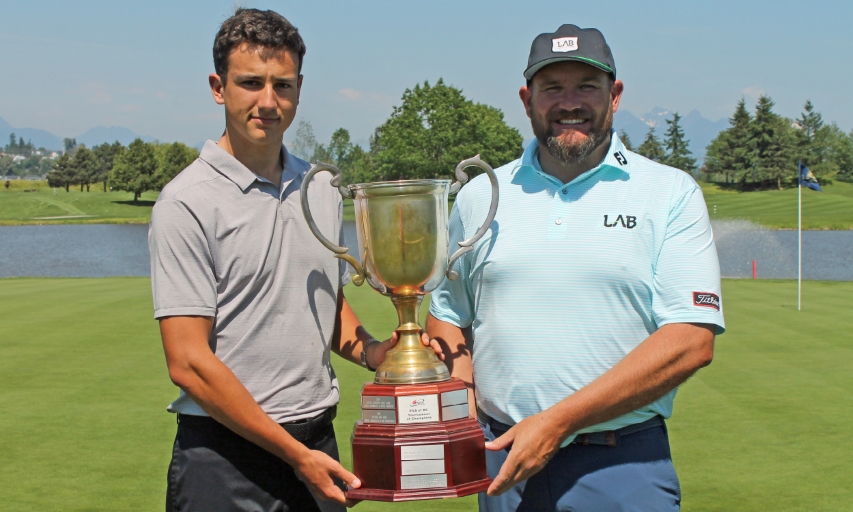 SURREY, British Columbia — The team representing The Tour LAB @ Northview put on a record-breaking performance for the second year in a row to defend its title in the PGA of BC Tournament of Champions presented by Tee-On Golf Systems Inc.

Professional Matthew Palsenbarg and amateur partner Jackson Jacob outlasted the Victoria Golf Club team of Lindsay Bernakevitch and Craig Doell in a playoff, after both squads turned in 11-under-par rounds of 61 on the Ridge Course at Northview Golf & Country Club.

The Tournament of Champions is a unique team event in which a PGA of BC Club Professional (Head, Executive or Head Teaching Professional) pairs with a club champion or designated amateur from their facility to compete in an 18-hole best-ball competition.

Not only did The Tour LAB become the first PGA of BC facility to win the Tournament of Champions in back-to-back years, the winning score also marked a new record for the event, both in total strokes and score relative to par.

“It was a lot of fun, obviously being at the home track (with a) great partner,” said Palsenbarg.

“Matt was a great partner to have out there today,” added the junior-aged Jacob. “He has a good attitude as he works his way around the course and he has a lot of expertise I can learn from.”

Jacob rolled in a 12-foot birdie putt on the first playoff hole –- played in alternate-shot format on the Ridge Course’s 18th –- to secure the win for his team.

“I was thinking, ‘Don’t hit it too hard,’ because I’d be the one that would have to hit it coming back and that would be pretty embarrassing to miss that one,” joked Palsenbarg. “So, luckily, he poured it in.”

Palsenbarg earned $1,000 for Monday’s victory, while Jacob took home a set of Srixon Z785 irons as the top amateur prize.

Jacob, who contributed eight birdies to his team’s total Monday, has been training under the guidance of PGA of BC Professionals at The Tour LAB for several years, and will be moving on to play for the University of Idaho Vandals men’s golf team this fall.

“I coached him early on and now he’s been working with John Shin for the last three years,” said Palsenbarg. “That’s why Jackson and I were such good partners today; we’ve always been good buddies, but … Johnny Shin definitely gets a whole lot of credit for this kid.”

The Tour LAB and Victoria Golf Club teams played together in Monday’s shotgun format, starting their day on the Ridge Course’s first hole and trading birdies throughout the day.

“They had us through the front nine, then we caught up and got ahead, but it was ruthless,” said Palsenbarg. The Victoria Golf Club twosome made birdie on each of their final three holes to make up a two-stroke gap on Palsenbarg and Jacob and force the playoff.

Bernakevitch and Doell also had an opportunity to make Tournament of Champions history of their own on Monday. Both entered the day looking for their third individual titles – they’ve each won with different partners and together as a duo in 2017 – which would have been a new high for both amateur and Professional competitors.

“We played great,” said Bernakevitch. “Whenever one of us was seemingly out of the hole, the other one was right there making par or birdie, so it was pretty stress-free, all in all.”

Doell added that playing with another hot team seemed to bring the best out of their entire foursome.

“We were kind of feeding off each other and pushing each other along,” said the two-time BC Men’s Mid-Amateur champion.

About Tee-On Golf Systems, Inc.
London, Ontario-based Tee-On Golf Systems Inc. provides a complete suite of premier golf-management software that allows facility operators to take greater control over their business, significantly increase their club’s efficiency and dramatically improve customer service. When you choose Tee-On as your golf technology partner, you're choosing to partner with a leader in the industry who understands that you want complete control over your business. Learn more by visiting www.tee-on.com.