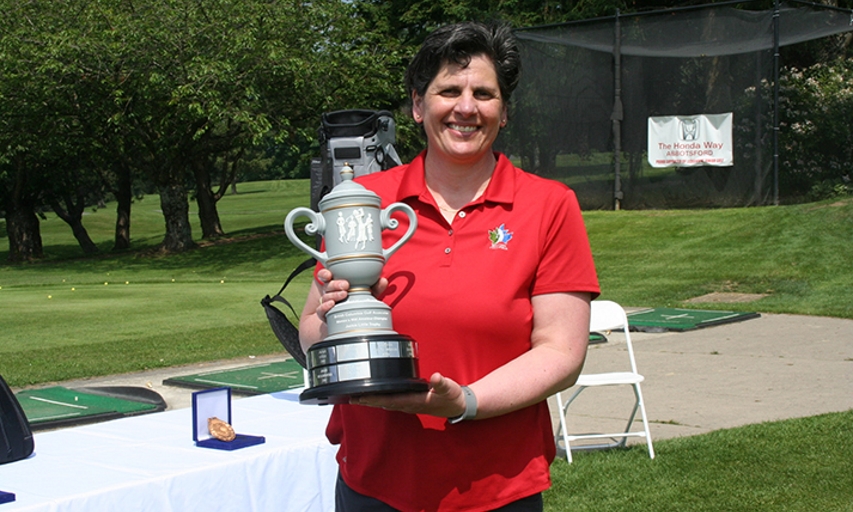 ABBOTSFORD, British Columbia — Shelly Stouffer was delighted with everything about her play at the B.C. Women’s Mid-Amateur Championship. Well, almost everything.

She wasn’t thrilled about her final hole. “I finished with a bang,” Stouffer said with a laugh after she four-putted the 18th green at Ledgeview Golf & Country Club on Thursday for her only double-bogey of the tournament. “I was trying to make the (birdie) putt. Oh well.”

Stouffer could have afforded to take three or four more whacks at it on the 18th green. The Nanoose Bay resident had arrived there with a seven-shot lead.

Stouffer, returning to a provincial championship for the first time in three years, finished the 54-hole event at eight-over par and beat Port Alberni’s Christina Proteau by five shots.

That’s the same margin she had when the final round started. Stouffer struck the ball beautifully all day. “It was stress-free, but I was nervous when I started,” she said. “I hit a pretty poor shot on the first hole. I managed to get my approach on the green but then I three-putted.

She quickly settled down and made few mistakes the rest of the way “I really enjoyed the course,” Stouffer said of Ledgeview’s demanding par-70 layout. “It sets up good for my game, I guess. I hit great shots. I hit like 15 greens today. I had three three-putts and a four-putt and still shot 74.”

Asked to describe what part of her game was especially sharp this week, Stouffer said: “I would say my iron shots were pretty good, my tee shots were really pretty good. Pretty much everything was pretty good.”

Proteau, the defending Mid-Amateur champion and a three-time winner of the B.C. Women’s Amateur, said she simply wasn’t able to capitalize on the few openings Stouffer gave her in Thursday’s final round. “I got one back on five and she hit it in the trees on six and I hit a good drive and what I thought was a really good 8-iron but it came up short and spun back,” Proteau said.

“I hit a great chip but we both made five. So there was a little opening there, but the openings only get bigger if you are able to take advantage. I’d get one back and then I’d give one back. Shelly definitely played much better over the last three days and made a ton of putts.”

Stouffer was looking forward to sharing the news of her win with her two boys, aged 11 and 13. Both are starting to play the game and were at home with their grandmother, getting daily updates from Mom. “They knew the situation and I think they’ll be pretty excited,” Stouffer said. “They are like, how do you hit it so good?’ And I’m like, well, years of practice.” 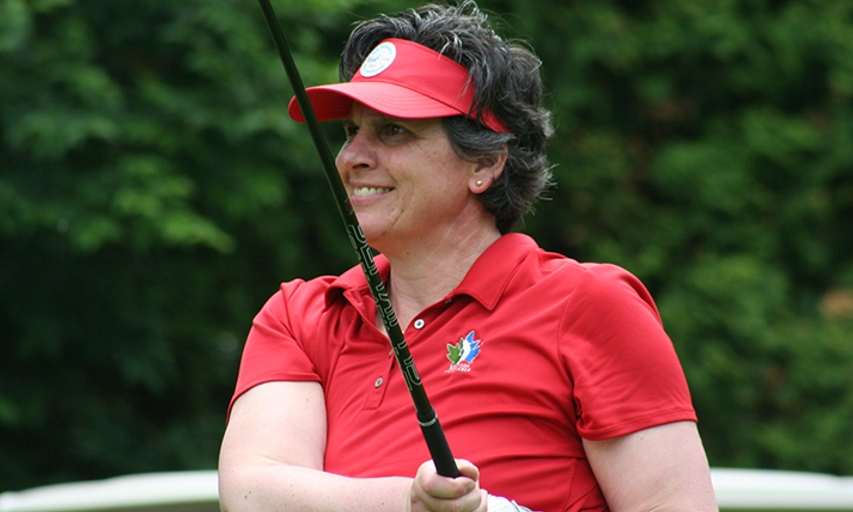 Shelly Stouffer Tees Off On 18 At Ledgeview Golf Club Heading Home With A 7-Shot Lead. (BC Golf/Bryan Outram)

The Mid-Amateur competition is open to players 25 and older. Stouffer also won, by a very convincing margin, the Mid-Master title for players 40 and older. She beat second-place finisher Tina Papatolis of Issaquah, Wash., by 17 shots.

Stouffer last played in a provincial championship in 2016, when she won both the Mid-Amateur and Mid-Master titles at Nanaimo Golf Club. Six months after that, she lost her husband Ward, a longtime British Columbia club pro, to a heart attack.

As a single mom with a full-time job -- she is a kinesiologist at a Nanaimo physiotherapy clinic -- it’s not easy to take time off to play big events. She won’t be able to play in the B.C. Women’s Amateur Championship, which is being played in July at Nanaimo Golf Club, because she has a family trip planned.

Stouffer, a UBC grad who played collegiate golf for the Thunderbirds, has a big birthday coming up on Dec. 31 of this year. She turns 50, which opens up the world of senior golf. “Oh yeah, it sure does excite me,” she said.