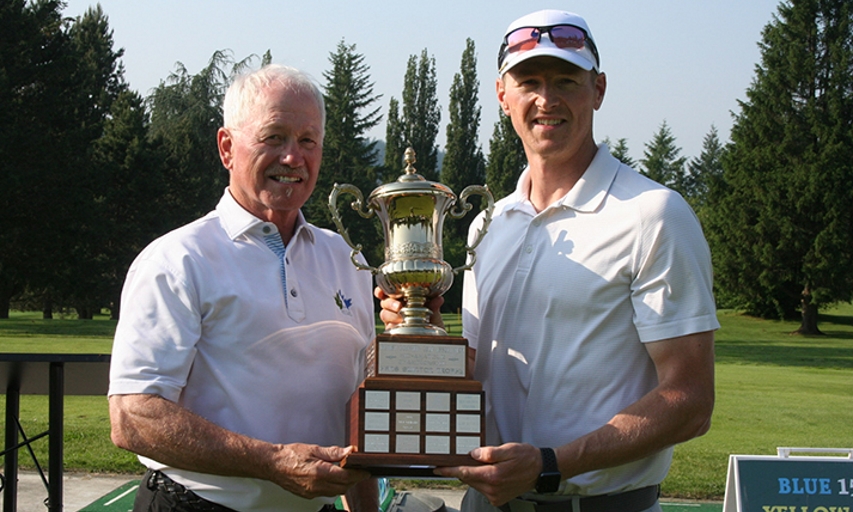 ABBOTSFORD, British Columbia — It was moments like this that Dan Swanson envisioned when he decided a couple of years ago to apply to regain his amateur status. A couple times on the back nine of Thursday’s final round of the B.C. Men’s Mid-Amateur Championship the 40-year-old found himself thinking back to past battles he’d had in provincial championship events in his late teens and early 20s. Those ones didn’t always end well.

He’d come close, losing a heartbreaker at the 1999 B.C. Amateur Championship at Storey Creek in Campbell River, for example. This time, 20 years later, Swanson sealed the deal with a brilliant back nine at Ledgeview Golf Club to finally claim that elusive provincial title.

“It’s crazy,” Swanson said. “I've been playing in BCGA events for how many years and this is my first BCGA win. It’s cool. It is something I have been working on for a long time. It is great to have a second chance at my golf career basically as an amateur. And it was special to have my dad (Dale) out there caddying for me.”

Swanson shot a five-under 30 on Ledgeview’s back nine to chase down Richmond’s Mike Aizawa. He birdied five of his last 10 holes to shoot a three-under 67, matching the low round of the tournament. “It was magical really,” Swanson said of his finish. “It was one of those back nines where I had flashbacks of going up against James Lepp in the 1990s. It was just crazy. It was fun.”

Swanson, who turned pro in 2003 after a successful collegiate career at the University of Texas-El Paso, was reinstated as an amateur early last year. He said he knew his professional career was done and he wanted to compete in big amateur events. He began Thursday’s final round four shots out of the lead and not really thinking about winning. It wasn’t until his back nine birdie barrage that he realized he had a chance.

He made a Houdini-like birdie on the par 5 finishing hole to post his 54-hole score of three-over par.  Swanson had attempted to hit the par 5 in two shots, but his 2-iron from 240 yards veered hard left into a treed area. He couldn’t take a full swing and had just a tiny opening through branches for his 75-yard shot. He also had to a carry a greenside bunker. 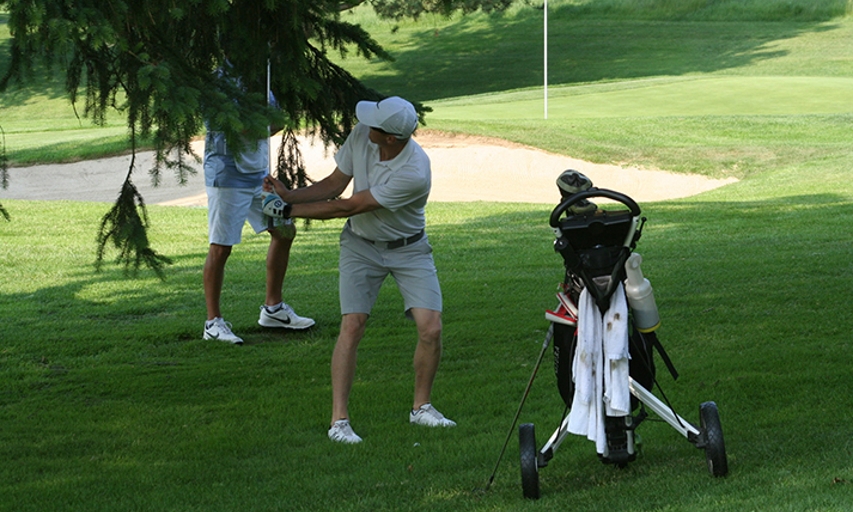 Dan Swanson Managed To Pitch This Shot Out Of And Over The Trees On The Final Hole To 3 Feet And Made The Birdie Putt That Would Lead To His Win In The BC Men's Mid-Amateur And Mid-Master Championships At Ledgeview Golf Club. (BC Golf/Bryan Outram)

He gripped down to the metal on one of his wedges and hit a perfect shot that ended up about three feet below the hole. He tapped the putt in for birdie. “I was just praying for a shot over in the trees and I had this small little hole,” he said. “You’ve got to get a good break once in a while, I guess, and it was just my turn. I had a branch in my backswing, but I just pictured the shot and hit it perfect.”

Swanson then had to wait to see how Aizawa finished. The Richmond Country Club member birdied No. 17 to tie Swanson at three-over, but then bogeyed No. 18 to finish one shot short. Aizawa’s troubles on 18 started when his drive went left and his ball ended up against some tree roots.

He had to just punch it forward and into the fairway. His 9-iron from 140 yards ended up on the back fringe and his chip went about seven feet past the hole. His par putt to force a playoff slid by the left side of the cup. “I had a pretty good read, but just hit it a little firm,” Aizawa said.

Swanson, whose girlfriend Nima is expecting their first child -- a boy -- in September, said his intimate knowledge of Ledgeview may have given him an edge. “I have played here more than 50 times over the years,” he said. “I love it, but I don’t remember it being this tough. It really forces you to hit it in the right spots. You can think you have hit a good shot to a green and you can be left with a super-tough putt. You just have to be very precise. You have to hit your driver dead straight and you have to be very creative. The greens are super difficult, so your short game is really tested.”

CHIP SHOTS: A two-man team best-ball competition was also held during the tournament. Kyle Gerard and Malachy Hagen, both of Abbotsford, won with a 54-hole score of 13-under par. That was two shots better than the team of Swanson and defending Mid-Amateur champion Jay Snyder of Vancouver.