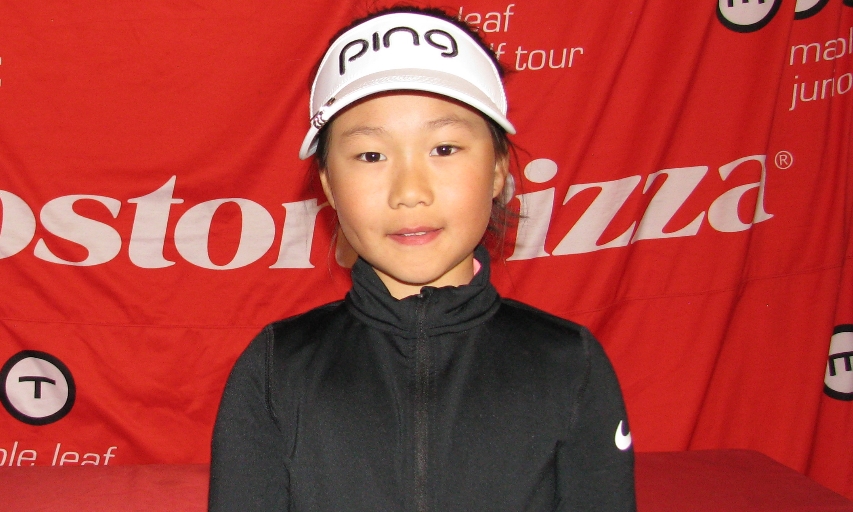 CALGARY, Alberta — On a beautiful sunny day in Calgary, a great turnout of young golfers aged seven to 12 highlighted the Maple Leaf Junior Golf Tour’s MJT Mini Tour Ford Series at EQ Calgary Douglasdale Golf Club this past Sunday, May 26. Complimenting the tournament was the Woodbridge Ford Go Golf! Junior Clinic that offered a free introduction to golf to beginners.

We begin in the MJT Boys 11-12 Division where a thrilling exchange took place between Lethbridge, AB-native, Jackson Wesley, 11, of Strathmore, AB (72), Parker Riou, 12, (73), and Edmonton, AB-native, Ryan Zhang, 12, (73). Through the first nine holes, Zhang took a two shot lead after shooting 36. However, after more back and forth exchanges, with two holes to go, Wesley moved into the lead by four shots over Riou, and even with Riou finishing par-birdie, he fell just one shot shy of Wesley who took home the trophy in the division. “I was the first group in,” said Wesley. “I was very nervous watching the scores come in and felt relieved after I won.”

Nine-year old Lucas Sturgeon, from Saskatoon, SK, in a surprising turn of events, captured the title in the MJT Boys 9-10 Division with a round of 85 over Calgary-local, 10-year old, Tyler Hennessy (86). Hennessy, with a three-shot lead going into the last hole, made an unfortunate nine on 18 to give Sturgeon the win. “I can’t believe I won,” said Sturgeon. “I made some great friends and I can’t wait to play with them again at the next event.”

The MJT Boys U8 title was claimed convincingly by eight-year old Jayden Arnold, of Calgary, AB, who carded a round of 75. “I got off to a great start,” said Arnold who birdied his first hole of the tournament. “From there I hit some good approach shots and made some great pars.” Finishing second in the division was eight-year old, Bennett Love, of Red Deer, AB who shot 84.

Playing in her second MJT Mini Tour event of the season was Calgary-local, Aleah Shields-Rodipe, 8, who won her MJT Girls 8U title this time around with a score of 86. “I worked hard to get this win,” said Shields-Rodipe. “I made a nice birdie and some good pars and a new friend!” Runner-up was eight-year old, Alessandra Sundquist from Calgary, AB (98).

Nine-year old, Eileen Park, of Red Deer, AB, shot 79 - good enough for a five-shot win in the MJT Girls 9-10 Division overEllie Johnson, 10, of Edmonton, AB. “I’m very proud of my win,” said Park. “It gives me a lot of confidence for my game and I’m looking forward to playing more events.”

Tessa Ion, 12, of Calgary, AB, came out to shoot 91 and take the title in the MJT Girls 11-12 Division. “I had fun playing,” said Ion. “Both the win and the pizza were the highlights of the tournament.”

Full results including PLYR Closest-to-the-Pin competition winners are posted on the MJT website here. Winners of the international exemptions will be announced once qualifying has completed across the country.

The next MJT Mini Tour stop in Alberta is in Red Deer at River Bend Golf Course on June 8. For more information or to register, please visitwww.maplejt.com or call 1-877-859-4653.

About the MJT
The non-profit Maple Leaf Junior Golf Tour presented by Boston Pizza is Canada’s number one-played Junior Golf Tour as well as the only national junior tour run exclusively by PGA of Canada Professionals and the ‘Road to College Golf’ in Canada. The organization is presented nationally by Boston Pizza and supported by valued Premier, Tournament and Product Partners. The MJT hosts close to 80 events across Canada, including free Ford Go Golf Junior Clinics, the MJT MiniTour for 7-12 year olds, the Collegiate Tour for 19-23 year olds, and multi-day events for competitive players aged 11 to 18 which are also qualifiers for international competitions. The program offers annual awards, scholarships, and frequent player incentives to help reward player's performance and participation throughout each season. MJT alumni include many Professional Tour players and PGA of Canada Professionals, as well as Canadian Amateur, National and Provincial Junior Champions. The MJT aims to develop champions, in golf and in life, promoting the game from grassroots through to provincial, national, university and professional level. See www.maplejt.com.