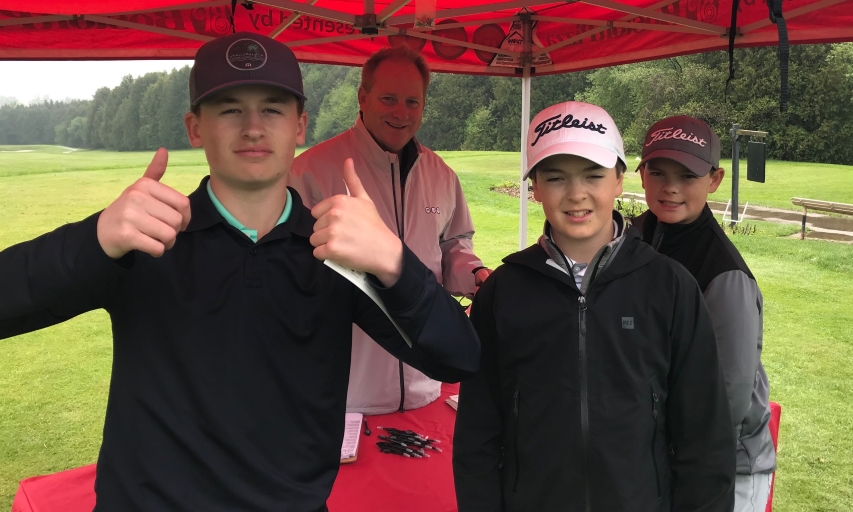 BROOKLIN, Ontario — Weather conditions once again affected play on the Boston Pizza-presented Maple Leaf Junior Golf Tour, with the first round of the MJT Ontario GTA Series at Lakeridge Links Golf Club in Brooklin being cut to nine holes, this past weekend, May 25 and 26, putting pressure on players to perform on day two.

We begin with the MJT Juvenile Boys Division where 16-year old, Dayton Price, of Mississauga, ON, opened day one with a nine-hole score of 40 and closed day two with a round of 77 (117), good enough to win the division by three shots over 15-year old, William Kekich (41, 79 - 120), of Toronto, ON. “I had some good holes and some bad holes during the tournament,” said Price who had two birdies and two eagles in his 27 holes. “I’m just happy to get the win.”

Toronto’s Bradley Parker, 14, captured the MJT Bantam Boys title with scores of 39 and 77 (116). Finishing second in the division was Mississauga’s Mitchell Grey, 14, who fired rounds of 40 and 82 (122). Parker, who had a one-shot lead after the first day, came out charging with three birdies on his front nine on the second day. “I had a good first nine holes on the second day,” explained Parker. “The three birdies gave me momentum to cruise to my win.”

The MJT Girls 15-18 Hoselton trophy was won convincingly by Oshawa, ON-resident, Megan Fitchett, 16. Fitchett shot scores 39 and 77 (116) while playing the difficult par threes at only plus-one for the tournament. “I’m happy to get the win, but I know I have more work to do,” said Fitchett. “I play on the MJT to improve my game and sharpen my skills and that’s what happened at this tournament.” Finishing second in the division was Melancthon, ON-resident, Morgan Rutledge, 16, who shot scores of 43 and 85 (128).

An intense east-west contest took place in the MJT Girls U15 Division between Maple, ON-player, Karolyn Zeng (43, 82 - 125), age 13, and 14-year-old Delta, BC-player, Sierra Stubbs (42, 84 - 126). Zeng, who trailed by one-shot after the first day and three shots with nine holes to go on the second day, made four clutch par saves on the difficult final stretch to come back and win. “I had a lot of fun playing in this tournament,” remarked Zeng. “My playing partners played great and even though Iwon, my favorite part of the tournament was making new friends.”

The MJT Junior Boys Division was taken convincingly by 17-year old, Derek D’Ortenzio, from Caledonia, ON, who previouslywon the recent MJT Humber College PGM Classic at Hidden Lake Golf Club. “I took a double on the third hole on the second day,” claimed D’Ortenzio. “But I came back and made two birdies right after and that got my round going.”

Matthew Medhurst, from North York, ON, came out to win the MJT Collegiate Division with rounds of 40 and 79 (119). “I was able to push through tough conditions,” said Medhurst, who made three birdies in the tournament.

For PLYR Long Drive, PLYR Closest-to-the-Pin and the MJT Booster Juice Comeback Award winners, please visit the highlights page here. Winners of the international exemptions will be announced once qualifying has completed across the country.

The next Maple Leaf Junior Golf Tour stop in Ontario is at Mystic Golf Club in Ancaster on June 1 and 2, which is also a shortlist qualifier for both the US Kids Teen and World Championships. Players can register online at www.maplejt.com or call 1-877-859-4653.

About the MJT
The non-profit Maple Leaf Junior Golf Tour presented by Boston Pizza is Canada’s number one-played Junior Golf Tour as well as the only national junior tour run exclusively by PGA of Canada Professionals and the ‘Road to College Golf’ in Canada. The organization is presented nationally by Boston Pizza and supported by valued Premier, Tournament and Product Partners. The MJT hosts close to 80 events across Canada, including free Ford Go Golf Junior Clinics, the MJT Mini Tour for 7 to 12 year olds, the Collegiate Tour for 19 to 23 year olds, and multi-day events for competitive players aged 11 to 18 which are also qualifiers for international competitions. The program offers annual awards, scholarships, and frequent player incentives to help reward player's performance and participation throughout each season. MJT alumni include many Professional Tour players and PGA of Canada Professionals, as well as Canadian Amateur, National and Provincial Junior Champions. The MJT aims to develop champions, in golf and in life, promoting the game from grassroots through to provincial, national, university and professional level. For more information, see  www.maplejt.com.