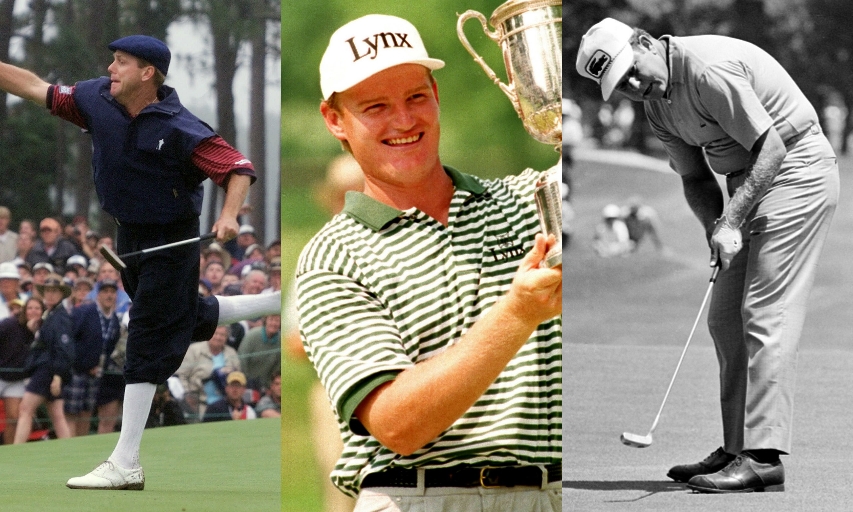 PEBBLE BEACH, Californa — A look at some of the anniversaries this year at the U.S. Open:

The U.S. Open resumed after a three-year break because of World War I, and Walter Hagen prevailed after a night on the town in Boston with Al Jolson and plenty of champagne. The 1919 U.S. Open at Brae Burn is more frequently referenced for the collapse of Mike Brady. He opened with rounds of 74-74, and then built a five-shot lead going into the afternoon 18. Brady stumbled to an 80 to lose the largest 54-hole lead in U.S. Open history. Hagen caught him with a 75, and then beat Brady by one shot with a 77 in the 18-hole playoff. Brady, who also lost in a playoff in 1911, never won a major.

The U.S. Open was not held for the third consecutive year because of World War II — only the PGA Championship was held that year. Even so, golf still managed a schedule of 23 tournaments. Byron Nelson played several events in support of war efforts. One held during a typical U.S. Open week was the New York Red Cross Open at Wykagyl Country Club in New Rochelle, New York. Nelson won with a score of 13-under 275.

Orville Moody remains part of U.S. Open history as the last player to win after going through local and sectional qualifying. He was three shots behind Miller Barber at Champions Golf Club going into the final round. Moody closed with a 2-over 72 while Barber fell apart with a 78. Moody held on to win by one shot over a pair of major champions, Al Geiberger and Bob Rosburg, and Deane Beman, who later became PGA Tour commissioner. Moody, a 14-year veteran of the Army known as “Sarge,” never won another PGA Tour event.

Arnold Palmer played in his final U.S. Open at Oakmont near his home in Latrobe, Pennsylvania. The tearful farewell when the King missed the cut gave way to a new star in golf — Ernie Els, a 24-year-old South African with a pure swing. Els had the 54-hole lead and closed with a 73, setting up a three-way playoff with Colin Montgomerie and Loren Roberts. Montgomerie wore all black in the suffocating heat and shot 78 in the playoff. Els and Roberts each shot 74 and went overtime, with Els winning on the second extra hole. Curtis Strange became the first player to break par all four days at a U.S. Open without winning. He missed the playoff by one shot.

Payne Stewart won the first U.S. Open played at Pinehurst No. 2 with a 15-foot par putt and a thrust of his fist that was memorialized in a bronze statue after he perished in a plane crash later in the year. This was as much about Phil Mickelson, carrying a pager with a pledge to withdraw if his wife went into labor. Mickelson thought the U.S. Open was his to lose until he bogeyed the 16th to fall into tie, and Stewart hit 6-iron to 3 feet on the par-3 17th for a birdie to take the lead. Stewart missed the fairway on the 18th, however, laid up and hit a lob wedge to 15 feet. Mickelson could only watch as Stewart made the par putt for his second U.S. Open. Mickelson’s oldest daughter was born the next day.

Lucas Glover won his only major on a Bethpage Black so soaked with rain that it took five days to get in 72 holes, and even then it came down to the wire. Mickelson, a runner-up at Bethpage Black in 2002, had another chance until missing a short par putt on the 15th. Hunter Mahan looked like a winner until his shot hit the pin on the 16th and caromed away. David Duval was back from a slump and was tied with two holes to play until an untimely bogey. Glover played a steady hand, closed with a 2-over 72 and won by two shots over Mickelson, Duval and 54-hole leader Ricky Barnes, who shot 76.