Goosen, Stephenson Among 5 New Members of Golf Hall of Fame 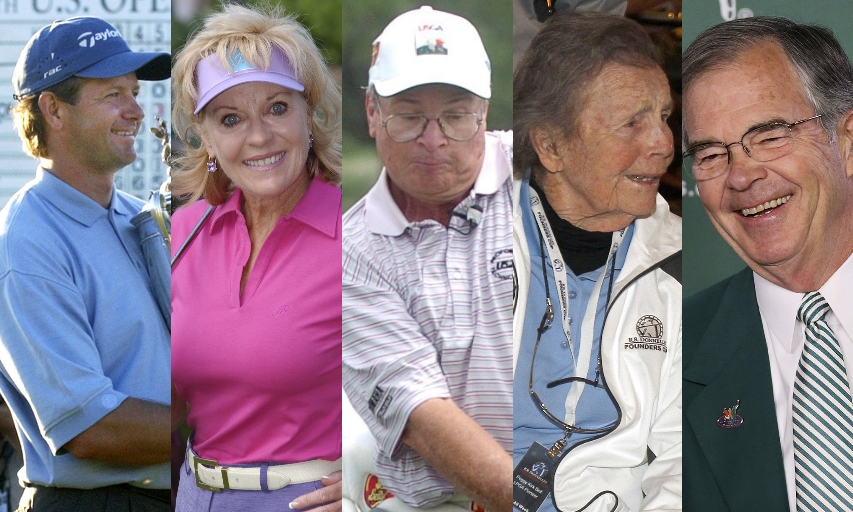 CARMEL-BY-THE-SEA, California — Retief Goosen woke up in a hospital room, learning later that his body was blackened, bloodied and lifeless from a lightning strike on a tiny South African golf course.

Dennis Walters couldn’t feel anything below his waist and knew his dream of playing professional golf was over.

They were among five people inducted into the World Golf Hall of Fame in a ceremony that celebrated success, vision, leadership and a pair of remarkable comebacks.

“The lightning sparked something in me,” Goosen said with a wry smile.

The induction is now every other year and coincides with big golf events — the U.S. Open at Pebble Beach in this case — with hopes of getting more of the game’s dignitaries to attend. There were 28 Hall of Fame members in the audience, many of them U.S. Open champions who will be honored at a dinner later this week.

The induction brings the World Golf Hall of Fame to 160 members. The final selection is by a 16-member panel, the majority golf administrators.

Goosen grew up in Polokwane, a town so small that it still has only one golf course with grass when it rains, sand when it doesn’t. Four days short of his 16th birthday, he waited out a rainstorm and headed back out on the course.

His friend was walking 20 yards ahead and was knocked to the ground by the lightning.

“He said he turned around there I was, smoking, no clothes, burned black from head to tail, blood,” Goosen said. “He ran to the next hole and there was a group of four guys. To my luck, one was a doctor. He was there in a few minutes and brought me back to life. When I woke up, I was in the hospital, covered in bandages, looking like a mummy. It was a lucky escape. ... Three weeks later, I was back on the golf course. And here we are today.”

Walters rolled onto the stage at Sunset Center in his wheelchair and was helped into a pair of walking canes. He took five hops to the podium to deliver a passionate speech about chasing dreams until they end, and then finding another.

A promising amateur, he was 24 when he was paralyzed from the waist down in a golf cart accident. Unable to compete, he found a way to swing from a swivel seat on the back of the cart. Driven to stay in the game, Walters became one of the most popular exhibitionists. He has traveled some 3 million miles to perform in 3,000 appearances, some of them with Tiger Woods.

“Can you believe I’m in the World Golf Hall of Fame before Tiger Woods?” Walters said with a smile.

He most remembers getting notified of his selection from longtime friend Jack Nicklaus and Gary Player, who are among four Hall of Fame members on the panel.

“I can’t walk. But when I got that call, I felt like I could fly,” Walters said.

He described the last 45 years of going “from the depths of despair to golf’s ultimate destination.”

Stephenson was among the first to bring sex appeal to women’s golf, part of that the design of former LPGA Tour commissioner Ray Volpe. Stephenson’s most famous moment outside the ropes was posing in a bathtub, her body covered only by golf balls.

“They were tumultuous and exciting times that launched my career in a slightly different direction,” Stephenson said.

She backed up her celebrity by winning 16 times on the LPGA Tour, including three majors. She was lacking only the Kraft Nabisco Championship — now known as the ANA Inspiration — to complete the career Grand Slam.

Stephenson was part of what she described as “the most competitive and colorful era” for the LPGA Tour, and several others from her generation — from Beth Daniel to Meg Mallon, from Juli Inkster to Pat Bradley — are in the Hall of Fame and watched from the audience.

Payne joins Clifford Roberts as the only Augusta National chairmen in the World Golf Hall of Fame. During his 11 years at the home of the Masters, he created amateur events in Asia and Latin America to inspire growth, and he was behind the invitation of the first female members of Augusta National.

“Unlike all of my fellow inductees, I know that I am the outlier here tonight,” Payne said. “So let’s be clear. It is Augusta National Golf Club that is being honored here tonight. It is the celebration of our efforts to help grow the game.”

Kirk Bell was the only posthumous inductee from this year’s class. One of the top amateurs in women’s golf in the years before the LPGA Tour began, she won the Titleholders by two shots over Patty Berg, the prestigious North and South Women’s Amateur and played on the 1950 Curtis Cup team.

She left her mark as a leading instructor who owned Pine Needles resort in North Carolina and spent a lifetime as an advocate for women’s golf.