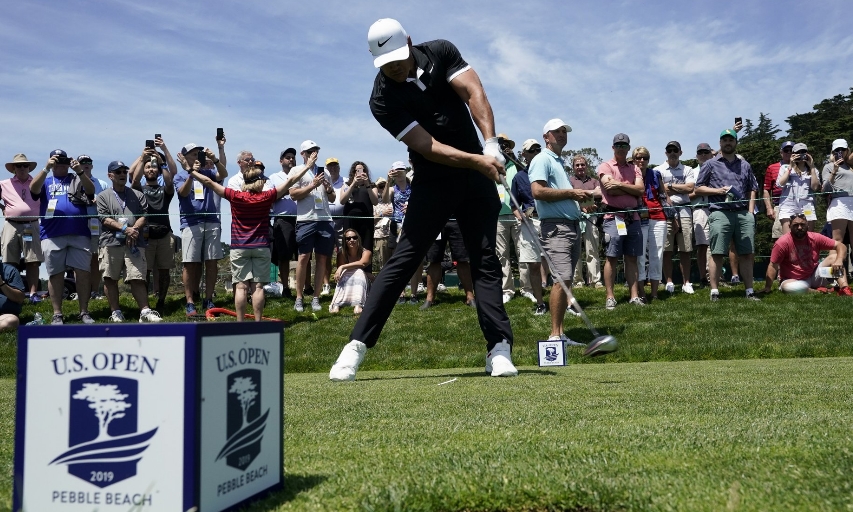 At stake is a shot at a U.S. Open record not touched in 104 years — three straight victories by Willie Anderson.

On his mind was a Fox Sports preview that Koepka interpreted as another example of him not getting the credit he deserves, another chip on his broad shoulder, another chance to prove everyone wrong.

“A bunch of people on Twitter I think tagged me in it — in the promo — and I guess they were amazed that I wasn’t in it,” Koepka said. “I just clicked on the link and watched it. Just kind of shocked. They’ve had over a year to kind of put it out. So I don’t know. Somebody probably got fired over it — or should.”

Was it a slight?

Fox had four U.S. Open promos, three of which included Koepka, one of them devoted entirely to Koepka and the history he can match. The other was entirely about Tiger Woods, the Masters champion who returns to the scene of his record 15-shot victory at Pebble Beach.

Koepka wasn’t clear about what shocked him. If there is any cause for a beef in the Woods promo, it was talk about passing the torch to the next generation and showing images of Rory McIlroy, Dustin Johnson and Jordan Spieth — but no Koepka.

The good news for Koepka?

He says it’s getting harder for him to hide when he’s out in public. He can feel eyes on him when he walks into a restaurant, and he’s not sure why all the fuss.

“I just view myself as a regular guy, just like everybody else,” he said. “And I just happen to be really good at golf. And that’s it.”

It was hard not to notice, maybe even appreciate, the interview room. Only six people attended his pre-tournament press conference last year at Shinnecock Hills when he was the defending champion, although it was late on a Wednesday afternoon. This time, it was hard to find six empty seats.

Koepka has everyone’s attention at Pebble Beach. He has won four of his last eight majors, a stretch of success only Woods, Jack Nicklaus and Ben Hogan have equaled in the era of four majors.

Even so, it’s another name that enters the equation this week.

Koepka recalls seeing Anderson’s name on a building in Scotland last summer, right after he won his second U.S. Open. By then, Koepka was vaguely aware that the Scottish-born Anderson had won the U.S. Open in 1903, 1904 and 1905.

“I just try to put that in the back of my mind,” Koepka said in a tone nearly as flat as his heart rate. “It’s just another golf tournament. I have to go out and do what I’m supposed to do. It’s going to be a tough test this week — we all know that.”

Four players have had a shot at three straight U.S. Open titles since then. None came particularly close. The most recent opportunity fell to Curtis Strange in 1990 at Medinah, where a 68 brought him within two shots of the lead until he faded to a 75 in the final round and tied for 21st.

“He says it’s another day, another round, another tournament,” Strange said. “It’s not. It’s the U.S. Open. He’s going for three in a row. But of anyone I’ve seen who walks the walk, it’s Brooks Koepka. He goes about his business in a professional way every day.”

Koepka realizes history is against him, and not just because it has been 104 years since anyone won a third straight U.S. Open.

The last player to win any major three straight times was Peter Thomson in the British Open (1954-56). Take even a stock PGA Tour event, and it has been eight years since Steve Stricker was the last to win the same event three years in a row at the John Deere Classic.

“I’m not thinking about it,” Koepka said. “I know the odds are stacked up probably even more against me now to go three in a row than to back it up. It’s hard to win the same event three times in a row.”

Spieth got a close look at Koepka last month at Bethpage Black when they played in the final group of the third round, when Koepka maintained his seven-shot lead with an even-par 70 as the course began to toughen.

Spieth was on a roll like this a few years ago. He won the Masters and U.S. Open was close in the other two majors of 2015. He lost a five-shot lead on the back nine at the Masters the following year. He won the British Open in 2017.

“He may be stoic on the golf course. I think that’s his level of confidence that he has and his level of focus that he’s been on,” Spieth said. “That mentality on the golf course seems to be coming from the confidence in every swing that he’s making. I’ve been in similar situations. And it’s really fun. And it’s also sometimes even more difficult to stay as focused as he’s been able to do.”

Spieth doesn’t like to hear phrases like Koepka being on a run because it speaks more of good fortune than simply good golf.

“This isn’t just a run. This is who he is,” Spieth said. “And he’s going to be a force to be reckoned with for decades. So get used to it.”