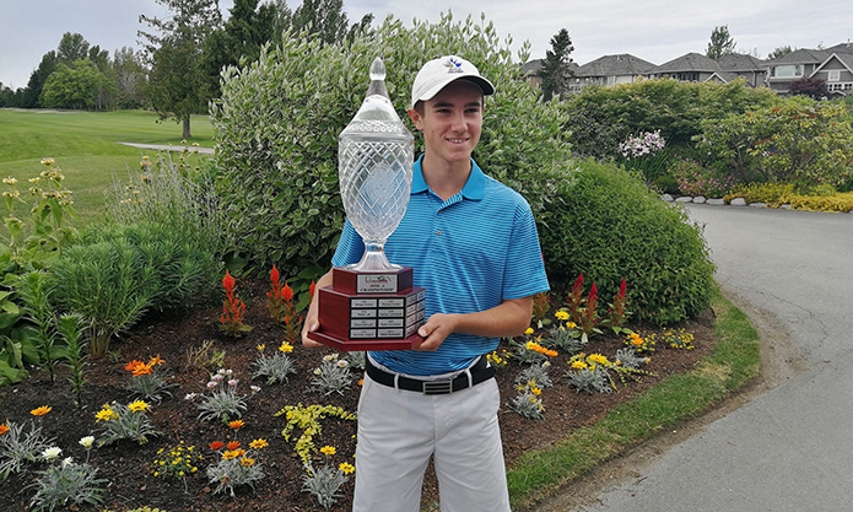 Delta’s Jace Minni, the reigning B.C. Juvenile Boys champion, added another title to his collection by winning the Vancouver City Amateur on the weekend.

The 17-year-old Minni, who just completed Grade 11 at South Delta Secondary School, finished the 36-hole event at six-under par to edge Trevor Yu of Vancouver by one shot.

Minni figures to be one of the favourites at the B.C. Junior Boys Championship, which goes July 2-5 at Fairwinds Golf Club in Nanoose Bay.

Roy Kang of North Vancouver and Matt Matheson of West Vancouver tied for third place at four-under par. The top 40 finishers at the Vancouver City Amateur earned exemptions into the B.C. Amateur Championship, which goes July 9-12 at Big Sky Golf Club in Pemberton.

Congratulations to Nick Taylor and his wife Andie, who are expecting their first child in November. Golf Canada helped deliver the news, tweeting a photo of the couple holding a U.S. Open logo’ed newborn outfit from Pebble Beach. Taylor made the 36-hole cut at the Travelers Championship, but did not survive a secondary cut after Saturday’s third round. He will be joined by fellow British ColumbiansRoger Sloan and Adam Svensson at this week’s Rocket Mortgage Classic at Detroit Golf Club.

Taylor enters the new Michigan event 105th on the FedEx Cup points list. Sloan is 119th and Svensson is 181st. Abbotsford’s Adam Hadwin, who is not playing this week, is 47th.

Eleven British Columbians are in the field for this week’s 98th playing of the PGA Championship of Canada at Whistle Bear Golf Club in Cambridge, Ont. They include past champions Jim Rutledge of Victoria and Bryn Parry of Seymour Creek Golf Centre in North Vancouver.

Kimberley’s Jared du Toit was the low Canadian at the Lethbridge Paradise Canyon Open, the fourth stop of the year on the PGA Tour Canada-Mackenzie Tour circuit.
Du Toit tied for 11th place at 14-under par, six shots behind winner Alex Chiarella of Hawaii. Du Toit earned a $2,500 bonus from Canada Life for being the low Canadian.

Chiarella’s win came as something of a surprise as the Maui native had missed the cut in the first three events of the Mackenzie Tour season. “There are so many negative thoughts when you miss cuts,” Chiarella said. “When I missed three in a row, I just wasn’t feeling good, but when that putt went in on the last hole, that was incredible. This is my first major, big win. It’s definitely huge.”

The Mackenzie Tour takes a break this week and resumes its schedule July 4-7 at the Windsor Championship in Ontario.

Jamie Hall of Seattle won the Vancouver Golf Tour’s Fraser Valley Open, finishing the 36-hole event at 10-under par. That was two shots better than runner-up Kaleb Gorbahn of Smithers. Hall opened the event with a four-under par 68 at Sandpiper Golf Course in Harrison Millsand closed with a six-under 66 in Sunday’s final round at Chilliwack Golf Club.

Canada finished sixth at the Toyota Junior World Cup in Japan. The Canadian team included Victoria’s Jeevan Sihota, who finished 34th in the individual competition at two-over par. Quebec’s Christopher Vandette led the way for Canada. He finished third overall at 13-under par.

Canada completed the 72-hole event at 14-under par. South Africa beat the 15-country field by 11 shots with a winning score of 41-under par.