Jim Rutledge Leads After First Round of PGA Championship of Canada 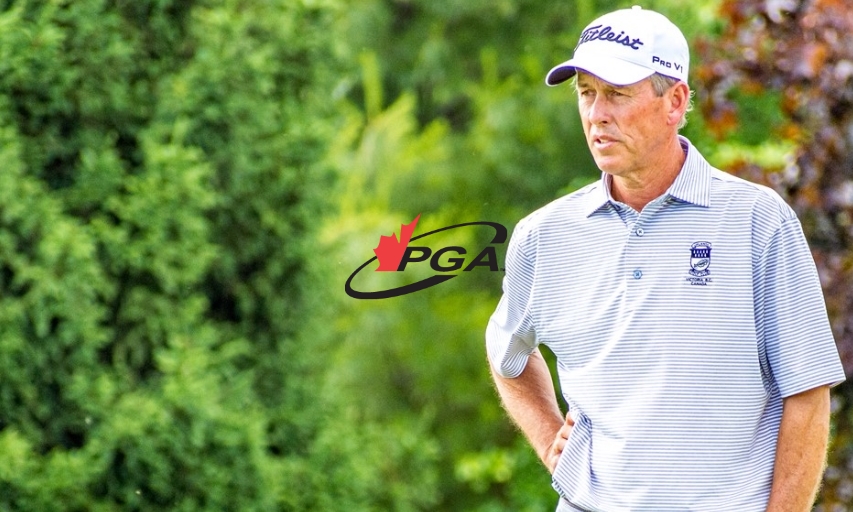 Jim Rutledge turned back the clock at Whistle Bear Golf Club for the first round of the PGA Championship of Canada presented by TaylorMade and adidas Golf.

The championship’s second-oldest player — who turns 60-years-old later this summer — torched a windswept Whistle Bear in Cambridge, Ont., posting an opening round 6-under-par 66.

Rutledge’s sizzler of an opener included seven birdies and just a single bogey on the second hole of the day.

“I got off to a bit of a shaky start with that bogey on No. 2, but got rolling after birdies on Nos. 4, 5 and 9 and then made some simple birdies on the back-nine to finish it off,” Rutledge said. “It’s not really a secret, but you’ve got to put yourself in the fairway out here because the rough is so unforgiving.”

A five-time PGA Seniors’ Championship of Canada winner and champion of the 1984 PGA Championship of Canada, Rutledge is clearly an artful veteran of the game of golf. The former Mackenzie Tour-PGA TOUR and Korn Ferry Tour says his love for the game and his fellow competitors keeps him motivated to keep playing well in tournaments.

“I really just enjoy coming out to these events and catching up with the fellas who I’ve known for a lot of years,” he says. “And, of course, I enjoy competing against them too.”

Rutledge is one of eight past PGA Championship of Canada winners in the field this week at Whistle Bear.

The 72-player field will be whittled down to the top-16 players following tomorrow’s second round. The final 16 will fill out the match play brackets with the eventual champion winning four match play rounds.

For the full leaderboard and second-round tee times, click here.

This week’s field features 43 of the top 50-ranked players from the RBC PGA of Canada Player Rankings presented by RBC are in the field, including the entire top 10.

Built on more than 230 acres, Whistle Bear is regarded as one of southern Ontario’s most distinctive golf destinations. Host of the 2004 and 2005 PGA Championship of Canada (as part of the Korn Ferry Tour schedule), the links-style venue features more than 100 bunkers throughout the 18 holes, as well as water on more than half of the holes.

PGA of Canada Player Rankings presented by RBC points are also up for grabs at Whistle Bear. The eventual winner will take home 60 points, with the runner up gaining 50 points. The player who earns the most ranking points (in national and zone events) in 2019 will be awarded the Mike Weir Player of the Year crown at next year’s Canada Night.

Attendance to the PGA Championship of Canada and presented by TaylorMade and adidas Golf Canada is free and spectators are encouraged to attend during championship play.