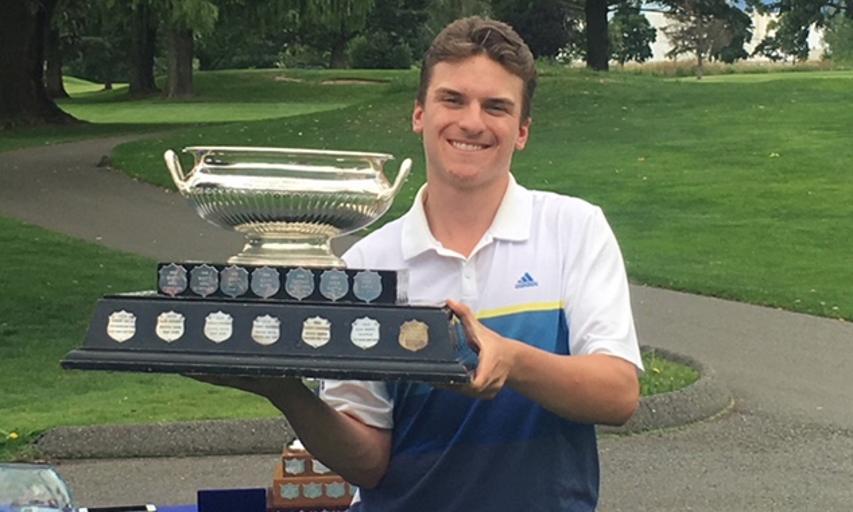 Burnaby’s Ilirian Zalli will defend his title at the B.C. Junior Boys Championship at Fairwinds Golf Club in Nanoose Bay. Zalli clinched last year’s championship at Kamloops Golf & Country Club with a brilliant eight-under 64 in the final round. Zalli finished the 72-hole event at 16-under par and won by four shots.

Vancouver’s Song Bai, who finished second last year, is also in the field at Fairwinds. The tournament begins Tuesday and runs through Friday.

The B.C. Junior Girls Championship is being run concurrently at Nanoose Bay. A new champion will be crowned as last year’s winner, West Vancouver’s Phoebe Yue, is no longer age-eligible.

Oliver Tubb of Vancouver’s University Golf Club made it all the way to the final of the PGA Championship of Canada at Whistle Bear Golf Club in Cambridge, Ont. Dustin Risdon of Calgary beat Tubb 3&1 in the final.

Tubb was one of four British Columbians who advanced to the 16-player match-play portion of the tourney.  Former champion Bryn Parry of the Seymour Creek Golf Centre in North Vancouver beat Calgary’s Wes Heffernan 2&1 in the consolation final.

Kevin Stinson of Cheam Mountain in Chilliwack and Champions Tour veteran Jim Rutledge of Victoria were the 36-hole stroke-play medalists at five-under par. Both players lost in the first round of match play.

Sandra Turbide of Maple Ridge won the Washington Senior Women’s Amateur Championship at Sudden Valley Golf Course in Bellingham. Turbide beat Karen Johnson of Auburn, Wash., on the second hole of a sudden-death playoff. Both players had finished the 36-hole competition at 14-over par.

Surrey’s Adam Svensson missed the cut after thinking a strong finish in Friday’s second round would get him through to the weekend. Svensson birdied his final three holes Friday to post four-under par, which was the current cutline. But the cut moved to five-under par late in the day and Svensson was out. Svensson dropped to 184th on the points list.

Svensson, Sloan, Taylor and Abbotsford’s Adam Hadwin are all in the field at the 3M Open at the TPC Twin Cities in Blaine, Minn.

Windsor is the fifth stop on the 12-event Mackenzie Tour.

John Shin won the Vancouver Golf Tour’s Ledgeview Open by three shots. The Lab at Northview pro shot rounds of 61 and 69 for a 36-hole total of 10-under par. He earned $5,000 for the win. Kevin Spooner of West Vancouver finished second and took home $2,500.

Vancouver resident Stephen Ames tied for sixth at the U.S. Senior Open. Ames finished the event at five-under par. that was 14 shots behind winner Steve Stricker, who beat the field by six shots ... Isaac Weintraub of Salt Spring Island Golf & Country Club fired rounds of 69 and 65 to win the Cowichan Open at Cowichan Golf Club. Weintraub’s six-under total was one shot better than Tristan Mandur of North Cowichan. . .Richmond’s Chris Crisologo and Jeevan Sihota of Victoria are in the field for the 25th Sahalee Players Championship in Sammamish, Wash. The 72-hole competition concludes Wednesday.