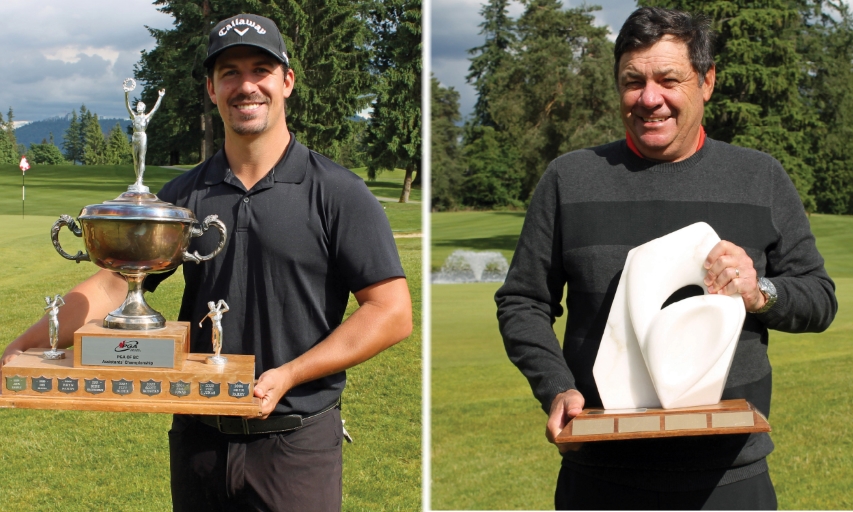 Rasmussen (Delta Golf Centre) followed up his first-round 68 with a 1-under-par final round of 71 to reach 5-under overall, earning a one-stroke victory and a winner’s cheque worth $3,000.

Rasmussen began the day in a share of the lead with Renfrew and fended off challenges from several competitors, as five-time Assistants’ Championship winner Bryn Parry (Seymour Creek Golf Centre) and Nate Ollis (Cordova Bay Golf Course) were also in the mix before finishing fourth and fifth, respectively.

“It’s awesome to win anywhere, and to win this tournament against some great players and fellow colleagues feels really good,” said Rasmussen.

The 27-year-old found himself trailing Renfrew by one stroke with three holes to play, but rolled in a 15-footer for birdie on No. 16 and stiffed a wedge to within inches of the cup on No. 17 for another birdie that gave him the lead for good.

Rasmussen made what appeared to be a costly bogey at No. 18, but Renfrew’s par attempt to force a playoff missed the mark.

“It was back-and-forth … and I got a little lucky with Cory and I both unfortunately three-putting at 18 to get the win,” he said.

Although it wasn’t the final result he was looking for, Renfrew earned his best finish in a PGA of BC event by sharing runner-up honours.

“It was fun to compete again even though it was a disappointing finish,” said Renfrew. “Andrew played well all day. I think we all went back and forth with birdies and bogeys, so it wasn’t too solid from any of us, but he played well enough to come out on top and congrats to him.”

Stinson made an early run by playing the front side in 4-under, but ran out of steam on a back nine that played tougher for most of the field both days.

“It was still a good day,” said Stinson. “I don’t know this golf course that well, so a couple of spots I was just not in the right spot, and if I’d have putted like I did on the front nine it might have been a different story. I’m really happy with how I played.”

Rasmussen is in his second full season as a PGA of BC member. He had virtually quit golf until he was compelled by an offer to become a Golf Professional and start teaching at Delta Golf Centre.

“The rest is history,” he said. “I got back into tournament play and I’ve been lucky enough to find some form and start playing some really good golf.”

Click here for final results from the Assistants’ Championship presented by Natera Sport.

In the Seniors’ Championship, Jonas was the steadiest of the four players who began the day tied for the lead at even-par, shooting a final-round 74 to win the tournament at 2-over.

“They’re all special,” Jonas said of his three Seniors’ Championship titles, as he also won the event in 2015 and 2016. “But when you get older, it becomes more difficult. There’s always new guys turning 50 and I’m going the other way. So any time you win, it’s special because of that.”

“I don’t think you can try and win it. I think what you’ve got to do is just play your game and see what happens, and that’s what I did,” said Jonas, who took home $1,400 for the victory. “I don’t think any of us played our best, that’s for sure, but it worked out OK for me.”

Rodgers got out to an early lead, reaching 2-under on the front nine before a difficult stretch to start the back saw him fall to 4-over. Hastie and Kristmanson, meanwhile, charged up the leaderboard for a share of second play with rounds of 70 and 71, respectively.

Troy Dunning (Camosun College) rounded out the top five at 5-over. The Super Senior Bonus, worth $150 and awarded to the top 60-plus player in the field, was split by Roy Abbenbroek(Seymour Golf & Country Club) and Jim Goddard (Cordova Bay Golf Course) at 8-over.

Click here for final results from the Seniors’ Championship presented by Natera Sport.

Seymour Golf & Country Club was a tremendous host for this week’s tournaments, earning rave reviews from players in both fields.

“The course was immaculate, the greens were fast, they were the right firmness, the rough was penal so you had to hit fairways,” said Rasmussen. “It’s a shorter golf course … but you had to be strategic, and the pin locations were fair but tough.”

About Natera™ Sport
Natera™ Sport is a division of Naturally Splendid Enterprises Ltd. and producers of Natera™ Sport Bites. Naturally Splendid Enterprises Ltd. is a health-based consumer products company that is developing, producing, commercializing, and licensing an entirely new generation of plant-derived, bioactive ingredients, nutrient-dense foods, snacks and related products. Additionally, Naturally Splendid’s biotechnology division is building an expanding portfolio of patents (issued and pending) and proprietary intellectual property focused on the commercial uses of industrial hemp cannabinoid compounds, focusing on cammabidiol, in a broad spectrum of applications. Natera™ Sport Bites were developed under the supervision of Victoria’s Dr. Stuart Love, who travels with the PGA Tour as a healthcare practitioner for several of the world’s top players, including multiple major champions. Visit www.naturallysplendid.com to learn more.