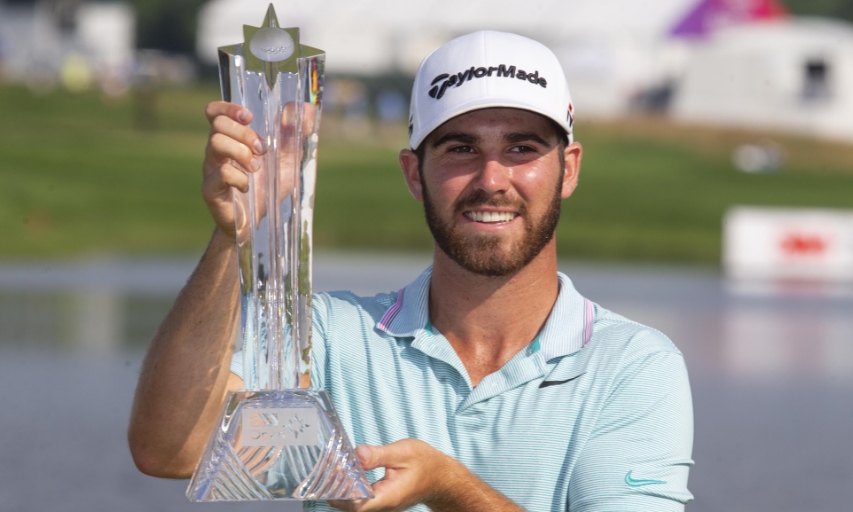 He took home a trophy and a PGA Tour card.

Even if the 20-year-old was playing the 3M Open on a sponsor exemption in a field with far more accomplished players, Wolff’s time as an amateur provided plenty of experience to sharpen both his competitiveness and confidence. That sure showed on the 18th green.

Wolff made a 26-foot putt from the fringe for an eagle on the final hole to finish at 21 under par on Sunday, beating Collin Morikawa and Bryson DeChambeau by one stroke in a tense finish to the first-time PGA Tour event.

“I completed everything I wanted to in college and now I’ve done something that very few people could say they’ve done, and it makes me really happy,” said Wolff, who became the first player since Jordan Spieth in 2013 to win a PGA Tour event before his 21st birthday.

Wolff struck his second shot on the 573-yard, par-5 hole from the fairway to the far left of the green, where it landed just a few feet away from a bunker. He proceeded to sink the dramatic putt in front of a packed 18th gallery at the TPC Twin Cities.

“I’m usually not an emotional guy at all, but tears definitely came to my eyes when I stepped off and picked that ball up out of the hole,” Wolff said.

Morikawa had the opportunity to forge a tie, but he just missed his eagle attempt from 22 feet away in the middle of the green. When the ball rolled on the left edge and about 3 feet too long, Morikawa winced.

“I hit a really good putt. I thought it was good from the start and once it got about halfway I knew it was a little low. What can you do?” said the 22-year-old Morikawa, who also turned pro this summer. His putt for birdie on the 17th horseshoed out.

The pair of newbies, who once played against each other on the California high school circuit and shared the lead with DeChambeau after the third round at 15 under, embraced on the green. Then Wolff began the celebration of the $1.152 million prize and an automatic two-year exemption on the tour.

“I’m a 20-year-old and I’m saying, ‘job security,’ but it really is,” Wolff said. “I knew as soon as I left college that I’m out here with the best players in the world and I’d have to prove myself, and I did that.”

DeChambeau, playing directly in front of the Morikawa-Wolff pair, had just finished his up-and-down afternoon with an eagle to take the short-lived lead at 20 under. The lively crowd, which went five rows deep behind the ropes near the final green, roared when DeChambeau crushed his second shot 204 yards from the intermediate rough onto the green within 6 feet of the pin. The world’s eighth-ranked player sank that putt to post one of seven eagles on 18 during the final round in yet more humid, wind-free conditions. DeChambeau, who had two of his three bogeys in the tournament on Sunday, figured he was headed for a playoff as he walked off.

“It’s so competitive now. Anyone can win on any week. It’s absolutely impressive,” DeChambeau said.

Canadian Adam Hadwin was fourth at 18 under. Carlos Ortiz finished in a tie for fifth with Wyndham Clark at 17 under after using seven birdies, including three of the last four holes, to shoot a 64. Ortiz, a native of Mexico still seeking his first tournament victory as a pro, had missed the cut in seven of his previous 10 events.

Lucas Glover landed in a six-way tie for seventh place at 16-under, after teeing off 4½ hours before the Morikawa-Wolff group. He posted a best-of-the-round 62, the fourth golfer in as many days here to reach 9 under. Glover, who won the U.S. Open in 2009 for his only major victory and just the third of his PGA Tour career, racked up 10 birdies to solidify his fifth top-10 finish of the season. He said he’d watch the rest of the round from the couch, rather than sticking around to see if his top score at the time would beat the odds and hold up.

Tom Lehman, who led the redesign of this course about 20 miles north of Minneapolis that hosted a PGA Champions Tour event from 2001-18 in the process of lengthening and strengthening it for the bigger hitters on golf’s main stage, posted his first over-par round of the tournament (73). The 60-year-old native of Minnesota finished at 7 under for the week, one stroke better than Brooks Koepka.

Koepka, who began the event in the top spot in the official world rankings and second in the FedEx Cup standings behind Matt Kuchar, never found a groove this week and posted his second 72 of the event.