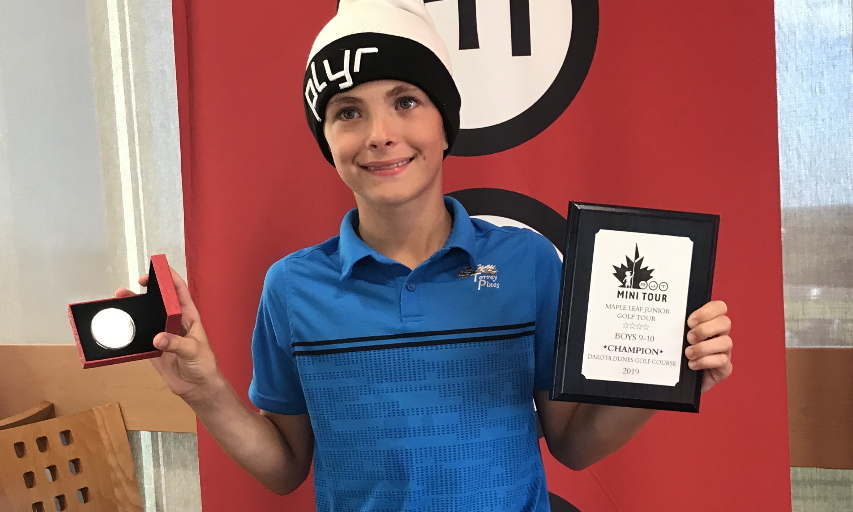 SASKATOON, Saskatchewan — The Boston Pizza-presented Maple Leaf Junior Golf Tour held the MJT Mini Tour for players aged 12U at Dakota Dunes Golf Links in Saskatoon, SK, on July 22, where an eager field of young players between the ages of four and 12 competed in four divisions over 18 holes.

Seven-year-old Keaton Kreklewich, of Melville, SK, impressed the crowd winning the MJT Boys 8U Division with a score of 77. The MJT Mini Tour rookie, playing in his third event of 2019, entered the winner’s circle after two previous top three finishes. Coming in second place was eight-year-old, Saskatoon, SK-player, Peyton Olynick, who shot 80.

The MJT Boys 9-10 winner was nine-year-old, Lucas Sturgeon. The Saskatoon athlete shot an 83 to win his second mini tour tournament of the year after holding off Jackson Giesbrecht, 9, of Warman, SK (93).

Capturing the MJT Boys 11-12 Division by a two-shot margin was 11-year-old Ayden Ross, of Swift Current, SK. Ross made two birdies in his last five holes on his way to an 86. “Everything about the tournament was enjoyable,” said Ross after the round. “Being able to go out and play golf against other golfers my age is lots of fun.” Coming second with an 88 was Saskatoon’s Jack Maharaj, 11.

In the MJT Girls 9-10 Division, Poppy Hudye Baranesky, 10, of Saskatoon, came out on top with a score of 107. Baranesky has continued to improve her game in her first year on the MJT mini tour, shooting 14 shots lower than her first 12U event back at Moon Lake. Runner-up was Grace Odnokon, 9, also of Saskatoon, (112).

Full results including PLYR Closest-to-the-Pin competition winners are posted on the MJT website here. The next 12U event in the province is the MJT Mini Tour at The Legends Golf Club in Warman on August 25. Registration for the event is online at www.maplejt.com.