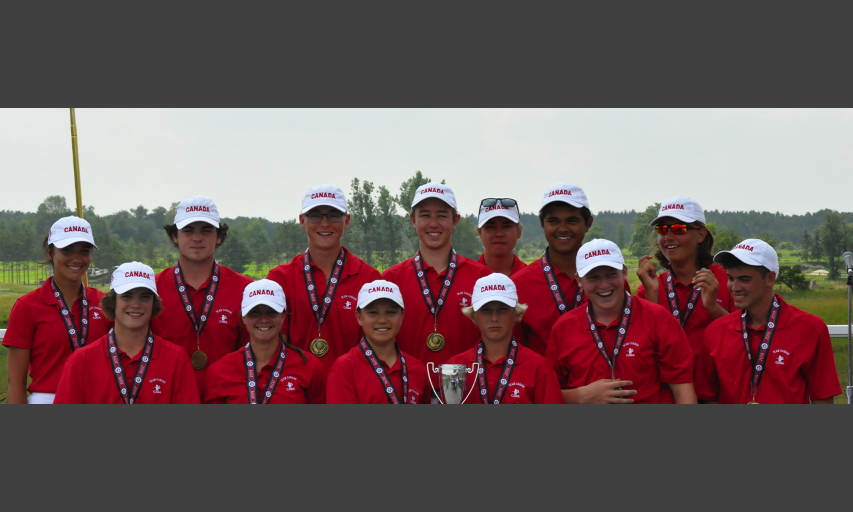 CALEDON, Ontario — For the first time in the event’s 17-year history, the Canadian side made up of CJGA members captured back-to-back titles at the North America Cup.  Needing just four points out of a possible twelve heading into today’s singles matches, CJGA Team Canada split the points evenly, 6-6, to capture the North America Cup by a score of 14.5 – 9.5.

The day off in the Americans favour as 5 of the first six matches started out with the American side up early on the front nine.  That would not last however as the Canadian girls, Sarah Cumby and Yasmine Qureshi, settled in and were able to capture both matches and get two quick points on the board.  They finished the event undefeated, capturing all four points available.

The Bantam Boys division were the second group out, facing a stiff test in their American counterparts.  Canadians Nathan Szpakowicz and Tanner Cardwell played solid golf all week, falling just shy in the fourball and foursome formats on the 18th hole both days.  Today ended in similar fashion, as American Jeep Patrick sunk a winning putt on the 18th hole for the third consecutive day to defeat Szpakowicz 1UP, while Nick Ciocca defeated Cardwell 5&3 to capture all four points for the American side in the Bantam Boys division.

“I am so happy for the players and the effort they put forth this week” stated an elated Ryan Shaw, CJGA Team Canada non-playing captain.  “From the moment we came together at the residence, I could tell this group would be special.  They bonded on and off the course, and I think that went a long way in them digging deep and playing for each other.”

The Junior Boys division were the last groups out, knowing somewhere in this group the Cup would be decided.  After Logan Hawke defeated Alex Burnett in the sixth match, CJGA Team Canada was just one point away from hoisting the Cup for the second consecutive year.  With many of the matches close heading to the back nine, it would be Ryan McAskill’s 5&4 victory over Chandler Brewer that would clinch the fourth and deciding point to keep the North America Cup in Canada for a second consecutive year.

“I know the memories and friendships created this week will last a long-time” stated Shaw.  “It has been a tremendous week and cannot thank TPC Toronto, the juniors from both sides, and CJGA staff for such an amazing experience and opportunity.”

Conditions were perfect all week long for the annual Ryder Cup format event, that landed on the Heathlands Course at TPC Toronto for the first time in the events history.  The North America Cup will head south of the border in 2020 as the IJGT will host for the eighteenth playing of the event.

Through its six-stage competitive development program that focuses on tournaments, clinics, international competitions, and mentoring programs with PGA Tour professionals, the CJGA introduces the game to juniors as young as five and offers competitive multi-day events for the more advanced golfer. The CJGA acts as a feeder system to provincial and national competitions, collegiate and university golf, as well as professional and recreational golf. For more information, please visit www.cjga.com.

The Canadian Junior Golf Association is generously supported by its National Partner, Freedom 55 Financial, which provides financial security advice and planning for Canadians.