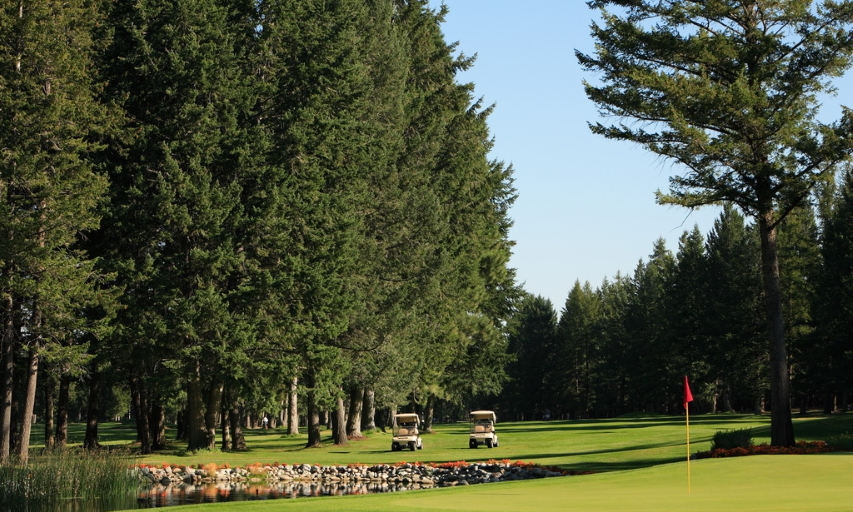 British Columbia kicked off a ten-day stretch of Championship Blind Golf in Creston, BC with the first-ever BC Provincial Championships, July 5th and 6th. The Championships had five BC players participating and two who were newcomers to blind golf.

As one can see when looking at the results, both had success in their first championships. The Creston Golf Club provided a challenging course for these championships and Mother Nature also cooperated and provided great weather for the 36 holes of championship play.

This event would not have happened without the strong support and sponsorship of British Columbia Golf and BC Blind Sports and Recreation. In addition, this event was well supported by local sponsorship support and we would like to recognize their support and promotion of blind golf in Creston. 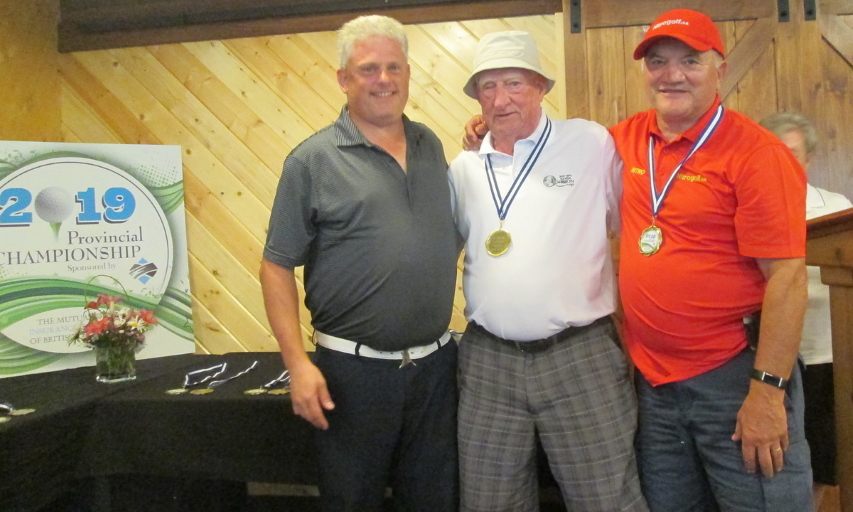 The 2019 Western Canadian Championships and the 2019 ISPS HANDA Canadian Championshipsconcluded in Kimberley and Cranbrook July.  Both events were blessed with great weather along with an overwhelming amount of praises from all participants. Both Bootleg Gap and St. Eugene courses were in exceptional condition and provided the participants with great beauty, along with the vast overwhelming scenery.

Both events also had an overwhelming amount o f participation. Along with 31 Canadians, the field was also made up of 7 players from the USA, as well as players from England, Scotland, Northern Ireland, Israel, Mexico, and South Korea.

Prior to these events, Bootleg Gap also hosted the official opening ceremonies to kick off these international Blind Golf Championships. In attendance to welcome our visitors was the Mayor of Kimberley, Don McCormack, MLA of Columbia-Kootenays, Wayne Stetski and Ktunaxa Nation Director, Kathryn Tenesse.

A local piper started the ceremonies by marching in all the country flags being represented at these events, including the Ktunaxa Nation’s traditional flag. These flags were proudly carried by the local Kimberley-Cranbrook Special Olympics, along with several representative players, and Kathryn Tenesse.

The Western Canadian Championships at Bootleg Gap was a stableford event along with gross stroke play for the men. The results were as follows:

Overall Low Net Stabeford Champion was Tyler Thompson from Lexington Kentucky along with his guide Lawrence Ward of Creston, BC.

Overall Low Net Runner-Up was Jason Bastable and his guide Ben Skym, both from England.

Overall Senior runner-up was George Thirkill and coach Nitro Rite from Langley, BC.

Ladies Overall Champion was a newcomer from Victoria, BC, Julie Moroney and her coach Pearse Moroney.

In the B1 Men’s Gross category we have golfers with no vision (light perception).  The Men’s B1 Gross Champion is the World’s number one B1 golfer and reigning world Champion, Zohar Sharon and his coach Shim Shon Levi from Tel Aviv, Israel.

The B1 Men’s Low Gross runner-up was also a newcomer from Aguascalientes, Mexico, Ricardo Silva and his coach Ismael Delgado.

In the B2 Men’s Gross Category (players with about 5% vision) the champion was another newcomer from Medford Oregon, Britton Munoz and coach Larry Douglas.

Finally, in the B3 Men’s Gross Category (Players with about 10% vision) the champion was Kiefer Jones of Calgary, Alberta and coach Jim Currie from Mervin, Saskatchewan.

B3 Low Gross Runner-Up was Glenn Babcock and coach Lois Babcock from Thornhill, Ontario. Glenn, who has never shot lower than '80' in his golf career, finally broke 80 in our Western Championships shooting a score of 77.

All participants had such an amazing experience at Bootleg Gap and General Manager Trevor Simkinsand all the wonderful staff at Bootleg Gap are commended for making our Western Canadian Championships successful and memorable for all involved.

The Overall Low Net Runner-Up was George Thirkill and coach Nitro Rite from Langley, BC

Thirkill was also Overall Seniors Canadian Champion, but spreading the awards, the Senior Champion was awarded to Doug Penner and coach Charlotte Penner from Winnipeg, Manitoba.

The Senior Low Net Runner-Up came down to a tie between Howard Colwell and coach Davit Butt of Creston, BC and Victor Goetz and coach Mary Goetz of Winnipeg, Manitoba

The Overall Ladies Low Net Runner-Up was Lillian Has of Winnipeg, Manitoba and coach Kay Montgomery from Mervin, Saskatchewan

The Overall ladies’ Low Gross runner-up was again a newcomer, Julie Moroney, and her coach Pearse Moroney from Victoria, BC

The Overall B2 Low Gross Champion is the reigning B2 Canadian Champion, Derek Kibblewhite and coach Lindsay Anderson from Calgary, Alberta

The B2 Low Gross Runner-Up was Tyler Thompson from Lexington Kentucky and coach Lawrence Ward of Creston, BC

The B3 Low Gross Canadian Champion is the World number one B3 Golfer, and two-time World-reigning Champions, and now three-time B3 Canadian Champion, Kiefer Jones of Calgary, Alberta and his coach Jim Currie from Mervin, Saskatchewan

The B3 Low Gross Runner-Up is Darren Douma and coach Walter Harder of Creston, BC

These Championships were very exciting and were also made more exciting by one of the B2 players from Redcliff, Alberta, Roy Bert. Bert made one amazing shot on the Par 3 seventh hole at St. Eugene in his final round by rolling in his first hole-in-one of his golf career.

Memorable as it was, Bert would have liked to have made this hole-in-one during the Charity practice round on the Thursday because there was a $10,000 hole-in-one prize on that hole sponsored by Lazy Bear Lodge. Bert and coach George Goulder of Creston were very happy with the shot and were recognized by St. Eugene Head Professional Cindy Soukoroff during the awards dinner.

The 2019 ISPS Handa Canadian Championships were well hosted at St. Eugene Golf Resort by Head Professional Cindy Soukoroff and all her friendly and hard-working staff. All staff made our stay and our golf very memorable and unforgettable. All participants could not say enough about how breathtaking the golf courses were and the vast scenery surrounding them. The East Kootenays touched the hearts of all our visitors and expect most to return in the very near future.

Another memorable moment for all the participants came at the closing awards dinner. The Ktunaxa Nation Dancers came and performed prior to dinner. One special dance which got all participants involved was the 'circle dance' or the 'circle of friendship' dance. Everyone participated and enjoyed and respected the great, talented and traditional dance and dress of the Ktunaxa Nation.

In blind golf all players rely heavily on their coaches on and off the golf course. Without the coaches, they could not play.  Also, with any of these events, they could not happen without sponsorship support or the help of many volunteers.

This can also be said for Free Spirit Travel owner Vicki Syfchuk. Vicki and all her family stepped up to sponsor our championship events and take care of our transportation needs for the entire week in the East Kootenays. Not only did they provide transportation, but they also helped with other volunteer needs including delivering pizza to some of our guests. They went above and beyond and this was recognized and appreciated by all participants.

As mentioned, without sponsorship support these events would not be possible. Therefore, the following sponsors need to be recognized for their generous support and commitment to blind golf.

Event Chairman and host, Darren Douma although exhausted from this huge undertaking was extremely happy with the outcome, saying, “We hosted these blind golf championships in the Kootenays over a ten-day stretch. All were successful and it was memorable for all involved. Everyone loved the golf courses and all the excellent service they received from the staff. All our visitors loved the vast amount of great scenery we have in the Kootenays and surrounding these golf courses. This was one of my priorities in hosting.”

The other priority I had was to bring awareness to the Kootenays about the existence of blind golf. Our motto at Blind Golf Canada is, 'WE CAN STILL PLAY'. Many people still hear that the blind and partially sighted can play golf and cannot believe it. Blind Golf Canada continues to try and expose and bring awareness to Canadians that you can golf, and we want new members from across Canada to join and come out swinging."

This can be said for any sport. Anyone coping with vision loss can participate in any sport, whether on a recreational or competitive level. You just need to believe in yourself and look at your ability, not your disability.

We certainly want to grow the awareness and participation in blind golf, so we encourage anyone interested to visit: www.blindgolf.ca to find out more.

We also encourage anyone looking into other sports to also to visit www.bcblindsports.bc.ca

Our events were also proudly sponsored by our National Blind Associations, CNIB and CCB. Another priority during these events was to showcase these organizations because they are important and valuable to those dealing with vision loss and blindness across Canada. These blind organizations make living in a world of vision loss possible and productive. CCB is a member-based organization and Blind Golf Canada is a proud Chapter within CCB National.

Both CCB and CNIB are also focused on the growth and participation in sports and recreation by those dealing with vision loss, so we encourage all Canadians to reach out to them to find out more about their valuable services.