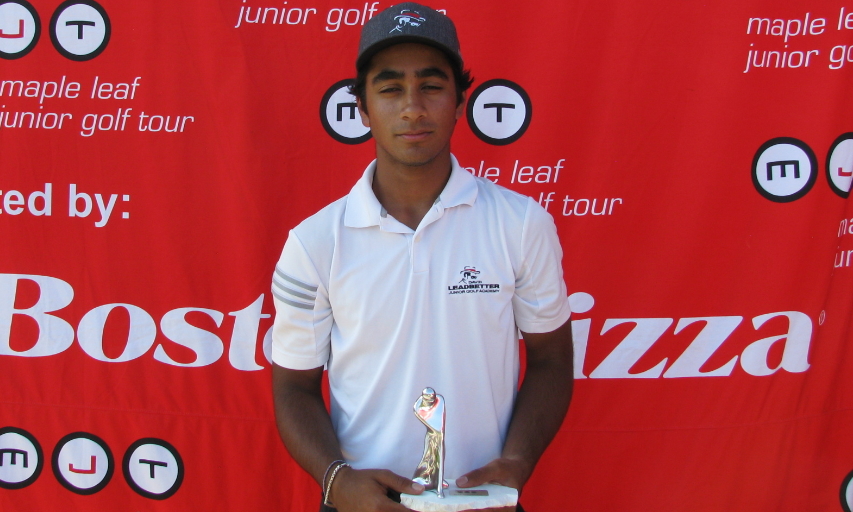 BRAGG CREEK, Alberta — Competitive junior golfers assembled in the town of Bragg Creek, AB, August 6 and 7, to compete for titles in seven divisions in the Maple Leaf Junior Golf Tour’s MJT Alberta Series presented by the Professional Institute of Massage Therapy at Wintergreen Golf Club. This tournament, which was also the final opportunity for players to qualify for Team West in the MJT National Team Challenge presented by Freedom 55 Financial in Niagara Falls, ON, next month, endured all types of weather conditions over 36 holes of play.

Calgary’s Nico Aulicino, 15, carded rounds of 71 and 72 (143) to win the MJT Juvenile Boys division and claim the Low Overall Boys score for the tournament, and be the only player in the field to finish the event under par. Aulicino, who earned his first MJT win of 2019 at Wintergreen Golf Club, made six birdies for the tournament. He did well to hold on to his lead after a late charge from second place finisher, Alex Nekich, 16, of Lethbridge, AB (72, 74 - 146). Nekich made three birdies in his final eight holes of the tournament and finished his last nine holes at two under par.

A spectacular finish took place in the MJT Junior Boys division where two extra holes were needed to crown a winner. Eighteen-year-old Shiv Kaura, of Davenport, FL, and 17-year-old, Sam Bratvold, of Medicine Hat, AB, were tied with scores of 75 and 77 (152) after continuously trading the lead throughout the tournament. With both players making birdie on the first playoff hole, another birdie by Kaura on the second playoff hole earned him his first Hoselton trophy in his three-year MJT career. “I’ve been playing MJT tournaments for a couple of years now and to finally get the win is very special,” commented Kaura, whose second day of play included two eagles and four birdies. Finishing in a tie for third place were Calgary, AB players Nolan Collins (83, 74 - 157), 18, and Matthew Betker (81, 76 - 157), 18.

Five-year MJT veteran, Bradin Stahl, 14, of Priddis, AB, fired scores of 78 and 70 to win the MJT Bantam Boys division by three shots. The Bantam Champion was busy during his round making a tournament-high 10 birdies over the two days, four of which came on his final eight holes. “I feel great winning my division,” commented Stahl. “It also feels great to make all those birdies and finish under par on the second day.” Stahl walked away from the tournament with his fifth career MJT Hoselton trophy. Rounding the division in a tie for second place were Calgary residents, Aneesh Kaura, 14, and Christian Waldron, 14, who both recorded scores of 78 and 73 (151).

12-year-old Ryan Badger, of Edmonton, AB, carded two consistent rounds of 77 for a total of 154 to win the MJT Peewee Boys division by six shots. “I had a tough first few holes on day two,” said Badger. “The highlight of the tournament was coming back on the back nine.” card. Charlie Gillespie, 12, of Calgary, finished with scores of 83 and 77 (160) to place second.

Georgia MacKenzie, 16, of Calgary, took the Hoselton trophy in the MJT Girls 15-18 Girls and the Low Overall Girls score with rounds of 92 and 86 (178), saying, “The highlight of the tournament for me was bouncing back. Whenever I had a bad hole, I stayed calm and came back better on the next one.” Zoe Banack, 15, of Yellowhead County, AB, finished in second with scores of 100 and 93 (193).

Capturing the MJT Girls U15 division title was 13-year-old, Jade Carter. The Calgary resident recorded rounds of 92 and 87 (179) to earn her first win on the Junior Tour since graduating from the MJT’s Mini Tour at the beginning of this year. “After playing my practice round, I felt confident going into this tournament,” said Carter. “It feels really good to win for the first time on the junior tour and I hope it’s just the beginning of many!” Runner-up was Tessa Ion, 12, of Calgary, AB, who shot 98, 108.

A two-man battle took place in the MJT Collegiate division between 19-year-old, Jake Willsey, of Grand Prairie, AB, (89, 85 - 174) and 20-year-old, Michael Dumont, of Airdrie, AB (80, 98 - 178). After Dumont took a commanding nine-shot lead after the first round, Willsey came back to win by four shots and take the Hoselton trophy.

For PLYR Long Drive, PLYR Closest-to-the-Pin and the MJT Booster Juice Comeback Award winners, please visit the highlights page for the tournament here. Players representing Team West at the MJT National Team Challenge will be announced once qualifiers have wrapped up.

The Junior Tour makes its next stop in Alberta at River Spirit Golf and Country Club in Calgary on August 19 and 20. For more information or to register, please visit www.maplejt.com or call 1-877-859-4653.

About the Professional Institute of Massage Therapy
The PIMT has been providing quality massage therapy education in Alberta and Saskatchewan since 1992.  Our two-year, 2,200 Hour Advanced Massage Therapy programs in Calgary and Saskatoon provide the student with everything they need to have a long and fulfilling career.  If you are interested in a medically based, therapeutically oriented career then perhaps massage therapy is for you. To find out more about Professional Institute of Massage Therapy, please go to www.pimtmassage.com.