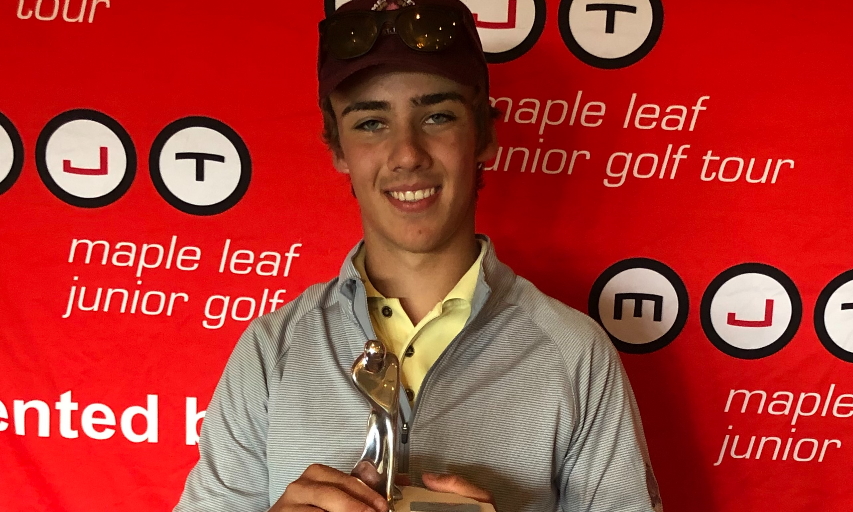 COPETOWN, Ontario — The Boston Pizza-presented Maple Leaf Junior Golf Tour held its first of three August events on the Ontario circuit in Copetown, where a talented field of junior golfers from across the province competed for titles in six divisions in the MJT Ontario Series at Copetown Woods Golf Club. With limited opportunities remaining, this tournament offered players a chance to earn a spot at the MJT Boston Pizza National Championship presented by TaylorMade and adidas golf at The Reunion Resort in Florida this November.

The Low Overall Boys score of the tournament went to 18-year-old, Kevin Frehner in the MJT Junior Boys division. The London, ON, product made four birdies and an eagle in his second round and finished with a three-under par back nine to improve his second day score by eight shots over his first day score (78, 70=148). Coming in second place was Milton, ON’s Isaac Brown, 17, who carded rounds of 83 and 79 (162).

The Low Overall Girls score went to three-time 2019 MJT champion, Alessandra Christine Nagayo, of Toronto, ON. The 15-year-old player, who has been a force since joining the tour earlier this year, posted a pair of 77s (154) to take the MJT Girls 15-18 division by three shots. Runner-up behind Nagayo was Mississauga, ON native, Bo Brown, 15, who shot scores of 78 and 79 (157).

It was a tight race in the MJT Juvenile Boys division between Sudbury, ON’s Benjamin Fowke, 15, and Oakville, ON’s Charlie Francuz, 16. Francuz (77, 79=156) took the round one lead by two shots, but it was Fowke (79, 76=155) who got off to a strong start in round two and held on for the one-shot victory. Fowke, playing in his first MJT event as a Juvenile, took home the first Hoselton Trophy of his career.

Jameson Staab, 12, of Kitchener, ON, took home the MJT Peewee Boys division title with scores of 85 and 80 (165). Staab, who has been playing on the MJT Mini Tour for the last three years, grabs his first Junior Tour win. Aiden Pavey, 12, of Burlington, ON, rounded the division in second place with scores of 88 and 80 (168).

Taking a convincing win in the MJT Girls U15 division with a nine-shot improvement in round two over round one (85, 76=161), was Burlington’s Emma Hansen. The 13-year-old golfer who won once on the Mini Tour last year, earned her first MJT Junior Tour win at Copetown Woods Golf Club. Finishing in second place was Maple, ON player, Shauna Liu, 10, who scored 100 and 85 (185).

For PLYR Long Drive, PLYR Closest-to-the-Pin and the MJT Booster Juice Comeback Award winners, please visit the highlights page for the tournamenthere. The exemptions into the MJT Boston Pizza National Championship will be announced shortly.

The next two Maple Leaf Junior Golf Tour stops in Ontario are at St. Andrew’s Valley Golf Club in Aurora on August 17 and 18, and at Grey Silo Golf Club in Waterloo on August 24 and 25. For more information or to register, please visit www.maplejt.com or call 1-877-859-4653.