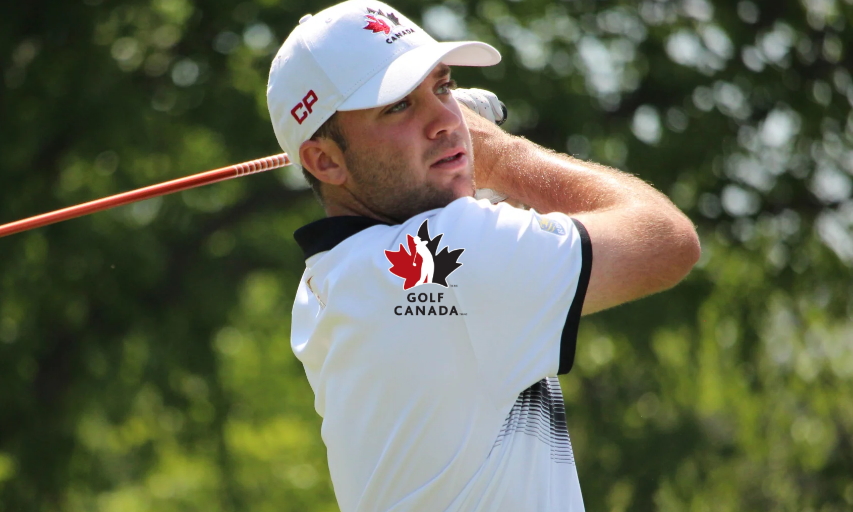 “It has been pretty interesting,” he says. “It's a completely different culture over there. Obviously, there is a big language barrier and just doing the simple things that we would take for granted here can be challenging.”

Like checking into a hotel. “It might take five minutes here, over there it can be 30 minutes,” Macdonald says. And then there's the food. Macdonald is a meat-and-potatoes kind of guy and hasn’t experimented with some of the more exotic food he has seen on display in China.

“The buffets will have stuff like duck feet or cow tongues, but I have tried to stay away from that stuff,” he says with a laugh. “A lot of the hotels we stay at have American menus so you can get a clubhouse or a burger. You will usually end up having six to eight burgers a week, so I have gained a few pounds since I've been there.”

Travel between events can be tricky and Macdonald has leaned on some of the American and other Canadian players who have been there longer than him for advice. “Having all those guys who have done it for a couple of years out there makes the travel a lot easier,” he says. “You have to know how to get around on the trains and everything. I am getting a little more used to it every time I go back.”

Things on the course have gone well. Macdonald is coming off his best finish of the year — a tie for seventh — at the Dongguan Open at the Mission Hills Resort. That finish moved him up to 31st on the Order of Merit.

Macdonald says the style of golf in China is a little different and the courses put pressure on your tee game. “They are a lot different from what we are used to, for sure,” he says. “They are all kind of carved out of jungle or thick treed areas. Holes don’t run side by side, so if you miss a fairway you are reloading because you are not going to find the ball. And if you do look for it, you have to deal with snakes, too.

“So the tee ball game is pretty important over there because almost on every tee shot you could easily make six or worse. It is not too hard to hit a foul ball and have to re-tee.”

The weather has been another challenge in China. “It has been extremely hot,” Macdonald says. “Two weeks ago was the hottest I have played golf in. I think we had a heat index of 121 on one of the days and at that point you are not really playing golf, you are just trying to advance the ball and see what you can do from there. “I think we have had four tournaments that have been shortened and the last two tournaments we played were cut to two rounds because of heavy rain and lightning.”

Macdonald is still early in his pro career. The 24-year-old Point Grey Golf & Country Club member played four years of collegiate golf at Purdue University in Indiana. He graduated with a management degree in late 2016 and turned pro the following spring. He is also a member of Golf Canada’s Young Pro Squad.

Macdonald made good use of a sponsor’s exemption and tied for 18th at the Mackenzie Tour’s ATB Financial Classic in Calgary on Sunday. That top-20 finish earned him a spot in this week’s Players Championship in Winnipeg.

After that he will play in the Vancouver Golf Tour’s Vancouver Open later this month before returning to China for the final four events of the 2019 season. His immediate goal is to move inside the top 25 on the PGA Tour China Order of Merit after the next two events, which would get him a pass to the second stage of the Korn Ferry Tour qualifying school.

Macdonald played on that tour, then called the Web.com Tour, in 2018, but had limited success. He’d love another crack at it and thinks his game is in a better place. “I like the way I am trending,” he said. “Hopefully, I will have one nice week or a couple nice weeks over there and get into the top 25 or maybe a second or a win and maybe get into the top 10. We’ll see what happens.”

Macdonald has made the equivalent of about $29,000 Cdn in 10 events in China this year. Two other British Columbians are regulars on the PGA Tour China circuit. Justin Shin of Maple Ridge is currently 75th on the money list, while Eugene Wong of North Vancouver is 114th.