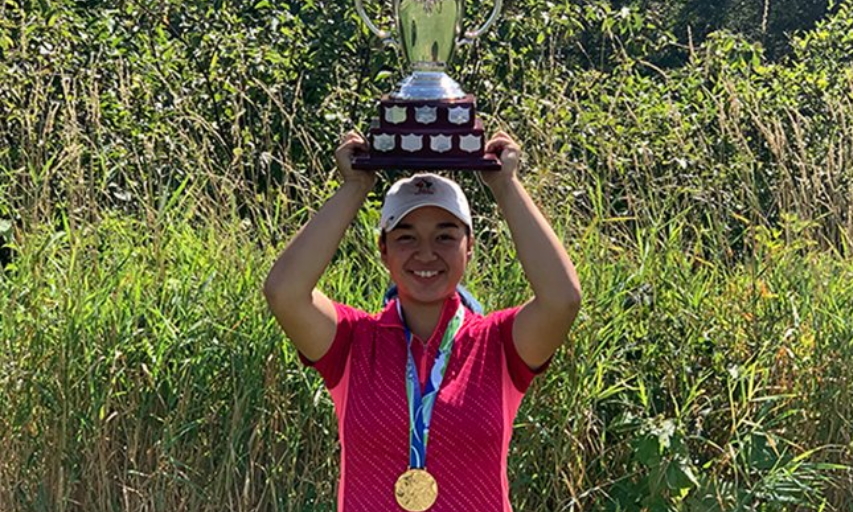 PEMBERTON, British Columbia — Alyssa Chang has decided she’ll keep the blue hair for a little while longer. After all, it seems to be a good luck charm of sorts.

The 16-year-old from Surrey got the biggest win of her young golfing life Thursday when she captured the B.C. Juvenile Girls Championship at The Meadows at Pemberton. Afterwards, she gave partial credit to her blue hair, which she has been thinking about dying back to its original colour.

“My parents are not super strict but my mom said she didn’t want me dying my hair until I was 16,” Chang said with a laugh after her round. “So when we got to my 16th birthday I’m like, I kind of want to do something crazy this year and come out of my shell, so I dyed it blue.

"The craziest thing I have ever done. I feel like this year it has been kind of like a good luck charm . . .so I think I am going to keep the blue hair for a while.”

Chang, who is about to enter Grade 11 at Fraser Heights Secondary in Surrey, shot an even-par 72 in Thursday’s final round to finish the 54-hole event at one-over par. That was good for a three-shot win over Martina Yu of Coquitlam.

Chang went wire to wire for the victory and was proud of overcoming some big-time nerves as she played with the lead. “I have never been in the lead for three days in a row so I was really trying to stay calm,” she said. “Golf is such a mental sport and I knew after the first two rounds I had played well, so I just told myself last night that the main thing was stay calm and not let my nerves get to me.

“We were staying about a half-hour away in Whistler and the entire car ride here I was listening to music and just taking deep breaths and telling myself to stay calm and do my best today.” She did just that, recording six birdies in her final round and never relinquishing her lead.

The only real mistake Chang made Thursday was thinking she had shot a career round when she finished her round off with a birdie on the 18th green. “I mis-calculated my score at first and thought that putt was for one-under and I have never shot under par before,” she said. “So my heart was beating and I was like, 'Alyssa you can career and win'. I sank the putt and I was looking over the score and realized I had tallied it wrong. I was even.”

Yu did close to within a shot after 13 holes, but three straight bogeys on the 15th, 16th and 17th holes ended her chances of catching Chang. Yu also shot an even-par 72 on Thursday. Sherri Yang of Richmond finished third at eight-over par. Yang closed with a two-over 74.

Chang credited her parents, who were both there to watch her win, with helping her stay relatively calm. “My dad told me as long as you play a good round, win or no win, we are going to throw a party,” she said. “He was already really, really excited to begin with. My mom is probably going to start crying, she is very emotional.”

The Juvenile Championship is open to players 16 and younger. Chang finished third at the event last year. She was eighth at last month’s B.C. Junior Girls Championship at Fairwinds Golf Course in Nanoose Bay.

Chang credited her short game with helping seal her win. “My short game was definitely good this week,” she said. “I actually got a new putter last week. I just had a lot of putts that just dropped. I had a few par saves. Nothing that crazy, though. It was just a boring round. 'Boring golf', as my dad calls it.”