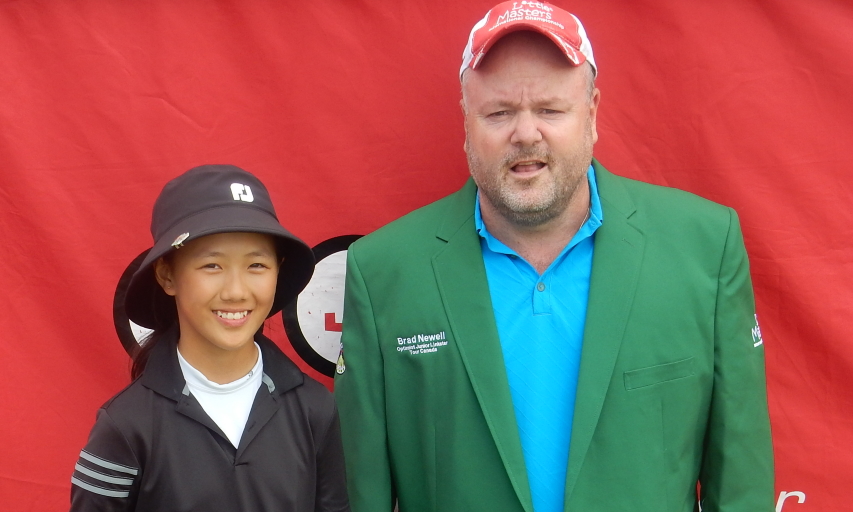 DELTA, British Columbia — The late Harry White, a champion of junior golf development and mentor to countless young players, founded the Little Masters golf tournament in British Columbia in 1966, and the Boston Pizza-presented Maple Leaf Junior Golf Tour was proud to continue his legacy by hosting the 53rd event at Kings Links by the Sea in Delta, BC, August 12 and 13.

The MJT Harry White Little Masters featured 36 holes of golf, magnificent prizing, phenomenal scoring and great camaraderie among the competitors aged 12 and under, who battled for special trophies in six age divisions .

Excitement rose in the MJT Girls 11-12 division where a playoff was needed to decide a winner between Jingwen (Anna) Dai, 11, of Surrey, BC, and Anna Huang, 10, of Vancouver, BC. With Dai (72, 74=146) taking a three-shot lead after the first round, Huang (75, 71=146) charged back with a two-under second day score that included six birdies. Playing the 18th hole at Kings Links for a playoff, a great approach shot into the green by Dai secured a par and the victory. Richmond, BC’s Cadence Ko, 12, also made a spectacular run on the second day shooting two-under. Ko finished the division in third place just one shot behind the playoff with scores of 76 and 71 (147).

An incredible comeback by Jaden August, of Pitt Meadows, BC, took place in the MJT Boys 9-10 division, where the 10-year-old star fired a pair of 71s (142) for the tournament, but finished his second round with an eagle and two birdies in the final four holes to win by one shot. “It feels amazing to win,” he commented after his incredible finish. “I like playing in the MJT events because they are so competitive.” Runner-up, coming off the biggest win of his young career at the US Kids World Championship in Pinehurst, NC, was 10-year-old, Alex Zhang, of Richmond, who shot 72 and 71 (143).

Eight-year-old Tiger Zhao brought home the MJT Boys 8U trophy with scores of 70 and 73 (143) from a modified 3,000-yard tee at Kings Links. The Vancouver player completed the tournament with eight birdies total and played three of his four nine holes under par. Attributing his win to his work on the greens, Zhao commented, “I had a lot of good putts which allowed me to make lots of birdies and pars.” Runner-up was eight-year-old, Matthew Cui, of Burnaby who went 73 and 74 (147) over the two days.

A fantastic display of golf took place in the MJT Boys 11-12 division where Soohan Park, of Langley, BC, won the division by two shots with scores of 73 and 75 (148). The 11-year-old competitor made a total of seven birdies for the tournament with three of them coming in the span of five holes during the second round. Knowing that good putting is the key to a successful round, Park said, “The highlight of the tournament was my putting. I worked really hard on it and I made a lot of great putts during the tournament.” Park picked up his first career MJT Mini Tour victory with his performance at the Little Masters. Roy Baek, 12, of Coquitlam, BC, fired scores of 76 and 74 (150) to grab hold of second place in the division.

The MJT Girls 9-10 title was captured by eight-year-old, Kathleen Dunn, of Surrey, who played up a division. Dunn played a consistent tournament shooting a pair of 82s (164). “I was really happy with my finish,” she said, after completing her second round with back-to-back birdies. “It takes a lot of hard work and it feels awesome to win.” Richmond’s Joyce He, 10, came second with scores of 90 and 84 (174).

Full results including PLYR Closest-to-the-Pin and PLYR Long Drive competition winners are posted on the MJT website here. The next 12U event in BC will be the MJT Mini Tour National Championship presented by Ford Canada at Tsawwassen Springs in Tsawwassen on August 22 and 23. For more information or to register, please visit www.maplejt.com.