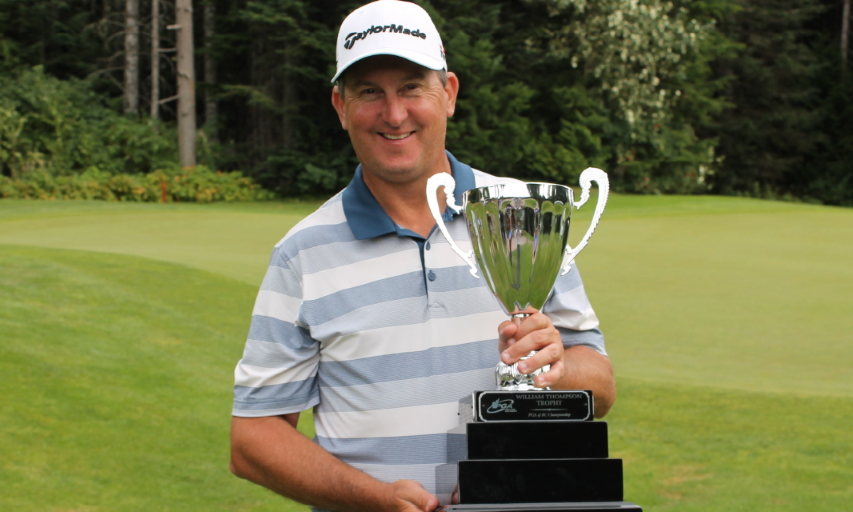 Parry, who held a two-stroke lead over the field after a 2-under-par 69 in Monday’s first round, carded a tournament-low 66 on Tuesday to finish at 7-under and win the event by six shots. Defending champion Kevin Stinson (Cheam Mountain Golf Course) and 2011 winner Lindsay Bernakevitch (Victoria Golf Club) shared second place at 1-under.

“I just think there’s something about coming to play golf in Whistler, and particularly for me at the Whistler Golf Club. I’ve had a lot of success here over the years,” said Parry, who was runner-up in 2010 when the event was last hosted by the Arnold Palmer-designed course. “This place is amazing. I love it.”

By winning the tournament for a fourth time, Parry tied Scott Minni for the most PGA of BC Championship victories in the Association’s modern era. Parry’s other titles came in 2000, 2008 and 2015.

“That’s incredible,” Parry said of sharing the all-time mark with Minni. “Scott – he was so good. When I was a new guy out here playing and we’d get paired together every once in a while and you’d watch the way he’d hit it and the way he played. It was just perfect.

“To think all these years later that my record is starting to match his is pretty cool. I’m pretty proud of that.”

In addition to having his name etched on the William Thompson Trophy once more, the Seymour Creek Golf Centre Teaching Professional took home $6,300, plus a championship ring courtesy of title sponsors TaylorMade and adidas Golf.

Parry had five players sitting just two shots back of his lead to start the day, but he quickly distanced himself from the 99-player field with birdies on each of his first three holes. He’d finish with seven birdies and two bogeys on his card overall, at one point leading by as many as eight strokes.

“You never know in golf if it’s going to go your way or not,” said the 47-year-old. “So to hole a couple of putts early and get that extra little dose of confidence that things might work out was a nice way to start the round.

“I’ve played some of these events and fought from behind or fought with the guys the whole way. To be out in front – that was fun. I enjoyed that.”

Bernakevitch was the only player to mount much of a challenge Tuesday, making three early birdies to rise up the leaderboard, but his impressive round of 68 wasn’t quite enough to keep pace.

“The greens are pure and the course is in unbelievable shape, so the scores are out there if you’re hitting it great and putting well, and obviously Bryn’s proving that yet again,” said Bernakevitch, the reigning PGA of BC Club Professional Champion.

“If I was being honest, I didn’t expect to play well. I haven’t played a tournament since June and hadn’t really played golf for three-and-a-half weeks, so I was coming in pretty raw and found a little bit of a swing thought or feeling in the practice round and made a bunch of putts.”

Stinson continued his excellent play in PGA of BC championship events, as he still has yet to finish outside the top five in any of his six tournament starts. He and Bernakevitch each pocketed $3,725 for their finishes this week.

“This course was a really good test. It was firm, it was fast. It was everything you would want for our major championship of the year, so it was awesome,” said Stinson, who made two late birdies to get into the second-place tie. “On the back nine I gave myself a little pep talk trying to bring it home and made a couple coming in, which was nice.”

About TaylorMade Golf
Headquartered in Carlsbad, California, TaylorMade Golf is a leading manufacturer of high performance golf equipment with industry-leading innovative products like M5/M6 metalwoods, M5/M6 irons and TP5/TP5X golf balls, along with the newly launched P790 irons and Milled Grind 2 wedges. TaylorMade is the #1 Driver in Golf and also a major force on the PGA TOUR with one of the strongest athlete portfolios in golf, that includes Dustin Johnson, Rory McIlroy, Jason Day, Jon Rahm, Rickie Fowler and Tiger Woods. Learn more at www.taylormadegolf.ca

About adidas Golf
For over 80 years, adidas has been part of the world of sports on every level, delivering state of-the-art sports footwear, apparel and accessories. Today, adidas is a global leader in the sporting goods industry and offers a broad portfolio of products. Our strategy is simple: continuously strengthen our brands and products to improve our competitive position and financial performance. adidas golf partners with the top tour athletes who continue to win, including World No. 2 player Dustin Johnson, No. 5 Jon Rahm and No. 11 Xander Schauffele along with a young guns squad lead by recent winner of the Barracuda Championship Collin Morikawa . The company's products resonate with consumers thanks to industry-leading performance from TOUR360 footwear, the Ultimate bottoms franchise, and our Women's rangewear category. adidas Golf has a fully dedicated team that supports the Canadian marketplace with industry-leading products and service. Visit www.adidas.ca/golf.