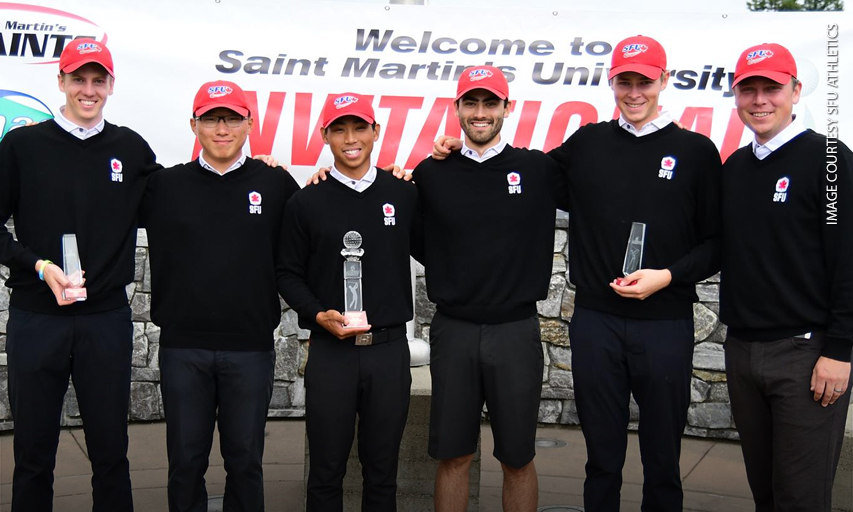 DUPONT, Washington — With three golfers in the top 10, and a near-record round on day 1, Simon Fraser University captured the Saint Martin's Invitational by 16 strokes on Friday and Saturday at The Home Course in Dupont, WA.

First round leader Simon Fraser (286-270-277) led the field by 16 strokes after 36 holes, and held that margin the rest of the way to capture the team title.

With a final round 277, SFU won by 16 strokes over Dixie State. SFU was on fire in the second round shooting a team score of 270 on the par 72, 6,983-yard layout, the second-lowest team round in GNAC history.

SFU won the tournament with a team score of 833. In second place was Dixie State (849) and in third was Western Washington (856).

SFU placed three golfers inside the top 10 with first day leader Ryan Stolys shooting a final round 70 to finish at 10-under-par 206. He opened with a 70 and 66 to share the first day lead with UBC's Ethan de Graaf, who won medalist honours with three rounds of 68 for a 12-under-par 204.

"It's hard to put into context how incredibly well the guys played. Shooting (-31) as a team score is absolutely amazing," said SFU head coach Matt Steinbach. "It's fun as a coach to watch all five guys going low and making a ton of birdies. This is something we will continue to build upon for the next event."