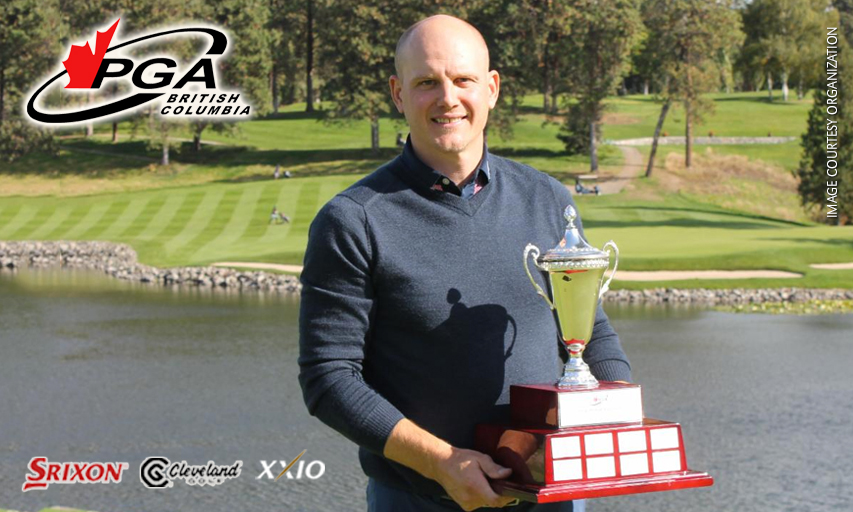 Playing in his first Club Professional Championship, the first-year head professional began Tuesday’s second round two shots back of overnight leader Philip Jonas (Philip Jonas Golf Academy) but battled the elements and a sold-out field of 47 other players to finish the tournament at seven-under-par to cap-off a one-shot victory and capture the Dick Munn Memorial trophy.

Kitts, who played the two-round tournament without any bogeys, shot rounds of 68 and 69 to claim the $2,700 first place cheque from the $15,000 Championship purse.

“The key to my tournament was not making any bogeys through these two days,” said the Kelowna golf professional.

“I started off with a birdie on the first and thought this was going to be an easy day but then had to wait 15 holes to make my second” he added after speaking on the importance of patience through tough conditions.

“I saw the leaderboard on the 16th tee and saw it was going to be close coming down the stretch. Then I saw Brad (Clapp) drop a couple shots on 16 and 17 and knew that I had a chance with a birdie at the last” he adds.

Sitting green-side in two on the par 5 18th, he hit a great pitch from the thick rough to a couple of feet and knocked it in for the Championship victory.

Kitts has been on somewhat of a hot streak, having collected a top-five finish at the 2019 PGA of BC Championship just last month at Whistler Golf Club where he earned himself a spot to represent the BC Zone at the upcoming PGA Head Professional Championship of Canada in early December at Arizona’s Wigwam Golf Resort.

The championship comes timely as he and wife Andrea are expecting their second child in early October.

A late back-nine charge of three birdies in the closing five was one-shot short for 2016 Champion and head professional at Point Grey Golf & Country Club, Dave Zibrik. Zibrik shoots rounds of 68 and 70 to earn $2,000 for his efforts.

Clapp (Cultus Lake Golf Club) and Jonas each finished at 5-under par, two shots back to round out the top 3 and each earn $1,275.