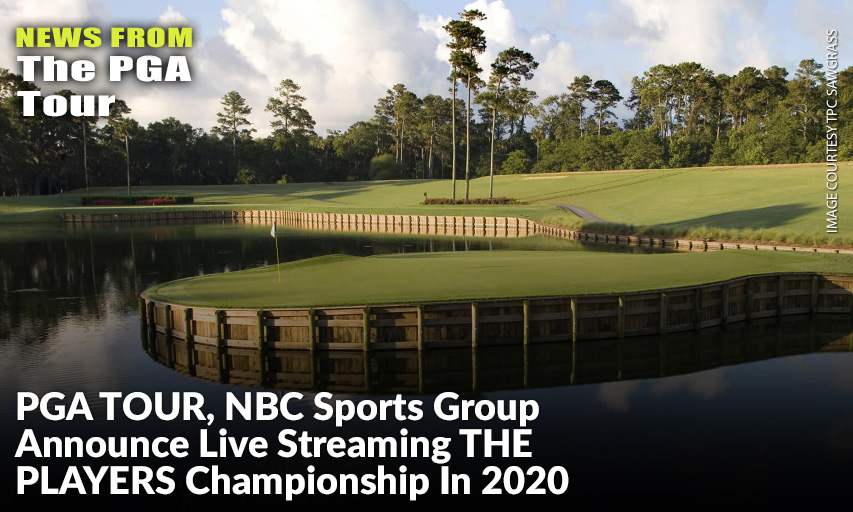 For the first time ever in golf, every shot by every player will be live-streamed from a full-field tournament when THE PLAYERS Championship returns to TPC Sawgrass, March 12-15, 2020, allowing fans to follow any player in the elite field, all four rounds. All of this revolutionary coverage will be available to PGA TOUR LIVE subscribers on either NBC Sports Gold or Amazon Prime Video Channels.

“The PGA TOUR is the most content-rich sport on the planet and we have been focused on expanding the amount of content we bring to our fans from our competitions,” said Rick Anderson, Chief Media Officer for the TOUR.  “Our vision is to bring every shot in every PGA TOUR golf tournament live and on-demand to our fans, and this is the first step to making that happen.”

PGA TOUR Entertainment and NBC Sports Group will accomplish the monumental task of showcasing more than 32,000 shots over 72 holes from a starting field of 144 — live — by utilizing nearly 120 cameras positioned throughout THE PLAYERS Stadium Course, with each group having its own dedicated stream.

“Every shot of THE PLAYERS on PGA TOUR LIVE is a natural next step in the innovative partnership between NBC Sports and the PGA TOUR that spans nearly 60 years,” said Mike McCarley, president, GOLF, NBC Sports Group. “Super-serving golf fans with more comprehensive coverage of THE PLAYERS is emblematic of our commitment to elevating this championship and builds upon our success in adding enhancements to PGA TOUR LIVE on NBC Sports Gold.”

The PGA TOUR, headquartered in Ponte Vedra Beach, Florida, co-sanctions more than 130 tournaments on the PGA TOUR, PGA TOUR Champions, Korn Ferry Tour, PGA TOUR Latinoamérica, Mackenzie Tour-PGA TOUR Canada and PGA TOUR Series-China. Members on the PGA TOUR represent the world’s best players, hailing from 29 countries (93 members are from outside the United States). Worldwide, PGA TOUR tournaments are broadcast to 226 countries and territories in 23 languages. Virtually all tournaments are organized as non-profit organizations to maximize charitable giving. In 2018, tournaments across all Tours generated a record $190 million for local and national charitable organizations, bringing the all-time total to $2.84 billion.