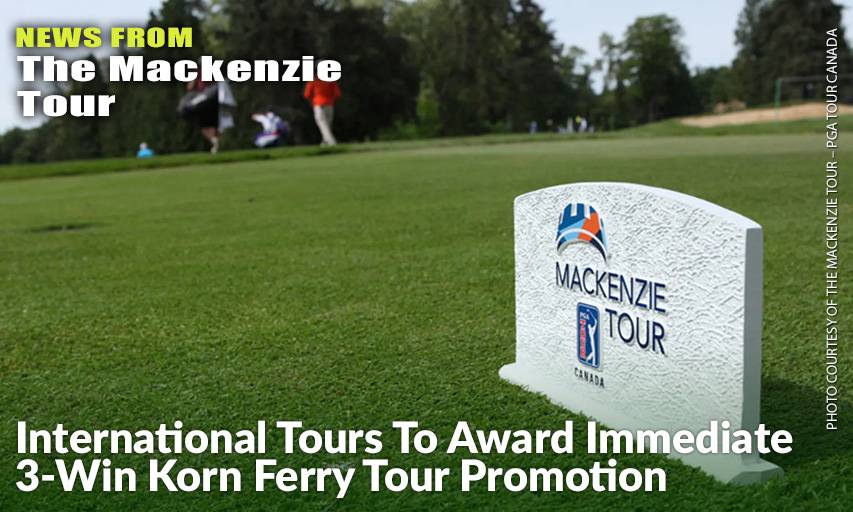 The PGA TOUR announced October 15 that beginning with the 2020 seasons, its three International Tours — PGA TOUR Latinoamérica, Mackenzie Tour – PGA TOUR Canada, and PGA TOUR Series-China — will reward an immediate promotion and membership on the Korn Ferry Tour to any player who wins three tournaments on one Tour in a season.

This follows the long-time tradition established by the Korn Ferry Tour, which began the original three-win promotion in 1997 that sends three-time winners in a season directly to the PGA TOUR. Since the inception, 12 players have won three Korn Ferry Tour tournaments in a season and made the jump.

“This is one more incentive for the players who play high-level golf on our three Tours in Latin America, Canada and China. Players have shown that they are ready to compete and contend once they get to the Korn Ferry Tour. Giving them an immediate track to that Tour is an exciting addition we’re pleased to announce,” said Rob Ohno, PGA TOUR Senior Vice President, International Tours.

PGA TOUR Latinoamérica began in 2012, with the Mackenzie Tour following a year later and PGA TOUR Series-China starting in 2014. Since then, eight different players have won at least three times in a year—with China’s Zecheng “Marty” Dou still the only International Tour player to capture four titles in a season, something he did in 2016 on PGA TOUR Series-China.

“The talent level on these Tours is so high that these players can get hot and win in bunches, and we look forward to when that happens,” Ohno continued. “The Tours provide a pathway to the PGA TOUR, and the players’ next stop is the Korn Ferry Tour. If a player plays well and wins three times, we want to send him on his way right then.”

China’s Haotong Li was the first player to accomplish a three-win season, in 2014. Since then, New Zealanders Josh Geary and Nick Voke won three tournaments on that Tour, with Dou winning four times.

In 2015, Mexico’s Rodolfo Cazaubon became the first PGA TOUR Latinoamérica player to win three tournaments in a season. Current PGA TOUR player Nate Lashley followed Cazaubon, in 2016. Dan McCarthy was the first Mackenzie Tour player to accomplish the feat, with Tyler McCumber the most recent, in 2018.