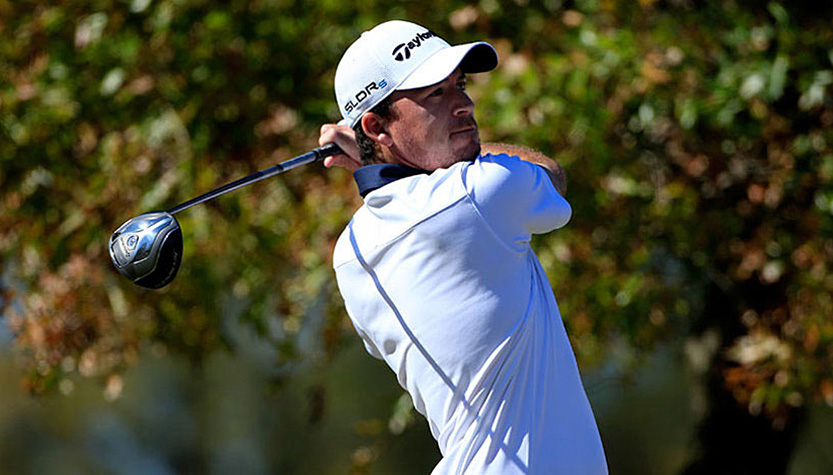 Taylor got more good news after the tournament, when he drew into this week’s limited-field event, the CJ Cup @ Nine Bridges, in South Korea. Taylor had been listed as the second alternate.
Fellow Abbotsford native Adam Hadwin will also play in South Korea. Hadwin opened his 2018 season by finishing tied for 51st at the CIMB Classic.

ON TO SPAIN: Langley’s James Allenby, who used a clutch final round to survive the first stage of the European Tour’s qualifying school in Italy, is now preparing for the second stage in Spain.
Second stage qualifying goes Nov. 3-6 at four different sites in Spain. The Q-school finals go Nov. 11-16 in Tarragona, Spain.

Allenby, who dominated the Vancouver Golf Tour this year, fired a six-under 66 in the final round of his first-stage qualifier in Bogogno, Italy earlier this month to finish tied for 12th place. The top 21 and ties advanced to second stage.

B.C. FOURSOME: The Web.com Tour Q-school is also moving to its second stage, which will be held at five sites either Oct. 31-Nov. 3 or Nov. 7-10. Four British Columbians -- Jared du Toit of Kimberley, Seann Harlingten of West Vancouver, Stuart Macdonald of Vancouver and Riley Wheeldon of Comox -- have all advanced to second stage.

Players will find out what second stage site they are competing at later this week. The Q-school finals go Dec. 7-10 at Whirlwind Golf Club in Chandler, Ariz.

CORDOVA CHAMPS: The team from Cordova Bay Golf Course in Victoria won the RBC Scramble at Cabot Links and Cabot Cliffs in Nova Scotia. The Cordova Bay team of professional Nate Ollis and amateurs Rodney Webber, Phil Kondrak, Eric Smith and Eric Watson prevailed in the 54-hole competition when Webber sunk a four-foot putt for par on the final hole.

“I’m no professional golfer but standing over that putt I definitely felt like one,” Webber said. “That was definitely the most pressure-packed putt I’ve ever had in my life.”

The RBC Scramble saw thousands of teams from across Canada participate in a series of local and regional qualifying events. Twenty-two teams advanced to the national finals. Cordova Bay finished at 46-under par, a mere 0.8 point better than the runner-up team of The Landings in Kingston, Ont.

CHANGING HANDS: Furry Creek Golf & Country, the scenic but confounding layout that straddles both sides of the Sea-to-Sky Highway just north of Britannia Beach, has been sold. The GolfBC Group has sold the course to China-based Fine Peace Holdings Limited.

The sale includes development land surrounding the golf course. Fine Peace took over the course on Oct. 10 and has assured present employees that they will retain their jobs.

THE ENVELOPE PLEASE: Adam Blair of Talking Rock Golf Course in Chase was named Golf Professional of the Year at the annual PGA of BC awards celebration at Richmond’s River Rock Casino Resort.

NOT DONE WINNING: She is heading to the British Columbia Golf Hall of Fame, but Holly Horwood isn’t done winning tournaments. Horwood, who will be welcomed into the Hall of Fame at ceremonies this week at Point Grey Golf & Country Club, just won the Pacific Northwest Golf Association’s Super Senior Women’s Championship in Medina, Wash.

Horwood shot the low round of the tournament, a one-under 72, in her final round at Overlake Golf & Country Club to beat fellow Vancouver resident Phyllis Laschuk by nine shots. Horwood will defend her title next year when the event is held at her home club, Shaughnessy Golf & Country Club. “I hope to see everyone there,” Horwood said. “It’s going to be wonderful.”

Others being inducted into the B.C. Golf Hall of Fame this week include Pat Fletcher, Colleen McCulloch, Brent Franklin and the 1979 Willingdon Cup team of Steve Berry, Rick Gibson, Kelly Murray and Doug Roxburgh, who were all members of Marine Drive Golf Club in Vancouver.

’BIRDS SOAR: Avril Li won the individual title and led the UBC Thunderbirds to the team title at the St. Martin’s Invitational in Lacey, Wash. Li, a junior from Port Moody, shot rounds of 69 and 83 to win the individual title by three shots over Emily Leung of Simon Fraser University. UBC captured the team title by 12 shots over SFU. The University of Victoria finished fifth in the eight-team field.

CRISOLOGO PREVAILS: SFU senior Chris Crisologo of Richmond closed with a four-under 67 to win the Concordia Invitational at Columbia Edgewater Country Club in Portland, Ore. Crisologo finished the 54-hole event at even par, three shots better than Isaac Hall of Concordia. UBC edged Concordia by one shot to win the team title. SFU finished third. UBC was led by freshman Charles-David Trepanier of Quebec City, who finished tied for fourth at five-over par.

OFF TO NATIONALS: Fresh off their wins at the PACWEST Championships, the University of the Fraser Valley’s men’s and women’s golf teams are competing at this week’s Canadian College Athletic Association national championships at Royal Ashburn Golf Club in Oshawa, Ont.