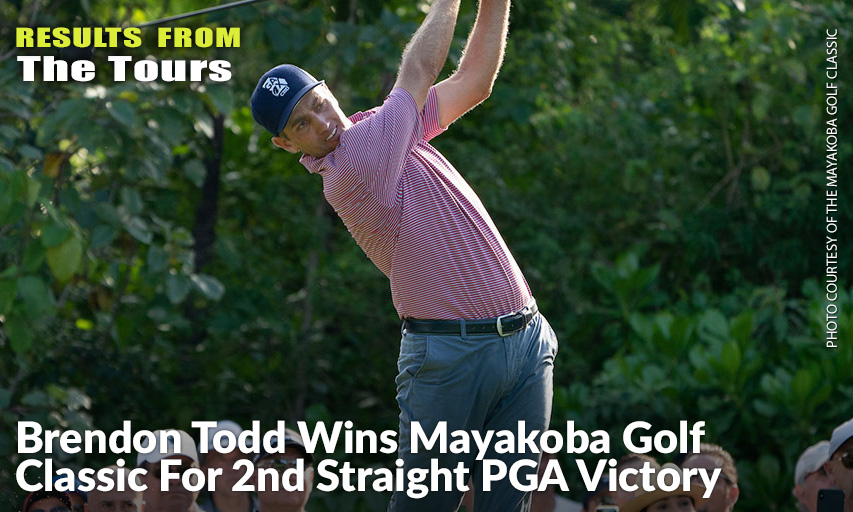 PLAYA DEL CARMEN, Mexico — Brendon Todd got up-and-down for par on the final hole to close with a 3-under 68 and win the Mayakoba Golf Classic, his second straight victory in a remarkable turnaround.

Todd was tied with Vaughn Taylor when they were among 12 players who had to return to El Camaleon to complete the rain-delayed tournament. Todd holed an 18-foot birdie putt on the 15th hole and looked to stretch his lead to two shots until he missed a 3-foot par putt on the 16th.

With no margin for error, he made par on the last two holes. Taylor had a 15-foot birdie putt on the 18th hole that stopped one turn short of falling.

Taylor shot 68 and tied for second with Carlos Ortiz and Adam Long.

The 34-year-old Todd could not have imagined this position a few years ago, when he had a case of the full yips and began thinking about another career. From February 2016 through the end of 2018, he played 35 times on the PGA Tour and missed the cut all but twice.

But he battled through it, got his game in reasonable shape last year, earned his card through the Korn Ferry Tour Finals and now is leading the FedEx Cup as the PGA Tour heads to its final event before a short winter break.

The victory also gets Todd into the Masters for the first time in five years. He has one event left at Sea Island next week, and then heads to Maui for the Sentry Tournament of Champions at Kapalua.

Ortiz was going after his first PGA Tour victory before a home crowd in Mexico, needing a birdie on the 18th hole, which yielded only four birdies to 164 players on the weekend. He did well to scramble for par, and then had to wait to see if it would get him into a playoff.

Todd found a good lie in the rough left of the fairway, and he hit that left of the green into another decent lie. He lofted a pitch to just over 3 feet and made the putt, finishing at 20-under 264.

Taylor saved par from about 5 feet on the 15th hole when he returned in the morning. He caught a bad break from a greenside bunker right of the 16th when his ball came to rest right in front of a ridge, leaving him no chance to put any spin on the ball. The best he could manage was 10 feet, and his par putt turned away.

Todd gave him life by missing his 3-footer to keep the margin at one. Taylor’s last chance was right in the heart of the cup, just an inch short.

“Warming up this morning the greens were a little slow,” said Taylor, trying to win for the first time since Pebble Beach in 2016. “I was a little nervous, so usually come up short when I’m nervous.”

Harris English was one shot behind when he returned and missed a 15-foot birdie putt on the 15th hole to match Todd. Then, his shot into the 16th was plugged so badly in the bunker that it took him two shots to get out, leading to a double bogey that ended his chance.

Ortiz had the best finish by a Mexican in the Mayakoba Classic since it began in 2007. Abraham Ancer tied for eighth, making it two Mexicans among the top 10. Ancer was one of six players in the field who are in the Presidents Cup in December.