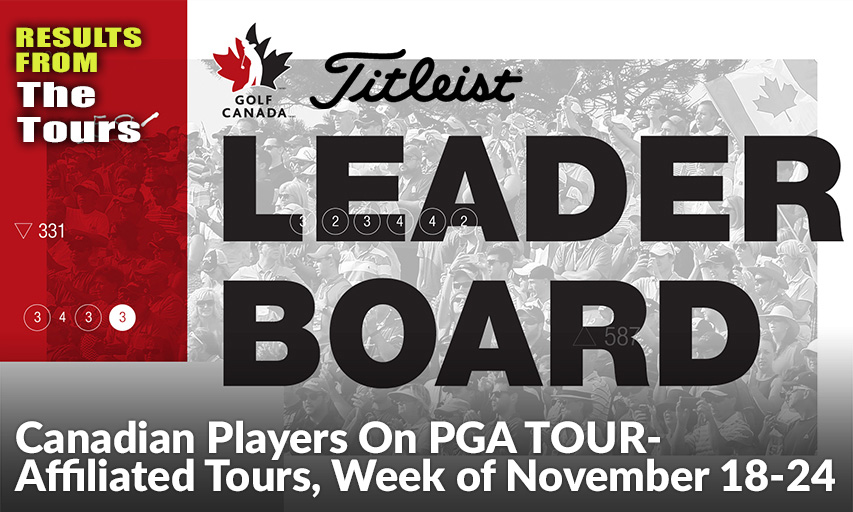 Tyler Duncan made a 12-foot putt on the second playoff hole to defeat Webb Simpson and win the RSM Classic for his first PGA Tour title. Duncan, who birdied three of the last four holes in regulation, just regained his PGA Tour card with a 12th-place finish in the Korn Ferry Tour Finals. …For the second time in the last three tournaments, David Hearn posted four sub-70 rounds. …After missing the cut in each of the first three tournaments of 2020, Mackenzie Hughes has made the weekend cut in three of his last four starts. …After playing a combined 36-under par in his first two events of 2020, Adam Hadwin is a total of 3-under par in his last three tournaments. …Prior to this weekend, Nick Taylor had missed the cut just once in his first five starts. …Micheal Gligic has missed the cut in each of his last two starts.

Sei Young Kim sank a 25-foot birdie on the final hole of the CME Group Tour Championship to win $1.5 million, the richest prize in the history of women’s golf. Charley Hull of England birdied her last three holes to put her into a tie for the lead, putting the pressure on Kim to sink the ‘money putt’ and win the tournament. Kim’s wire-to-wire victory was her third LPGA title of the year and 10th of her career.  …Brooke Henderson, who was second in the CME season points standings going into the championship, finished fifth, three strokes behind the winner. …Alena Sharp posted her best career-finish at the CME Tour Championship

Jon Rahm needed a birdie on the final hole to capture the season-ending World Tour Championship and the $5 million Race to Dubai title. Tommy Fleetwood, who would have become European No. 1 with a win, finished one stroke back despite birdies on five of his last seven holes. Rahm became only the second Spaniard to end the season as European Tour’s No. 1 player, after the late Seve Ballesteros. There were no Canadians entered in the event. …Earlier in the week Aaron Cockerill finished seventh overall at the Q-school event in Spain to earn a partial exemption on the 2020 Tour.

A total of three Canadians have advanced to the Final Stage of PGA Tour Champions Qualifying. David Morland IV, Kevin Baker and Jim Rutledge were among the 50 players who advanced across three separate qualifying tournaments held in Florida, Texas and California. Rutledge finished runner-up at the California tournament, three shots behind medalist Thongchai Jaidee. All three will take part in the Final Stage in Arizona next month where the top five will earn Tour cards for the 2020 season.