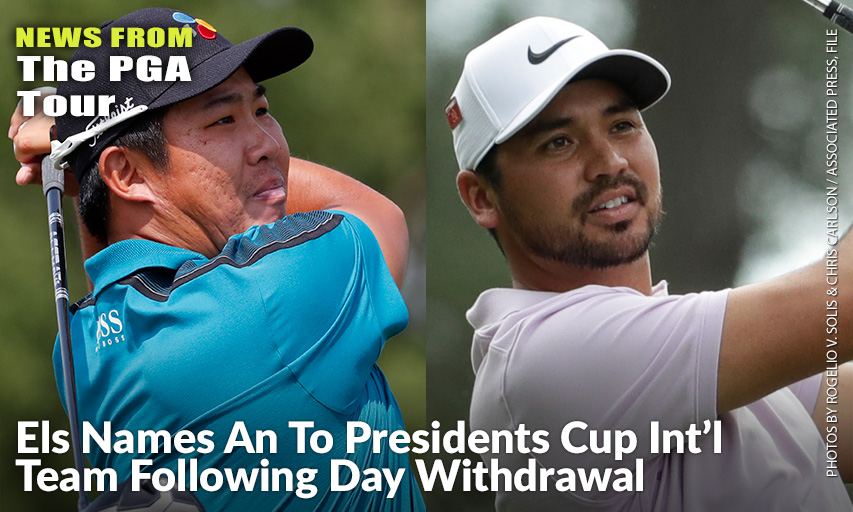 MELBOURNE, Victoria, Australia — Presidents Cup Captain Ernie Els announced that Korean Byeong Hun An will join the International Team following the withdrawal of Australian Jason Day. Day, who recently was selected by Els as a captain’s pick to be a part of the International Team for the fifth time, announced that he has been forced to withdraw from the 2019 competition due to a back injury. The Presidents Cup will return to Melbourne, Australia and The Royal Melbourne Golf Club for the third time, December 9-15, 2019.

“We wish Jason well and hope his back recovers quickly. We were eager to have Jason as part of the team at Royal Melbourne and his experience will be missed,” Els said. “The good news is that there were a number of strong and qualified players available to choose from when I made my captain’s selections. To have someone as steady and talented as Ben An puts us in a great position to succeed. Ben played extremely well this fall and throughout the year and he will fit in nicely on this team.”

With An’s inclusion, the International Team will now feature two Korean players as 2019 PGA TOUR Rookie of the Year, Sungjae Im is also on the team as one of Els’ picks.

During the 2018-19 PGA TOUR Season, An enjoyed three top-10s and eight top-25 finishes including a third-place result at the Wyndham Championship in August.

He finished 15th on the International Team standings to miss out on automatic selection for the Presidents Cup, but put together a strong case for a captain’s pick by starting the 2019-20 PGA TOUR season on a strong note. This strong start included top-10s at the Sanderson Farms Championship (3rd), THE CJ CUP @ NINE BRIDGES (T6), and ZOZO CHAMPIONSHIP (T8). He also finished T14 at the World Golf Championships-HSBC Champions.

Day’s statement: “I’m quite disappointed I won’t be coming home to play in either the Australian Open in Sydney or the Presidents Cup the following week in Melbourne. I was quite looking forward to both events. I had been prepping all week in Palm Springs when I was injured. Frustratingly, I’ve been through back problems before and my medical team decided it best to shut down all practice and play. Therefore, I wanted to inform Golf Australia as well as provide Ernie as much time as possible to best prepare our International Team for Royal Melbourne. I look forward to playing at home in the near future. My best to all the competitors in Sydney and my teammates in Melbourne.”

Day finished No. 9 in the International Team standings and owns a 5-11-4 Presidents Cup record.

About the Presidents Cup
The Presidents Cup is a unique golf event in that there is no purse or prize money. Players are not paid for their participation, but each competitor allocates an equal portion of the funds generated to charities of his choice. Since the event’s inception, more than $49.1 million has been raised for charity from event proceeds, as well as contributions made on behalf of the Presidents Cup, including a record charitable donation of $10.7 million from the 2017 event alone.

Citi and Rolex are the exclusive Global Partners of the Presidents Cup.

About Rolex
An unrivalled reputation for quality and expertise.

Rolex, a Swiss watch manufacture headquartered in Geneva, is recognized the world over for its expertise and the quality of its products. Its Oyster and Cellini watches, all certified as Superlative Chronometers for their precision, performance and reliability, are symbols of excellence, elegance and prestige. Founded by Hans Wilsdorf in 1905, the brand pioneered the development of the wristwatch and is at the origin of numerous major watchmaking innovations, such as the Oyster, the first waterproof wristwatch, launched in 1926, and the Perpetual rotor self-winding mechanism invented in 1931. Rolex has registered over 500 patents in the course of its history. A truly integrated and independent manufacturing company, Rolex designs, develops and produces in-house all the essential components of its watches, from the casting of the gold alloys to the machining, crafting, assembly and finishing of the movement, case, dial and bracelet. Through philanthropic programmes and a broad palette of sponsorship activities, Rolex is also actively involved in supporting the arts, sports and exploration, and encourages the spirit of enterprise, as well as the conservation of natural environments.

About Melbourne – A Golfing Great
There are many sides to Melbourne. It’s serious yet playful, quiet yet dramatic, sport-obsessed yet in love with the creative industries.

Melbourne is a city that is constantly evolving, improving and changing, every day and all year round. The city innovates, is hungry for new ideas and delivers unexpected experiences from its inspired laneways, bars, art spaces, restaurants and boutiques.

Melbourne, and Victoria’s regions including the Bellarine and Mornington Peninsulas, are also home to Australia’s finest golf courses.

The famed Melbourne Sandbelt is superbly regarded internationally, with eight courses epitomising the golden age of golf architecture. These highly ranked layouts are built on land in the southeast suburbs and are conveniently located within a short distance of each other.

In 2018, Melbourne hosted the PGA TOUR’s World Cup of Golf, with the Royal Melbourne Golf Club proud to welcome the 2019 Presidents Cup for the third time this year. The Australian Open of Golf returns to the city in 2020 and 2022.