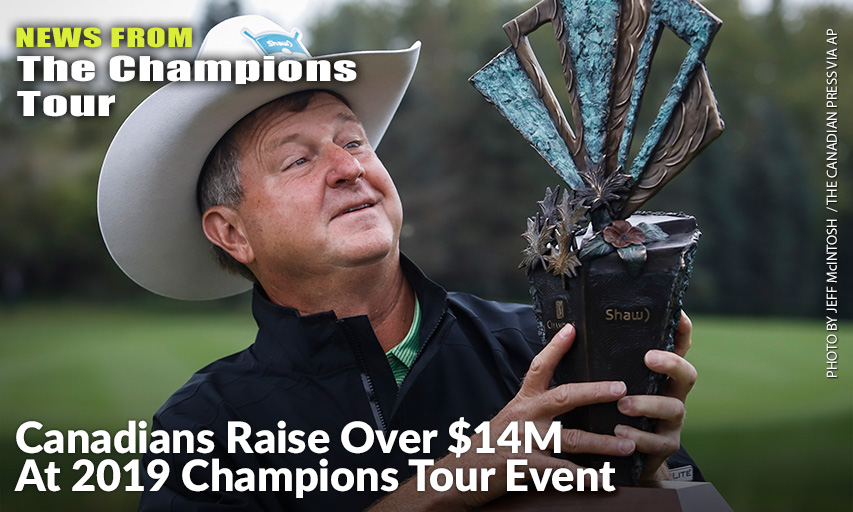 CALGARY, Alberta — Canadians made a major mark on the 2019 edition of the Shaw Charity Classic by chipping in to raise a record $14,071,188 for 200 youth-based charities across Alberta.

The seventh-straight record-setting donation for any event on the PGA TOUR Champions now brings the award-winning tournament’s fundraising totals to more than $48 million since it first teed off in Calgary in 2013.

“It is an absolute thrill for me to look back on another record-setting year and realize this spectacular tournament continues to have a tremendous impact on our youth, which was the core goal in bringing the event to Calgary,” said Jim Riddell, who was determined to build on his late father Clay’s legacy of ensuring the Shaw Charity Classic continues to have a positive impact on Alberta youth when he took over as Tournament Chairman last fall.

“I firmly believe it takes an entire community to build a successful international event of this magnitude, so this accomplishment should be celebrated by everyone – from the more than 1,400 volunteers, to our generous corporate community, friends in the media, and all of the great citizens of this amazing city who came down to Canyon Meadows this summer. Each of you have made Calgary one of the top stops on the PGA TOUR Champions, and for that, I thank you.”

With the tournament’s charitable spirit rooted in the generous leadership of its corporate partners of the Shaw Birdies for Kids presented by AltaLink program, the record donation in 2019 will have a positive impact on thousands of youth representing 200 charities that includes the areas of sports, arts, health, development and counselling.

“The Shaw Charity Classic has become a powerful example of what can be accomplished when family, charity, and community rally together for a common cause,” said Brad Shaw, CEO, Shaw Communications. “Over the past seven years, we have seen the Calgary community support this tournament in ways we never could have imagined, and we are exceptionally grateful for their continued enthusiasm and generosity as we continue to grow the Shaw Charity Classic to help more kids and their families.”

The Shaw Birdies for Kids presented by AltaLink program, which ramped up the tournament’s charitable giving arm when it was created in 2015, welcomed donations from Canadians in all corners of the country.

“In the five years since we helped launch the Shaw Birdies for Kids Presented by AltaLink program, we have been overwhelmed by the generosity of Albertans in supporting hundreds of children’s charities throughout our province,” said Scott Thon, AltaLink President & CEO. “The incredible growth of Birdies for Kids means that more kids are getting the assistance they need for a bright future. We know that supporting kids today leads to a great community and province tomorrow.”

The records didn’t stop with the financial side of the tournament in 2019. A star-studded field of PGA TOUR Champions players highlighted by six World Golf Hall of Fame members including: Bernhard Langer, Davis Love III, Retief Goosen, Colin Montgomerie, Mark O’Meara, and Vijay Singh put on a stellar show in 2019. In the end, it was Wes Short Jr. who sported the winner’s white Smithbilt Cowboy Hat after holding off two-time defending champion, Scott McCarron. Short had luck on his side when his ball took a favourable bounce off a rock in the water hazard on the final hole to land on the green. Short went on to two-putt for his second PGA TOUR Champions title.

Another highlight in 2019 was the inaugural Super Saturday at the Shaw Charity Classic, presented by Freedom Mobile which featured a live concert experience with country music artist, Chad Brownlee, on the 10th fairway. The concert took centre stage following a nine-hole Celebrity Shootout where Brownlee battled with NHL and CFL greats, along with many of Canada’s Olympic best for $40,000 in charity prize money. Each participant received $1,000 for their charity of their choice in the Shaw Birdies for Kids presented by AltaLink initiative.

Shaw Communications confirmed this summer the award-winning golf tournament will return to Calgary through to 2022. Officials are already focused on planning the eighth running of the Shaw Charity Classic. The event is slated for Canyon Meadows Golf and Country Club, August 24-30, 2020. Corporate packages and holiday tickets sales for the Shaw Charity Classic are available online at www.shawcharityclassic.com.

About the Shaw Charity Classic
The Shaw Charity Classic will host some of the greatest names in the game of golf in Calgary at the Canyon Meadows Golf and Country Club, August 24-30, 2020. The field, which will consist of 78 stars on the PGA TOUR Champions, will compete for US $2.35 million in a three-round, 54-hole stroke-play tournament. The winner will receive US $352,500. The annual PGA TOUR Champions stop in Canada showcases Calgary to the world through its broadcast on the Golf Channel. Led by a philanthropic Patron Group including Tournament Chairman – Jim Riddell, Allan Markin, Keith MacPhail, Guy Turcotte, Gary Peddle, Mike Culbert and PGA Tour Professional – Stephen Ames, along with title sponsor, Shaw Communications, the Shaw Charity Classic won the prestigious President’s Award as the top event on the PGA TOUR Champions in 2017, 2015 and 2014. The Tournament has raised more than $48 million in its first seven years, with a PGA TOUR Champions record-setting donation of $14,071,188 raised in 2019 that was distributed amongst 200 youth-based charities in Alberta. For more information on the event, please visit www.shawcharityclassic.com. Follow the Shaw Charity Classic at facebook.com/shawcharityclassic and on Twitter @shawclassic.