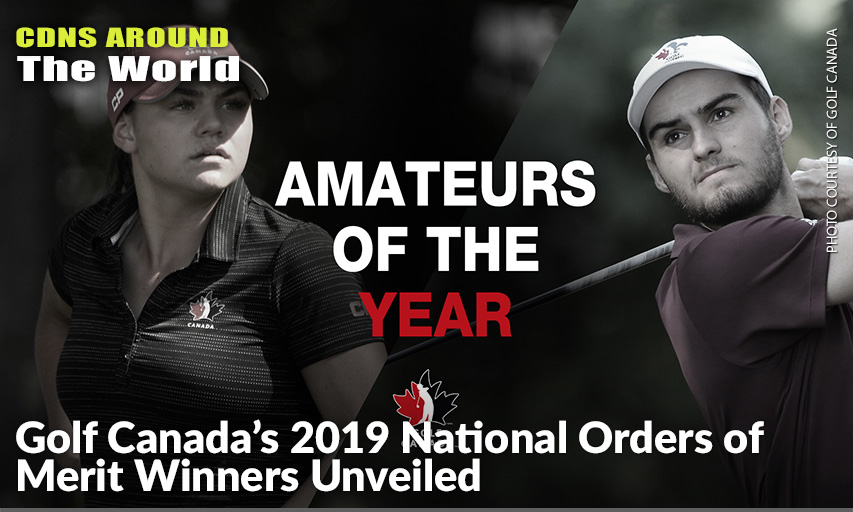 OAKVILLE, Ontario — Golf Canada is proud to announce the top finishers in the standings for its 2019 National Orders of Merit, a year that saw Québec-based golfers capture top honours in all four awarded categories, male and female in both amateur and junior golf.

On the amateur side, it is Réunion-Island born and Gatineau, Qué. resident Julien Sale, of Rivermead Golf Club, who claims top spot overall for the National Men’s Order of Merit. A senior at Arkansas State, Sale is ranked #160 on the World Amateur Golf Ranking (WAGR). The former Alexandre de Tunis and Québec Men’s Amateur champion built on an impressive 2018 season by qualifying for the 2019 U.S. Men’s Amateur and making it to the round of 32. He also finished T4 at the 2019 Canadian Men’s Amateur Championship.

After four straight years of domination for Ontario’s Maddie Szeryk, there is a new victor in the National Women’s Order of Merit for 2019: Brigitte Thibault. The Rosemère, Québec, native and Team Canada Amateur Squad member is presently a junior at Fresno State and made quite a splash at the NCAA level by notching eight top-15 finishes during her sophomore year. Thibault followed up by winning the 2019 Mountain West Championship. Thibault has also claimed the title of 2019 Ontario Women’s Amateur Champion, represented Canada at the inaugural Augusta National Women’s Amateur and was a part of the Pan American Games bronze-winning Canadian formation.