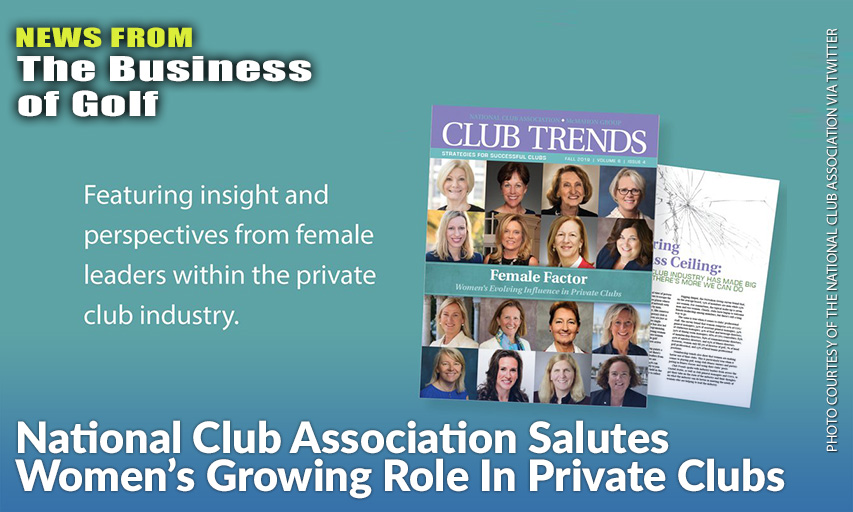 WASHINGTON, D.C. — The social change that has swept America over the past generation has also transformed private clubs, not to mention the private club industry, and that change is particularly important when it comes to the role women play in clubs as members, club leaders and employees. The National Club Association (NCA) salutes the growing role of women in private clubs in Club Trends magazine, with an issue entitled Female Factor: Women’s Evolving Influence in Private Clubs.

“The growing influence of women in private clubs is probably the most important trend in the private club industry over the past decade,” said Terra Waldron, National Club Association Chair and General Manager/COO of Greensboro Country Club. “From the greens to the boardroom to the corner office, women are more prominent and influential than ever before at clubs across the United States.”

The issue discusses a survey of private club leaders conducted by McMahon Group that found that the industry has made significant progress. According to the survey, clubs have begun to welcome female leadership among members and professional staff, and women members are more active in their clubs. McMahon Group President Frank Vain notes that in surveys with club members that women also are more involved in decisions to join clubs. “The data clearly illustrate that women and men use different criteria when deciding to join a club, and increasingly, the decision to join a club is a household one, so club leaders need to position their club to serve everyone, not just the male golfer.”

The issue also features interviews with women industry leaders from across the United States, as well as women serving as club general managers and COOs, who provided their perspectives on the state of the industry and what the industry can do better in meeting the needs of women who are helping to lead the industry.

“This is a groundbreaking issue of Club Trends,” said NCA President & CEO Henry Wallmeyer. “Women leaders are transforming their clubs and the entire industry, and I’m proud that NCA is supporting this movement. The private club industry is more inclusive and diverse than ever before, and as more women take on leadership positions club boards, in the C-suites of clubs, and throughout the industry, this trend will continue to grow.”

About NCA
The National Club Association (NCA) has been the advocate for the private club industry in Washington, D.C., for nearly 60 years. As the voice of private clubs on Capitol Hill, NCA ensures that club concerns are forefront when legislative and regulatory issues affecting the industry are being decided. In addition, NCA provides club leaders an outstanding array of resources on club industry trends, governance best practices, legal and operational matters and ways to strengthen club leadership. For more information, please visit www.nationalclub.org.