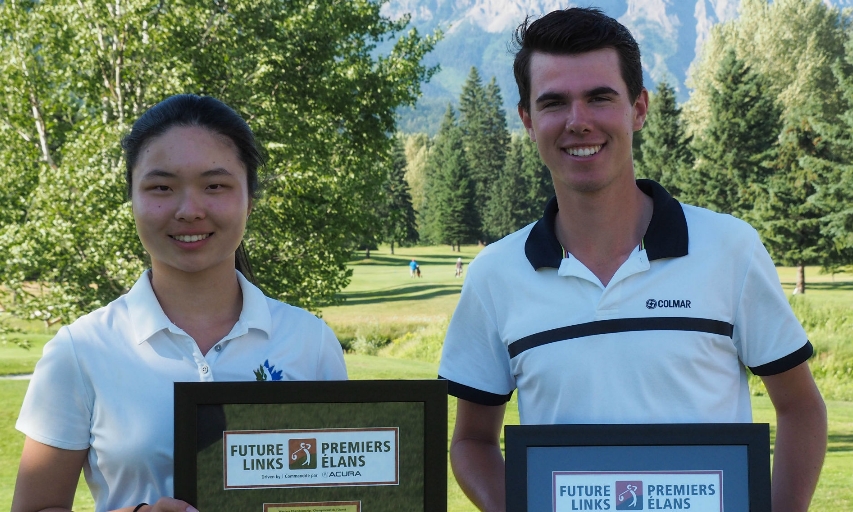 Angela Zhang (L) Of Vancouver And Logan Carver (R) Of Calgary Are Your Girls And Boys Champions Respectively From The Future Links, driven by Acura Western Championship at Fernie Golf and Country Club. (Photo/Golf Canada)

FERNIE, British Columbia (Golf Canada) — Logan Carver rebounded after a sloppy start to edge the competition in the final holes while Angela Zhang won the girls division at the Future Links, driven by Acura Western Championship at Fernie Golf and Country Club.

Carver shot a 3-over-par 73 to complete his wire-to-wire victory by one stroke. The 18-year-old, who held the lead through the first two rounds, recorded four bogeys on the front nine and two more immediately after making the turn to fall three strokes behind both Ty Steinbring and Ethan Choi.

Carver capitalized on late mistakes by the other two boys and finished the tournament going birdie-birdie and scraping out the victory. Choi (Pincher Creek, Alta.) and Steinbring (Barrhead, Alta.) looked like they were clear of Carver heading down the stretch, but Choi carded two bogeys in his final four holes and Steinbring fell down the leaderboard due to a triple bogey on the 15th hole, opening the door for Carver’s dramatic finish.

Choi carded a final-round 72 to secure his second-place finish while Steinbring shot a 4-over-par 74 to finish in third, two strokes back of Carver. Rounding out the top six finishers in the boys division who earned exemptions into the 2017 Canadian Junior Boys Championship on July 31-Aug. 3 at Cataraqui Golf and Country Club in Kingston, Ont., are: Bennett Ruby (Waterloo, Ont.), Hunter Thompson (Calgary, Alta.) and Michael Valk (Medicine Hat, Alta.).

Zhang shot a 1-under-par 71 to lock up the girls division and win her first Future Links, driven by Acura event. The 15-year-old Vancouver native was leading after the first round on Tuesday, but she entered Thursday one shot back of Claire Lovan of Surrey, B.C. Zhang got off to a good start going bogey-free on the front nine and managed to hold off Lovan’s late surge to come away with a two-stroke victory.

Lovan, also 15, struggled to start her final round and carded two bogeys and a double bogey on holes four, five and six. After she made the turn, Lovan managed to close out her round bogey free and dropped in two birdies during her last four holes, but the push was too late to catch Zhang.