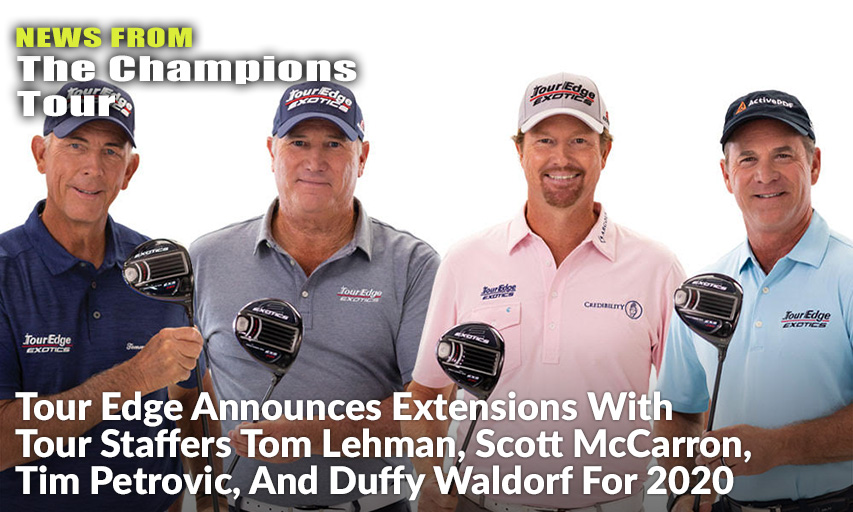 Tour Edge Golf has announced that it has come to terms to extend all four of its logo tour professional staff players for 2020.

The company announced that in conjunction with the signings, they have filmed several TV spots to air in 2020 featuring all four of the logo staffers.

“Tour Edge is continuing to make major steps in our branding and consumer awareness efforts and the best spokespeople that we could ask for just happen to be the guys that we already have on our tour staff,” said Executive Vice President of Tour Edge John Craig.

“2020 will be our third year with these players representing Tour Edge and playing our equipment on tour, so filming them for an extensive television advertising campaign is the logical next step in branding Tour Edge,” said Craig.

“These professionals have become very close with us over the last couple years and have really embraced what we are doing as a company. We can’t wait for the world to see the spots we have put together with these legends of the game.”

The Tour Edge spots featuring the tour staff will start airing in January of 2020 on various media, including the Golf Channel. The players will also take part in Tour Edge’s sponsorship of PGA Tour Champions Learning Center show on the Golf Channel.

There have been over 650 Tour Edge clubs in play on the three PGA Tours over the last two seasons. In that time, they have earned over 50 Top 5’s and over 200 Top 25’s in the bags of over 90 different PGA Tour professionals.

Tour Edge was a part of five victories this season on the PGA Tour Champions, adding to their seven wins from 2018 and have been in play for 27 wins or runner-up finishes in the last 50 PGA Tour Champions events played.

About Tour Edge
Tour Edge, an American owned and operated company for more than 34 years, manufactures and sells golf clubs under three distinct brand names: Exotics, Hot Launch and their “Get in the Game” products.

In 1986, David Glod founded Tour Edge with a focus on offering high quality and technologically advanced golf products that were as cutting edge as they were affordable.

Today, Glod is considered one of the preeminent master club designers in golf club design and has led Tour Edge to be a Top 10 manufacturer in every club category.

Tour Edge clubs have been in play in every PGA TOUR major championship event and in Ryder Cup competitions. Since 2018, over 650 Tour Edge clubs by over 90 different professionals have earned 12 wins, 16 runner-up finishes, over 50 Top 5 finishes and over 100 Top 10 finishes on the PGA Tours.