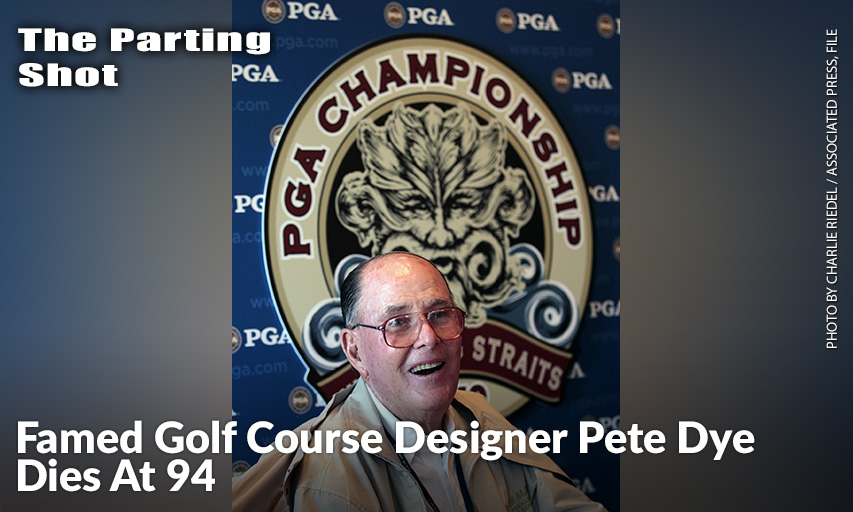 Pete Dye never thought golf was meant to be fair, inspiring him to build courses that visually intimidated recreational players to the best in the world.

The island green at the TPC Sawgrass. Railroad ties that gave frightening definition of putting surfaces fronted by water. More bunkers than could be counted at Whistling Straits.

Dye, among the forefront of modern golf architecture, died Thursday morning in the Dominican Republic at age 94, a spokesperson at Dye Design said. He had been battling Alzheimer’s disease for several years.

“You respected him because he built some great golf courses, but in the midst of playing them, you hated his guts,” Brandt Snedeker said with a smile.

His name turned out to be the perfect adjective for his challenging courses — “Dye-abolical.”

Jack Nicklaus said he owes his second career in golf course design to Dye, whom he first met some 50 years ago.

“I think Pete Dye was the most creative, imaginative and unconventional golf course designer I have ever been around,” Nicklaus said. “Pete would try things that nobody else would ever think of doing or certainly try to do, and he was successful at it. If there was a problem to solve, you solved it Pete’s way. In the end, Pete’s way usually turned out to be the right way.”

Greg Norman referred to him as the “Picasso of golf architecture” who changed golf course design in the 20th century.

His golf courses have held four major championships, most recently at Whistling Straits in Wisconsin, which will host the Ryder Cup this year.

“While Pete designed to torment the most accomplished professional, his forward tees allowed the most inexperienced to play,” said Herb Kohler, who brought Dye to Wisconsin to build courses such as Whistling Straits and Blackwolf Run. “He would challenge the professional both physically and mentally, while remarkably accommodating the raw amateur who was learning the game..”

Dye also had several courses on the PGA Tour, mostly notably the TPC Sawgrass, where the Stadium Course has held The Players Championship since 1982. It was little more than swamp land that the PGA Tour purchased for $1. Dye turned it into a course where there hasn’t been a stereotype for the brand of golf that suits it best.

It can be scary. It can yield low scores. There is rarely a dull moment.

PGA Tour Commissioner Jay Monahan called him ”one of the most important course architects of this or any generation.”

The major champions at Dye’s courses included John Daly at Crooked Stick for the 1991 PGA Championship; Vijay Singh, Martin Kaymer and Jason Day at Whistling Straits for the PGA Championship in 2004, 2010 and 2015; and Rory McIlroy at Kiawah Island in the 2012 PGA Championship.

“You can’t mistake a Pete Dye. You knew it was his as soon as you played it,” Singh said. “He had a different set of rules when he built golf courses and every single one he built was tough.”

Suzy Whaley, the president of the PGA of America, said Dye “left an imprint on the world of golf that will be experienced for generations, painting wonderful pictures with the land that continue to inspire, entertain and challenge us.”

Many of the courses were designed with his wife, Alice, who died last February at 91. She famously suggested to her husband as they were clearing out a swamp at Sawgrass, “Why not just make an island green?”

“He was an icon when it comes to golf course design,” said Snedeker, who won at the Dye-designed Harbourtown Golf Links in Hilton Head, South Carolina. “He was a guy who really made you uncomfortable the whole round. And he did it visually. He’d always make you think.

Born in Urbana, Ohio, Dye sold life insurance when he and his wife had a chance to build their first golf course, a nine-hole track near Indianapolis called El Dorado.

The next year, his wife sent out a rendition of the course with hopes they might get more work. One letter went to Richard Tufts, a former USGA president whose family owned Pinehurst. Alice Dye had won the North & South and knew Tufts.

“He wrote back and said he thought it was wonderful,” Dye said in 2008 when he was selected for the World Golf Hall of Fame. “He said, ‘I think it’s wonderful of you kids to build this nine-hole golf course. But don’t you think crossing a creek 13 times in nine holes is just a little too much?”’

The following autumn, Dye said Harlan Hatcher from the University of Michigan was passing through Indianapolis and played his nine-hole course. That led to him bringing Dye to Ann Arbor to build the university’s golf course.

“And we’ve been digging up other people’s property ever since,” Dye said.

Charles Howell III recalls the time Dye walked nine holes with him for a practice round at Whistling Straits during the 2004 PGA Championship.

“I would ask him, ‘Mr. Dye, why would you put that bunker right there. What were you thinking?’ And he would look at me and said dryly, ‘Just to (tick) you off.’ He was a good man who obviously loved golf, just a wonderful course designer who knew how to make difficult golf courses,” Howell said.

“If you were going to play well around his places, you couldn’t fake it,” he said. “It’s a sad loss for golf. His footprint was at all of his places, undeniably, and not a lot of designers can say that. And boy, you knew it was going to be tough.”