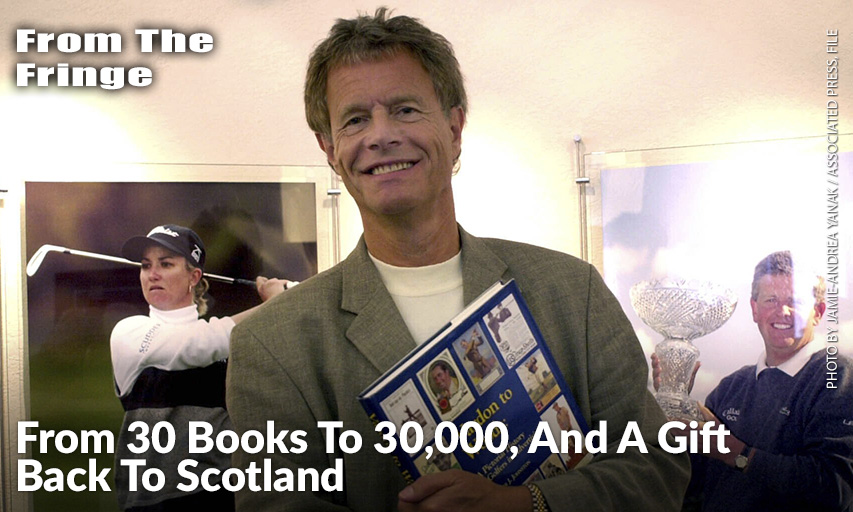 Alastair Johnston returned home to Scotland after an internship with IMG and brought with him 30 golf books that had been collecting dust in a storage room.

That was more than 50 years ago.

His next shipment to Scotland is going to be substantially more.

What began as a hobby has become the largest golf library in the world. Johnston has kept his stunning exhibit in rows of shelves on the second floor of his home in the Cleveland suburbs. It now contains more than 28,000 volumes covering five centuries of the royal and ancient game. So enormous is his library that it requires two volumes totaling 944 pages for the bibliography alone.

And he’s giving it all away.

Johnston, vice chairman at IMG and former chairman of Rangers Football Club, is gifting the entire library to the R&A in St. Andrews to establish the most comprehensive collection of golf books. The location has not been determined, though it will be within walking distance from the Old Course. It will be called the Alastair J. Johnston Library.

For the Scottish-born Johnston, it only made sense — for the home of golf and for himself.

In other words, he’ll still be searching, spending and acquiring. That’s what keeps him going.

One of his greatest finds was the first edition of “The Goff,” written by Thomas Mathison in 1743, the first book devoted to golf. His collection includes an original copy of the 1457 Scottish Acts of Parliament, in which the king banned golf because he feared it was taking time from archery practice.

It also has “The Chronicles of Golf,” an exhaustive tome that covers 400 years of history starting with the 1457 Scottish Acts of Parliament. Johnston and his father spent eight years researching and writing it.

Johnston grew up in Glasgow and is an R&A member. In his role at IMG, he has been heavily involved in TV negotiations for The Open Championship.

But this was more about his native home.

Johnston can recall more than one occasion when he was in Scotland and would find pamphlets from the 19th century or club histories that revealed so much about the early establishment of golf. Stuffing them into a briefcase, he would board a plane in Prestwick to return to IMG headquarters in Cleveland and feel like a thief.

“I was taking pieces of great Scottish history from authors,” Johnston said. “And I was thinking it should not have been leaving the country.”

The idea of returning it to Scotland never left him, even as the collection grew and he began to appreciate the magnitude of the library he was building. The trick was to find a beneficiary that could keep it together, grow it and protect it.

Is there a better fit than the oldest golf in the world? A better place than St. Andrews?

The R&A is making plans to move everything to St. Andrews, where it will be managed by the Museum and Heritage division. It’s part of a redevelopment plan ahead of the R&A celebrating the 150th British Open at St. Andrews in 2021. Johnston said it would be ambitious to have everything in place by then.

“We are committed to nurturing the world-class status of the library and ensuring that Alastair’s legacy is maintained for the enjoyment of those who love this great sport,” said Martin Slumbers, chief executive of the R&A.

That might be the best part of this enormous gift.

St. Andrews is the top golf destination in the world, at least the most romantic. The gray, old town is steeped in centuries of golf heritage. It’s far more visible than the second story of a home in Pepper Pike, Ohio.

That’s not to suggest Johnston kept it all to himself.

He often built his global travel schedule around anyone who loved golf, literature and history and wanted to see the collection he had amassed. When the seniors were at Canterbury for majors, or the World Golf Championships was at Firestone in nearby Akron, there was plenty of traffic.

Johnston was Arnold Palmer’s longtime agent and top confidante for decades, and both Palmer and Gary Player toured the exhibit, along with Jim Nantz at CBS Sports and golf historians from all corners of the globe.

Those 30 books turned into to nearly 30,000 during a passion that lasted more than a half-century. Johnston always believed it was a library the likes of which would never be seen again.

Except that soon everyone will get a chance to see it.