Jimenez Beats Els And Couples In Playoff At Hualalai 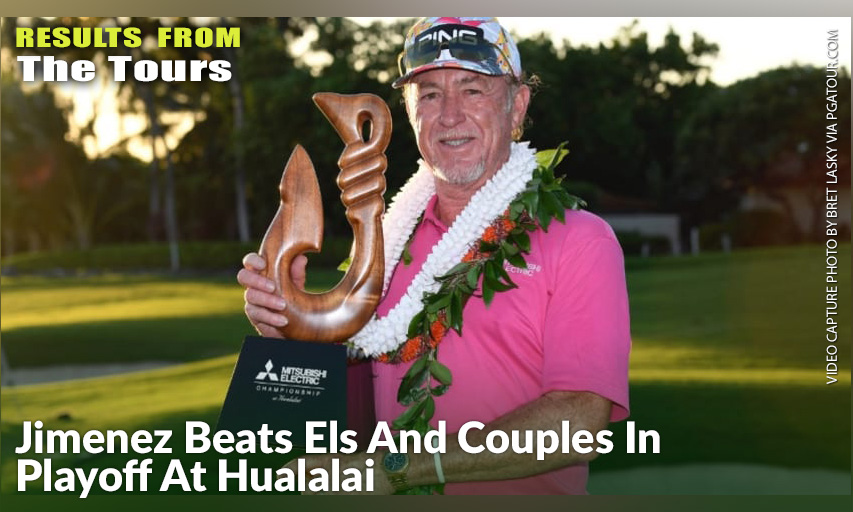 KA'UPULEHI-KONA, Hawaii — Miguel Angel Jimenez made a 12-foot birdie putt on the second hole of a playoff with newcomer Ernie Els to win the PGA TOUR Champions' season-opening Mitsubishi Electric Championship at Hualalai.

Fred Couples dropped out on the first extra trip down the par-4 18th at windy Hualalai, missing a short par putt.

"I said to my caddie, ‘The winning score is going to be 15-under par and we need to hurry up and make birdie,’" Jimenez said. "Make three birdies in a row, 14-under par and then here we are."

The 56-year-old Spaniard has nine victories on the PGA TOUR Champions, also winning at Hualalai in 2015. He has won in all seven of his senior seasons.

"Played well every year here and it's nice to have a second win," Jimenez said.

Els made his PGA TOUR Champions debut with an even-par 72 to fall eight strokes behind leaders Jimenez and Bernhard Langer, then rallied with consecutive 65s. The four-time major winner from South Africa had an eagle and five birdies, chipping in on the par-4 16th for his final birdie.

"Disappointing, obviously," Els said. "I would have loved to got it through, but I had a couple of chances, didn't quite get the right speed or the right line, but all good. Congrats to Miguel."

Jimenez and Couples left birdie tries to win on the 18th in regulation just short, and Jimenez had a birdie putt stop on the edge on the first extra hole.

With the wind down, Els' 12-footer to win on the first playoff hole ran by the right edge. On the second extra hole, his 20-footer went by on the right side before Jimenez holed the winner.

"Not going to be short," Jimenez said.

Els missed a chance to become the 19th player to win in his tour debut. Jimenez was the last to accomplish the feat in the 2014 Greater Gwinnett Championship.

"The first day, it was pretty disappointing," Els said. "I was almost last in the field. Then I got myself back up and played some really good golf."

Jimenez ended up with the victory lei.

Retief Goosen shot 64, the best round of the week, to tie for fourth with Wes Short Jr. at 12 under. Short closed with a 67.

Langer, tied for the lead with Els, Couples and Jimenez with two holes left, finished double bogey-bogey for a 71. The 62-year-old German star, a three-time winner at Hualalai, hit long and left into the lava on the par-3 17th.

Second-round leader Woody Austin, playing in the final group with Langer, had a 73 to tie for ninth at 10 under.