Tiger’s Pursuit For No. 83 Resumes At Riviera 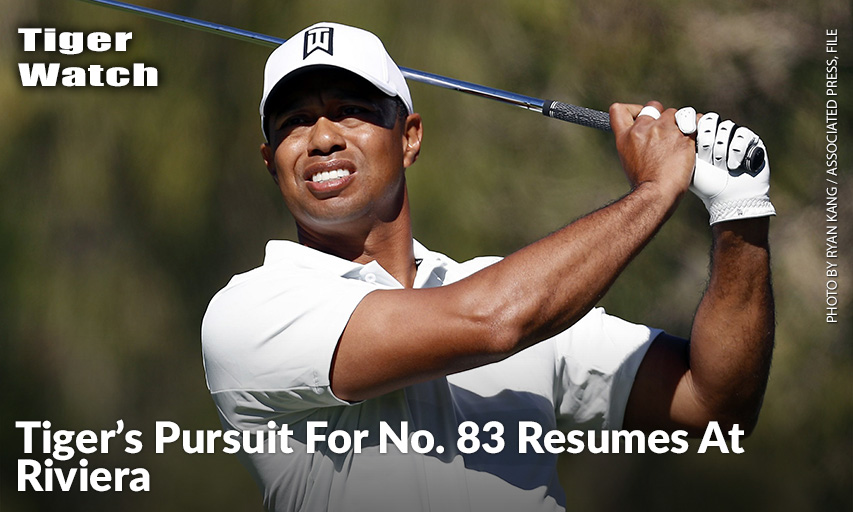 LOS ANGELES, California — There is no better place for Tiger Woods to set the PGA Tour record for most career victories than at Riviera.

Because this is where he played his first PGA Tour event as a 16-year-old amateur?

Because he now is tournament host of the Genesis Invitational, giving it the kind of elevated status — smaller field, bigger purse — enjoyed only by Jack Nicklaus at the Memorial and the late Arnold Palmer at Bay Hill?

Because it’s the course Woods has played the most times — 10 as a professional — without ever having won and he’s due?

What makes Riviera ideal is because it’s the next one on his schedule. And the sooner Woods can win No. 83 to break the record he shares with Sam Snead, the sooner everyone can stop speculating about the inevitable.

The question came up — how could it not? — about how special it would be for Woods to set the record at Riviera. He interjected by saying with a smile, “Yes, that’s been mentioned.”

It was mentioned three weeks ago at Torrey Pines when he started the new year, and that made just as much sense. Torrey Pines was the first PGA Tour event he attended with his father, the course where he won eight times, including that 2008 U.S. Open that he played with a double stress fracture and shredded knee ligaments.

Then again, Woods has left such an enormous trail in golf that winning anywhere would have some historical perspective.

It could be Bay Hill, where he has won eight times. Maybe the Masters, where he could set the record and tie Jack Nicklaus with a sixth green jacket. The U.S. Open is at Winged Foot, the first major he played after his father died and the first cut he ever missed in a major.

Woods hasn’t decided where he is playing or even how much this year — even the Mexico Championship next week remains up in the air — but odds are he will have won every tournament on his schedule except L.A.

Oddly enough, what made the career record feel so inevitable was a tournament he had never played.

Winning the Tour Championship (for the third time) at the end of the 2018 season was the first step in his comeback from four back surgeries. Winning the Masters (for the fifth time) made the comeback complete, for it was his first major after a drought of nearly 11 years.

But it was when he returned from a fifth knee surgery — this one the maintenance variety — and played the ZoZo Championship in Japan where he showed such a comfort level with his swing and with his game that more victories seemed certain to follow.

So how about now?

“I’ve played in a number of events over the years, and for me not to win an event that has meant so much to me in my hometown ... I’ve done well in San Diego, I’ve done well at Sherwood, just haven’t done well here,” Woods said. “So hopefully, I can put it together this week and we’ll have a great conversation on Sunday.”

Riviera is the closest PGA Tour stop to his hometown of Cypress in Orange County, about 40 miles away, although with traffic, it takes about as much time as the 90 miles from Cypress to Torrey Pines.

Woods has done well all over his home state: eight victories at Torrey Pines, three at La Costa, two at Pebble Beach, one at Harding Park (not including the Presidents Cup in 2009, where he went 5-0).

Riviera hasn’t been so friendly to him.

Woods withdrew after narrowly making the cut in 2006 because he was ill, and he stayed away for the next 12 years, only returning when a new title sponsor came on board and took on his TGR Ventures as the group running the tournament.

Not all memories are bad. He was runner-up in 1999 to Ernie Els — a bogey on the 13th cost him dearly, and a bogey on the final hole ended it for Woods. He also shared a story about one of the occasions he was at the tournament without clubs.

Woods was behind the ropes watching on the 11th tee when he heard Tom Watson was coming up the eighth hole, which was right behind him. He got there just in time for Watson to miss left while aiming for the back left pin position.

“I’m basically one of the only ones over there and Bruce (Edwards) was on the bag and I’m standing looking at the golf ball,” Woods said. “He comes over and says, ‘Move out of the way, kid,’ and pushes me out of the way. So I’m out on tour telling him this story and he says, ‘Well, you were in the way.’

“So for me to have experiences like that here at Riv and to have now this be my event ... hopefully on Sunday we’ll be having this discussion a little bit more.”

If not Sunday, then soon.