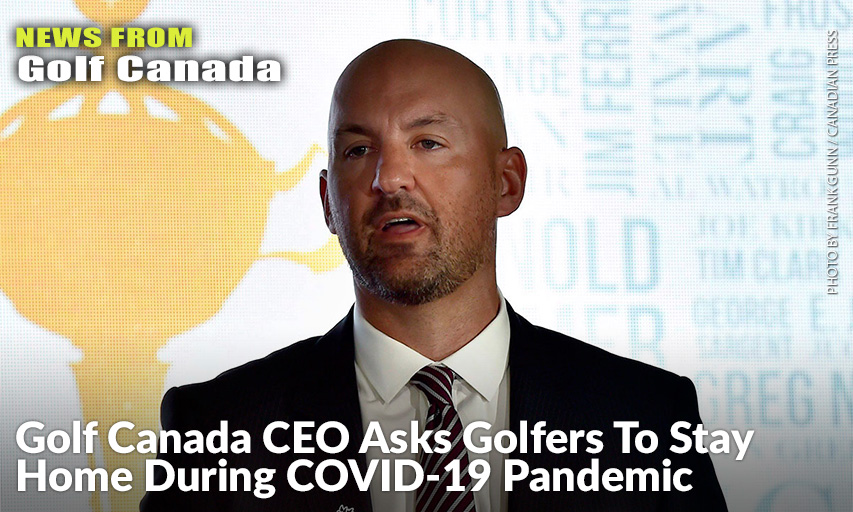 When restrictions on public gatherings to combat the novel coronavirus lift, Golf Canada CEO Laurence Applebaum knows his sport will be ready.

Until then, he hopes that amateur golfers follow the lead of professionals and stay home.

Applebaum spoke about golf’s unique position as a pastime that can lend itself to social distancing on Saturday as he himself was in a 14-day period of self-isolation after attending the PGA Tour’s Players Championship in early March. He’s seen articles and online discussions about how golf is relatively safe during the COVID-19 pandemic but he still advises against playing for now.

“I think it’s really a normal thought to see golf as a great activity with regards to some of the social distancing guidelines that were given, but I would give further thought to the fact that it’s a lot more interactive than you may think at the outset,” said Applebaum. “Everyone has to do their duty to not come into contact with others.

“So we’ll refer to the experts who are giving these guidelines and give Canada a chance to really plank the curve, not just flatten it.”

When the World Health Organization declared the COVID-19 outbreak a pandemic on March 11, the PGA Tour and LPGA Tour — which had already cancelled most of its events on the Asian leg of its circuit — cancelled or postponed events at all levels of competition.

Similarly, Golf Canada is likely to cancel or postpone all of its official events and training camps up to mid-May in an effort to protect its players and staff.

But the amateur golf season had not truly begun in Canada as the professional game took a pause. Even in parts of the country where it was warm enough to play, courses were still doing their start-of-season maintenance.

The provinces of New Brunswick and Quebec have closed all recreational facilities — including public and private golf courses — as part of those provinces’ efforts to stop the spread of the novel coronavirus. Municipal courses have also closed, as the cities that operate them closed them along with other public spaces like libraries, rec centres, and arenas.

But private courses in other provinces are still able to open and as spring arrives across Canada many clubs are weighing their options.

Applebaum can’t mandate that they close, but he said he has been in touch with most of the clubs across Canada and strongly suggested they close for the good of public safety.

“I will tell you that the overwhelming majority are thinking about the health and wellness of their staff, and of their overall memberships, and so the majority of them have closed their doors until further notice,” said Applebaum, who noted that a lot of golfers are older and vulnerable to COVID-19.

“It’s on a club-by-club basis and we’ve been providing the guidance of wanting to have everyone think about what (public health officials) have told us are the best things we can to be safe, be healthy, and to try and do all the right things to eradicate the coronavirus.”

Applebaum is excited for the role golf can play in Canada’s return to normalcy when public health officials begin to lift restrictions designed to stop the spread of COVID-19. He said that large sporting events with tens of thousands in attendance will be some of the last public gatherings to be restored but playing golf with friends, with its relatively small number of interactions, will be a perfect stepping stone to regular life.