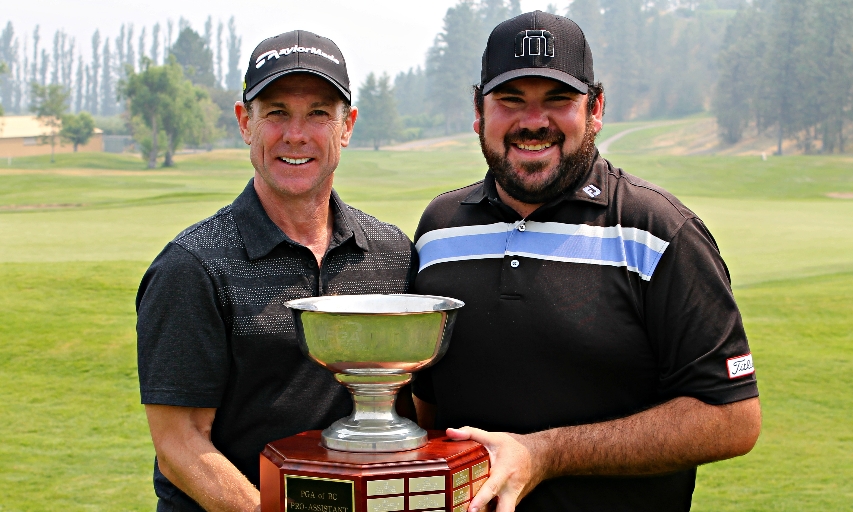 Fairview Mountain Golf Club's Brian McDonald (L) And Rob Tadey Won The G&G Golf Company And Callaway Golf Pro-Assistant Championship On Their Home Course With A Record Score Of 22-Under-Par. (Photo/PGA of BC)

Entering the scramble round with a four-shot lead, McDonald and Tadey matched the 11-under-par 61 they carded in best-ball play to reach 22-under for the event. They became just the third team in the event’s 25-year history to win at their own venue and set a new tournament scoring record relative to par.

“For us being the hosts, we had some pressure we put on ourselves, probably, but we’re pretty excited to have won the championship,” said McDonald. “Rob just played fantastic yesterday and I had a good day today. We just seemed to mesh really well.”

“We both showed up at the right time and made a few birdies and a few eagles,” said Tadey.

The Pro-Assistant Championship is a 36-hole team event in which a PGA of BC facility’s Head, Executive or Head Teaching Professional joins forces with one of their Assistant Professionals to take on other Pro-Assistant duos from across the province. The event opened with 18 holes of best-ball play and concluded with a scramble format.

The Two Eagles Golf Course & Academy team of Dean Claggett and Ethan Danish also posted a 61 but weren’t able to make up any ground on the overnight leaders, settling for runner-up honours at 18-under-par.

“They played phenomenal golf,” Claggett said of the winning twosome. “We thought we had a little opportunity on 16, we were sitting in about 12 feet (from the hole) and Brian’s at about 35; he rolls it in and we lip out. But that’s the beauty of the format and, hey, they played great.”

The entries from Quilchena Golf & Country Club (Victor Vianzon and Mark Kitts) and Osoyoos Golf Club (Colin Snair and Todd Tweedy) finished in a tie for third place at 14-under-par. Fairmont Chateau Whistler Golf Course’s Padraic O’Rourke and Jordan Rourke recorded the low round of the day – a 12-under-par 60 – to share fifth place with the GolfTEC Kelowna team of Patrick Martin and Nicklaus Kennedy at 13-under.

The victory continued a run of strong play for McDonald on his home course in 2017, as Fairview Mountain’s Executive Professional had already notched multiple competition rounds in the mid-60s at his facility this summer.

“I’d like to host every tournament here, and then my paycheques would be a lot higher, I think,” laughed McDonald.

“I’ve finished second (in the Pro-Assistant) four or five times, so I’m glad to finally win this thing.”

The 45-year-old also notched a runner-up finish at May’s Tournament of Champions, the PGA of BC’s other annual two-man team event, when playing with amateur Lance Johnston.

Tadey and McDonald took home the winner’s share of $2,400 with the win.

About G&G Golf Company
Since 1991, G&G Golf Company has provided custom logo accessories to golf facilities as a large part of its product mix. G&G Golf has an international sales force with representation covering over 1,500 accounts across North America. Backing up the sales team is a staff of 17 full-time employees based out of its Langley headquarters. Their products and services include a wide array of soft goods, hard goods, accessories and licensed merchandise, to name a few. For more information, visit www.gandg.ca.

About Callway Golf
Through an unwavering commitment to innovation, Callaway Golf Company (NYSE:ELY) creates products designed to make every golfer a better golfer. Callaway Golf Company manufactures and sells golf clubs and golf balls, and sells bags, accessories and apparel in the golf and lifestyle categories, under the Callaway Golf®, Odyssey® and OGIO® brands worldwide. For more information please visit www.callawaygolf.com and www.OGIO.com.