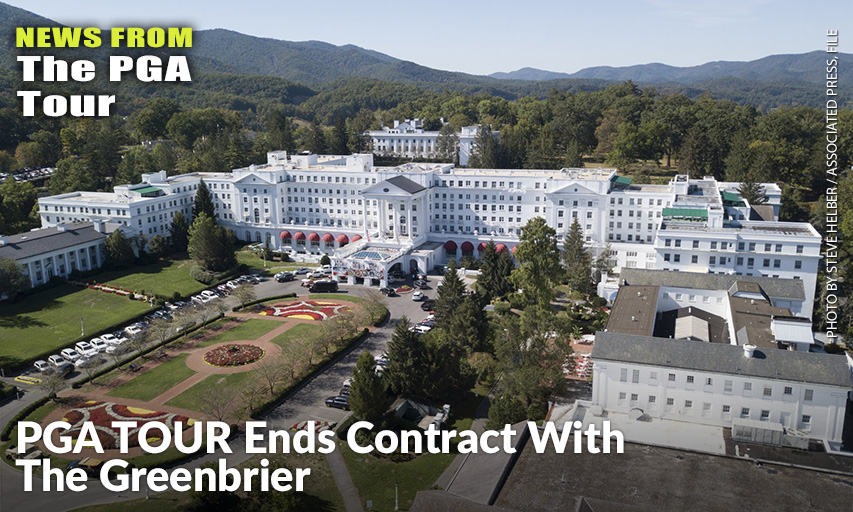 The Greenbrier resort issued a statement saying it came to an agreement with the Tour to cancel this year’s tournament because of the coronavirus pandemic and to cancel future golf contests that were scheduled at the resort through 2026.

The yearly tournament, A Military Tribute at The Greenbrier, has struggled to draw fanfare after moving from summer to fall. Last year, attendance dragged as the matches went up against college football home games, even as one of Justice’s family mining companies bought 30,000 tickets to give away to fans.

“We are happy to reach a resolution with the PGA Tour that is mutually beneficial to both parties in this time of crisis,” said Jill Justice, the governor’s daughter and president of The Greenbrier.

Justice, with a net worth of $1.2 billion spread through a wide portfolio of coal and agricultural businesses, brought the resort out of bankruptcy in 2009 and the golf tournament debuted a year later. He is considered to be West Virginia’s richest man.

The Greenbrier came under the scrutiny of federal prosecutors in a public corruption unit who sent three subpoenas to the governor’s administration last year for documents about the resort, the tournament, the tournament’s nonprofit financial arm and Justice’s tax records. The governor’s personal lawyer, George Terwilliger, a U.S. Department of Justice veteran who previously served as acting attorney general, told reporters at a January press conference that the investigation ended with no finding of wrongdoing.

West Virginia previously sponsored The Greenbrier’s golf tournament, but Justice said he ordered the arrangement to stop after taking office in 2017 because he didn’t want any perception of impropriety. The most recently available tax records for the nonprofit that operates the tournament show it with a $17.5 million debt in 2018.

The cancellations come as the PGA Tour reorganizes its schedule to adjust during the pandemic. The Tour also canceled the RBC Canadian Open, scheduled for June in Toronto, after it previously canceled the British Open for the first time since 1945 and pushed back other dates.

The tournament had its exciting moments. Two of the 11 sub-60 rounds in PGA Tour history were shot at The Greenbrier. Stuart Appleby shot 59 in the final round to win the inaugural tournament in 2010 by one stroke, and Kevin Chappell shot 59 in last year’s second round.

Andy Pazder, the PGA Tour’s executive vice president and chief of operations who is a 1988 graduate of West Virginia University, said The Greenbrier has been “a great partner.”

“We obviously needed to make some schedule adjustments late in the season or in the fall part of our new season, and in doing that it just caused us to reach an agreement with Greenbrier to remove them from the schedule,” he said.