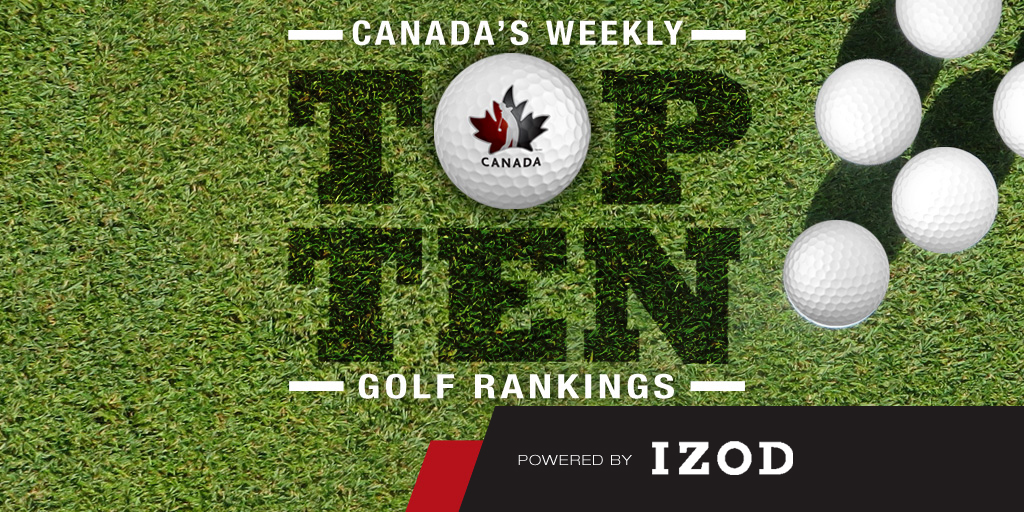 Austin Connelly made the biggest move among the Top 10, picking up 172 spots in the world ranking following his impressive showing at The Open Championship. The 20-year-old, who holds dual citizenship, finished in a tie for 14th in his first appearance at a golf major. At one point in the weekend, he was sitting in a tie for third. The former Golf Canada National Squad member just missed automatically qualifying for next year’s championship by two strokes. The result was worth 8.75 world ranking points, the biggest points-paying of his career to date. Connelly also moves up to No. 6 in the Canadian rankings.

Roger Sloan made a 37 place gain in the world rankings but it was not enough to stop the surging Connelly from moving past him. Sloan posted his third top 10 finish of the year, finishing in a tie for seventh at the Web.com Tour Pinnacle Bank Championship. The result was worth 2.21 world ranking points and marked his first points-paying finish in his last 10 events.

Graham DeLaet and Mackenzie Hughes continued their flip-flop atop the rankings with the Saskatchewan golfer reclaiming the No. 2 Canadian ranking after climbing one spot in the world rankings.

Alena Sharp maintained her No. 77 world ranking with her third top 15 result of the season, finishing in a tie for 13th at the Marathon Classic.

Matt Williams made the biggest move among the Top-10, gaining 50 places in the world ranking which enabled him to climb up from No. 9 up to No. 7 in Canadian rankings.

Golf Canada National Team member Hugo Bernard made the second biggest gain over the past week, picking up 23 places in the world rankings after finishing in a tie for seventh in his debut event on the Mackenzie Tour-PGA Tour Canada.

Top ranked Garrett Rank climbed three places up to No. 62 in the world rankings after finishing in a tie for fifth at the Porter Cup.

Chris Crisologo moved up six spots in the world rankings after finishing fourth at the B.C. Amateur Championship.

Joey Savoie climbs up to No. 4 in Canadian rankings, moving past Lawren Rowe.

Only significant movement inside the Top-10 was Selena Costabile gaining 28 places to move up one spot from No. 11 to take over the No. 10 ranking in Canada.

Golf Canada National Team members Jaclyn Lee and Naomi Ko took part in the Pacific Northwest Amateur Championship. Lee, seeded 13th, made it all the way to the Round of 16 before running into eventual champion Julianne Alvarez. Ko, the No. 8 seed, got as far as the semi-finals before losing to Alvarez.

Biggest Move: Christina Proteau gained 212 places in the world rankings after winning the PNGA Women’s Mid-Amateur Championship. The Port Alberni, B.C.  golfer, who was seeded No. 1 entering the match-play portion of the event, defeated Gretchen Johnson 3 and 2 in the final. A three-time PNGA Women’s Mid-Amateur Player of the Year, Proteau is five months pregnant with her second child.