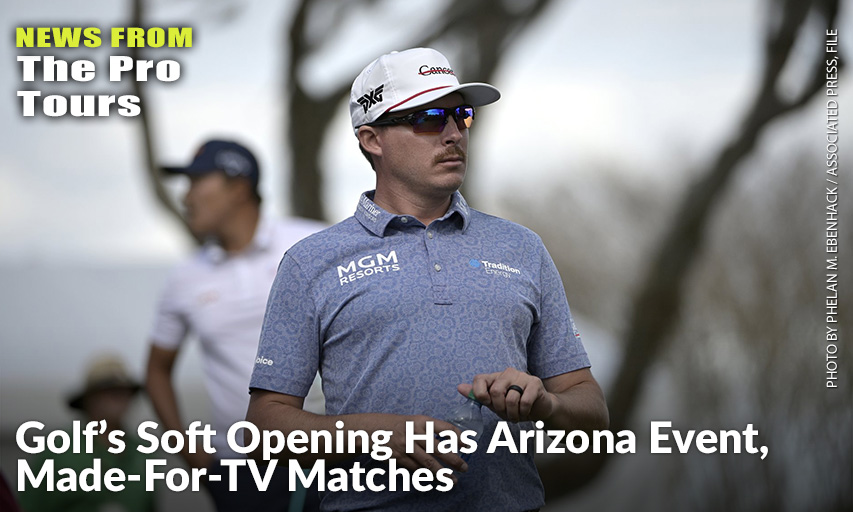 The next few weeks might resemble a return to the silly season.

Except this is serious business.

Besides, this isn’t the cash grab from the old “silly season” days of the Skins Game, the Skills Challenge, the Diner’s Club Matches. In two notable events, there’s no prize money at all.

Televised golf returns in South Florida with an exhibition match at Seminole to fund COVID-19 relief efforts. Two of golf’s biggest talents, Rory McIlroy and Dustin Johnson, take on Rickie Fowler and Matthew Wolff, who are linked by their time spent a decade apart at Oklahoma State (all four of them are linked by endorsement deals with TaylorMade, the title sponsor of the match).

[On May 24], some of the biggest names in golf and in the NFL get together for a $10 million charity match. Tiger Woods will have Peyton Manning as a partner against Phil Mickelson and Tom Brady.

It doesn’t really matter who wins.

This is about bringing entertainment to a sporting world devoid of live golf for the last two months and raising no small sum of money for coronavirus relief funds.

And in some respects, it’s a glimpse into golf not looking exactly the same when the real thing returns.

For the matches, there will be no caddies, no spectators and no media outside a very limited number to provide still photos and live commentary for a television production that will have fewer cameras. Some of the commentary will be done off property. Mike Tirico will be home in Michigan.

With no caddies for the Seminole match, laser measuring devices are likely. There won’t be any rakes alongside bunkers, though the sand will be raked by someone, perhaps a rules official.

All state and local mandates are to be followed — to what degree remains to be seen. This is an exhibition, sure, but it’s not quite the same as four players booking tee times online. This is more about the show than recreation.

These are made-for-TV exhibitions. Another test began at the Scottsdale Open in Arizona, which in some respects is even more intriguing.

In its fourth year, the 54-hole event at Talking Stick Golf Club ordinarily goes unnoticed outside the greater Phoenix area. But these are extraordinary times. PGA Tour-sanctioned events have been shut down for two months because of the pandemic, and they are a month or more away from resuming.

The Scottsdale Open suddenly has more than a dozen players with PGA Tour experience, a list that includes Rocket Mortgage Classic winner Nate Lashley, two-time tour winner Kevin Streelman and Joel Dahmen, who at No. 70 is the highest-ranked player in the field.

In a normal year, they would be at the PGA Championship.

The Scottsdale field is 162 players, and it even had a waiting list. Scott Harrington, a PGA Tour rookie, got in at the last minute. They are competing for a guaranteed purse of $130,000, which is a lot for this tournament, not so much for someone like Dahmen. He earned $330,000 in the last tournament he played, a tie for fifth at Bay Hill.

Dahmen was installed as the 5-1 favorite, and for good reason.

The last time he played was in a group of six at Mesa Country Club that included Ian Happ and Kyle Schwarber of the Chicago Cubs. There were drinks and laughs, and then Dahmen recalls it getting quiet on the 18th tee. Only after he made a 20-foot eagle putt did he realize he shot 58.

Dahmen also is a past champion at the Scottsdale Open. That was in 2017, his rookie year. Just like now, there was no golf for him to play, but only then because of his status. Dahmen wasn’t eligible for Colonial or the Memorial.

“I had a lot of time on my hands, and I needed something to play in,” he said.

That’s kind of how it is now.

Dahman doesn’t see this as getting back into tour shape. The Charles Schwab Challenge at Colonial in Fort Worth, Texas, is still a month away. Besides, it might not resemble anything at Colonial.

Ryan Pray, the Scottsdale tournament’s director, said players will have their own cart equipped with its own rake to handle bunkers. Caddies are allowed, but player and caddie can’t ride in the cart together. And players are told to practice social distancing. If they want to remove the flag stick, carts are equipped with sanitizers to wipe off the pin before replacing it.

Pray said the field — entry fees start at $795 for the first ones to register — was filling up even before the new coronavirus shut everything down. And then it really picked up when a few PGA Tour and Korn Ferry Tour players who live nearby joined the field.

“We don’t get too many people interested in this event,” Pray said, who hired a friend in the sports marketing business to help him out. “Every local news station is out there.”

The Twitter handle “Monday Q Info” posted video of early action, so at least there’s some video coverage. One showed Dylan Wu replacing the flag with his hand wrapped around a towel.

Whether it’s the Scottdale Open or made-for-TV exhibitions, all that matters is that players are competing. It’s not serious. It’s not silly, either. And it’s not even a return to normal, because no one knows what normal will look like.