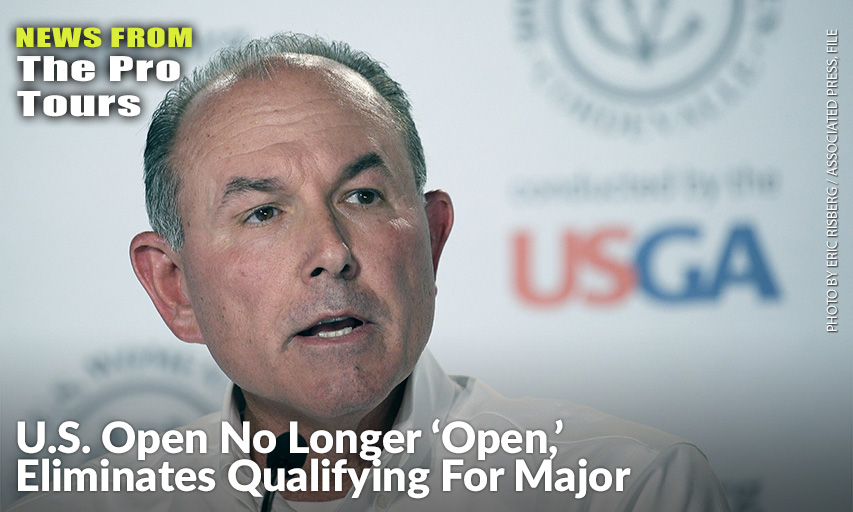 The COVID-19 pandemic, which already has postponed the U.S. Open at Winged Foot from June to September, has forced the USGA to do away with qualifying for the first time since 1924.

It even invested in a marketing campaign that was rolled out in February titled, “From Many, One,” to illustrate that more than 9,000 people apply to play in the U.S. Open, eventually yielding to one winner.

The USGA did not announce how other players would become exempt.

Among those who have yet to qualify is Phil Mickelson, a runner-up six times in the only major he hasn’t won.

Mickelson said in February he would not ask the USGA for an exemption, and that if he didn’t qualify or become exempt, he wouldn’t play. Winged Foot is where Mickelson made double bogey on the final hole in 2006 to lose by one.

The field presumably will be smaller because of the later date, though the USGA did not mention the field size in its April 6 announcement that the U.S. Open was moving to Sept. 17-20 at Winged Foot, in Mamaroneck, New York.

“As you can imagine, this was an incredibly difficult decision, as qualifying is a cornerstone of USGA championships,” said John Bodenhamer, senior managing director of championships for the USGA. “We take great pride in the fact that many thousands typically enter to pursue their dream of qualifying for the U.S. Open and we deeply regret that they will not have that opportunity this year.”

The USGA said there would not be qualifying for three other championships it will hold this year — the U.S. Women’s Open (moved to December in Houston) and the U.S. Amateur and U.S. Women’s Amateur, both still scheduled for August.

When the U.S. Open was postponed, 50 players were exempt through various categories, such as past champions the last 10 years or top 10 from last year’s U.S. Open, major champions from the last five years and the top 30 players who reached the Tour Championship last year.

The pandemic shut down golf on March 13, two months before the top 60 in the world ranking would have been exempt for the U.S. Open. The world ranking has been frozen since the shutdown. It was unclear when it would resume because while the PGA Tour is to resume on June 11, circuits in Europe, Japan and Asia have not said when they would return.

The U.S. Open lost a big part of its identity.

And it has nothing to do with par.

For years, the USGA has boasted — and rightly so — that it was the most democratic of all majors. Half of the 156-man field had to go through some form of qualifying just to get a tee time.

Max Homa won at Quail Hollow last year in a Sunday that featured Rory McIlroy and Justin Rose. A month later, he had to go through 36-hole qualifying for a spot at Pebble Beach and didn’t make it. The year before, Adam Scott narrowly qualified for the U.S. Open, five years and two months after he won the Masters.

The USGA really had no choice but to cancel qualifying this year for the U.S. Open and the other three championships it will try to run while operating amid a pandemic.

The numbers didn’t allow for it. For the better part of a decade, at least 9,000 players signed up for the U.S. Open. A majority of them would have had to go through 18 holes of local qualifying at 108 golf courses in 45 states and Canada. What followed was 36 holes of sectional qualifying at nine courses in the U.S., one each in Canada, Japan and England.

But in losing the identity of being “open,” at least the U.S. Open won’t gain an asterisk.

Assuming the 120th edition can be played this year — it already has been postponed from June to Sept. 17-20 at Winged Foot in New York — the field will be stronger than ever. The winner will have passed golf’s most thorough examination, unofficially known as the “toughest test in golf.”

Even so, the greatest loss is hope.

Never mind that only four U.S. Open champions have had to go through qualifying over the last 50 years, the most recent being Lucas Glover in 2009.

The word “qualifier” these days conjures up images of guys rolling into a parking lot to try to get into a PGA Tour event. Glover was a PGA Tour winner who was No. 71 in the world.

Glover reached the Tour Championship last year, making him exempt for this U.S. Open. He still felt for the players who won’t get a chance to qualify, his path 11 years ago.

“It takes away a little from the flavor of the true Open,” Glover said. “If I was on the outside looking in, I’d be upset. But I’m not. It’s what we have to do. It stinks for the guys who won’t have an opportunity.”

Jason Gore, who now works for the USGA, had to go through both stages of qualifying in 2005. He made it to the final group at Pinehurst No. 2 as the No. 818 player in the world, only to close with an 84.

Even more remarkable might have been Olin Browne. He opened with a 73 in sectional qualifying in 2005 — a score that felt like 80 at Woodmont Country Club in Maryland — and was about to withdraw until he thought quitting would set a bad example for his son. So he played the afternoon round. He shot 59 to qualify.

Twelve days later, he was tied with Gore going into the last round, playing in the penultimate group with Michael Campbell, who won that day (Campbell also had to qualify). Browne had one of nine scores in the 80s that day, a group that included Retief Goosen and Graeme McDowell, who would win the U.S. Open the following year.

“It goes against the grain of the declared,” Browne said. “It’s the U.S. Open. Half the field every year is qualifiers, and there’s some great stories.”

Andy Zhang got into Olympic Club in 2012 when he was 14. Tadd Fujikawa went through two stages of qualifying for Winged Foot in 2006. Michelle Wie even tried that year at age 16, missing by five shots.

Rocco Mediate was 45 when he qualified for Torrey Pines in 2008 and was one clutch from Tiger Woods on the 72nd hole from being a U.S. Open champion.

Browne questioned why the USGA would proceed without qualifying to stage four events — U.S. Open for men and women, U.S. Amateur for men and women — while canceling mid-amateur, junior and senior championships.

Everyone has bills to pay.

Still to be determined is how the USGA decides who will be exempt beyond the 50 who already are.

Most intriguing, of course, is Phil Mickelson. He has been among the most critical of the USGA with words and actions, such as swatting a moving ball on the 13th green at Shinnecock Hills two years ago.

Mickelson was at No. 61 when the world ranking was frozen in March because of COVID-19. The top 60 a month before the U.S. Open are exempt from qualifying. A player of Mickelson’s stature — a five-time major champion — typically gets a special exemption. He said in February he wouldn’t accept one.

Wiping out qualifying leaves nearly 100 spots to fill, and it would be hard to imagine Lefty being left out. Winged Foot in 2006 was where Mickelson made double bogey on the final hole to finish one shot behind in the only major he hasn’t won.

It’s already been a year hard to fathom in so many ways.