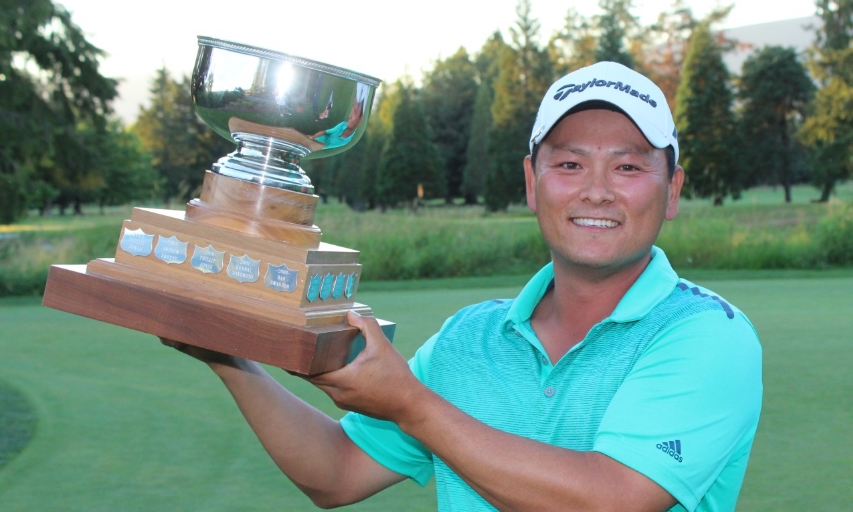 (Brad Ziemer/British Columbia Golf) — His opponent opened the back nine with an albatross, so John Shin knew he had to respond with a big finish of his own. How does birdie, birdie, eagle sound? It got the job done for Shin, who made like Jordan Spieth at the Open Championship with his finish at the Golden Ears Men’s Invitational at Pitt Meadows Golf Club.

Shin, who closed with an eight-under 64 to finish the 36-hole event at 11-under par, won by two shots over Eugene Wong. It was Wong who registered that two on Pitt Meadows’ par 5 10th hole. Vancouver Golf Tour commissioner Fraser Mulholland said he thinks it is the first albatross recorded on his tour.

Shin’s great finish started on the par 3 16th hole, where he sunk a long birdie putt. “Then on 17 I hit a good shot to eight feet and made that one,” Shin said. Shin came close to an albatross of his own on the par 5 18th hole when he stuck a 6-iron from 185 yards a foot from the hole. “The last hole was really special,” said Shin, a Langley resident who teaches at The Lab at Northview Golf Club in Surrey.

“This is a little redemption for me. A couple of years ago at this tournament I shot 65 the final day and tied Nathan Leonhardt, who had a birdie-eagle finish. We went to a playoff and I lost. It feels good to come out ahead.”

The 38-year-old Shin earned $2,500 for the win, which should help pay for some baby furniture. Shin and his wife are expecting their first child next month.

DOUBLE EAGLE: Wong’s albatross was a first for the North Vancouver native. “They are pretty rare, much harder than a hole-in-one,” said Wong, who had 195 yards left and hit a 5-iron. “It happened so quick,” he said. “I hit my shot perfect, right at the flag, and it went one, two, three and rolled in.” Wong made $1,500 for his second-place finish. “John had a great finish, birdie-birdie-eagle,” Wong said. “I give it to him. That’s great.”

JUNIOR ACHIEVEMENT: British Columbia’s team at this week’s Girls Junior America’s Cup in Las Vegas has a tough act to follow. Last week, the B.C. boys won their Junior America’s Cup at The Home Course in Dupont, Wash. The B.C. team of Nolan Thoroughgood and Keaton Gudz of Victoria, Callum Davison of Duncan and Tristan Mandur of Mill Bay beat Southern California by three shots to win the team title.

Thoroughgood, the 2016 B.C. Amateur champion, led the way with a 54-hole total of eight-under par that won him the individual title by four shots. The girls competition begins at Reflection Bay Golf Club in Las Vegas. Team British Columbia is comprised of Kathrine Chan of Surrey, Tiffany Kong of Vancouver, Tiegan Taylor of Kelowna and Cecile Kwon of Maple Ridge. Kelowna’s Pat Thompson is captain of the B.C. team.

STAYING PUT: It doesn’t look like the RBC Canadian Open will be returning to Vancouver any time soon. New Golf Canada CEO Laurence Applebaum said on the weekend he prefers the tournament be held at a permanent site in the Greater Toronto area. Glen Abbey Golf Course in Oakville, Ont., will once again play host to the tournament in 2018.

Glen Abbey is expected to be redeveloped for housing in the not-too-distant future and Golf Canada has begun looking for a new Toronto-area site for the event. A new course could be built to accommodate the Open, which was held at Shaughnessy Golf & Country Club in Vancouver in 2005 and 2011.

LUCKY 13: Surrey’s Adam Svensson and Roger Sloan of Merritt had solid finishes at the Web.com Tour’s Digital Ally Open in Overland Park, Kan. Svensson and Sloan both finished the event tied for 13th at 16-under par. That was nine shots behind winner Zecheng Dou of China. Sloan moved up three spots on the money list to 41st, while Svensson jumped nine spots to 57th.

NEW OWNER: The Vancouver Golf & Travel Show has a new owner and a new name.The National Golf Course Owners Association has bought the show from previous owners Owen Hoskinson and John Tipping of Seattle-based Cascadia Events. The show will be rebranded the Vancouver GolfExpo and will run February 17-18, 2018, at the Forum building on the Pacific National Exhibition grounds.