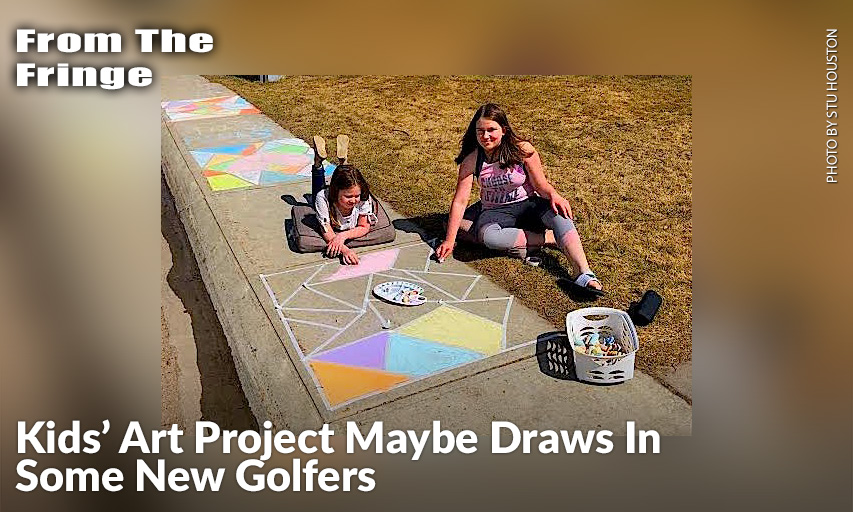 In the world of golf and the efforts to grow the game it doesn’t matter where kids begin to play, or why they begin to play, as long as they do play. And while not all the kids that took part in a special COVID-19-inspired golf outing may stick with the game, there is a chance that a few might just turn into golf addicts as they grow up.

A sidewalk art project, brought forward by Stuart Houston, the mayor of Spruce Grove (AB) with backing from his city council members, saw over 30 youngsters get a taste of golf thanks to their  creative side. As Houston explained, this was supposed to be a contest with a few ‘winners’ that blossomed into a win-win-win situation for the kids, the community, and the host putting course where they ‘teed’ it up.

“This came to me one night. I was thinking of something that we could get the kids (of the city) to participate in. Give them a little challenge. We put this out on Facebook,” explained Houston, about getting the kids involved. The end reward for their art was either a golf outing or a horseback ride. As it turned out, 42 youngsters drew into this idea with the majority choosing the golfing prize. Given the safety measures in place regarding large groups, the contest ‘winners’ were split into two groups.

Many of those golfers tested their skill on the 18-hole course at Putting Horse Ranch, just outside of Spruce Grove. Of the kids interviewed, many had tried golf — at least mini-golf — at one time or another and said they really enjoyed the game.

Lily, who had experienced the game before, and enjoyed the day playing alongside the mayor, said her artwork was a drawing of “COVID-19 Strong and we drew a heart to say “thank you” to the paramedics and we drew a person with mask and gloves on.” 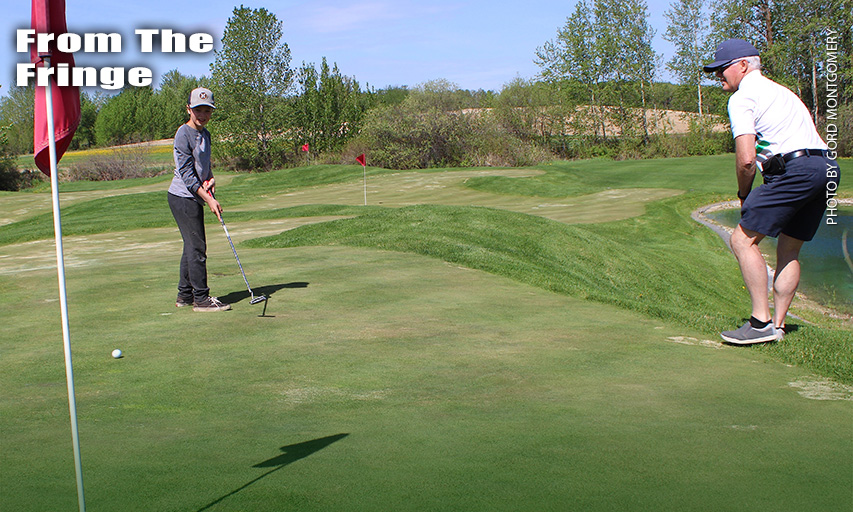 As for Alana, she began by saying “This is the first time playing real golf. It was fun!” and promised she’d keep playing the game. As for artwork, her creation involved a depiction of the solar system.

Next on the interview tee was Koen, who noted he’d golfed before but wasn’t sure where that was. As for this day, he said he enjoyed the challenge the little putting course presented. “I haven’t played here before but it was fun,” noting he’d “probably” keep playing because “it’s fun.”

The two smallest participants in the group, Haley and Ella, both agreed they had fun both with the artwork and the golf. Haley, who was new to the game, said she liked the course and would likely play the game again while Ella noted, “I have actually golfed before. It’s really fun.”

In speaking to how this idea played out, with sidewalk art quite prevalent in many neighbourhoods throughout the city of 36,000, Houston said this was simply an idea to make the kids feel proud of their art and their city in a difficult time. 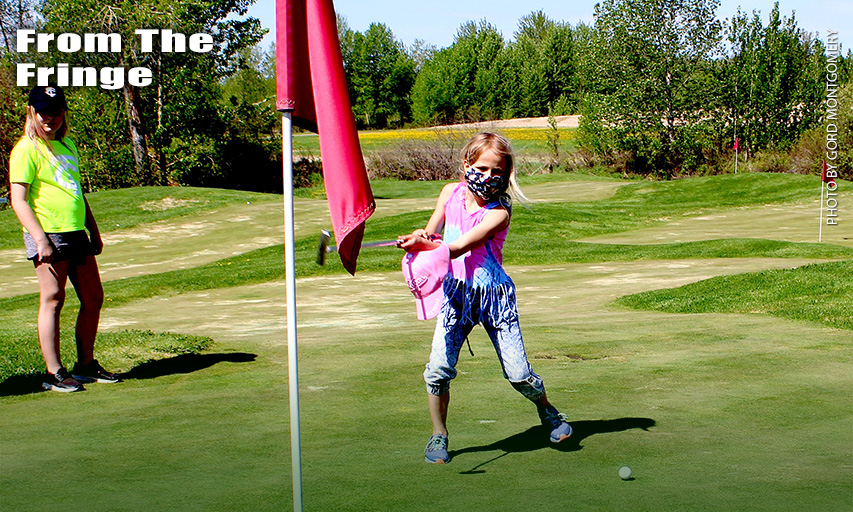 Sometime You've Got To Really Whack The Ball To Get It To The Hole, As Demonstrated Here By This Player During Her Sidewalk Art Round At Putting Horse Ranch.

“When we first came up with the idea we were going to award 12 kids with the golf. Then, we started to get into it and all the artwork was so good with so much effort put into it, and through the sponsorship of Chris and Liz at Putting Horse Ranch who agreed to sponsor all the kids for a round of golf so anyone that put artwork in actually won!”

As for introducing the kids to the world of golf in this manner, the mayor said he felt this was an idea that benefitted all involved.

“Yeah, this (golf) is a great activity and as we know golf is a great game. This was an ideal venue for this. It’s a challenging little course that gives the kids the concept of moving the ball toward the hole.

“The other great thing is there’s a three-hole course here, a par-3, a par-4 and a par-5,” so the kids, if they choose to stick with the game, can advance to play there as they continue to develop their skills in the game.

The mayor ended by noting, “This is a great for young kids and families,” and a great way to introduce the youngsters to the game to foster their love for the sport through something as simple as drawing pictures on a sidewalk.’’