LPGA Tour To Resume With Plenty Of Testing, Maybe Some Fans 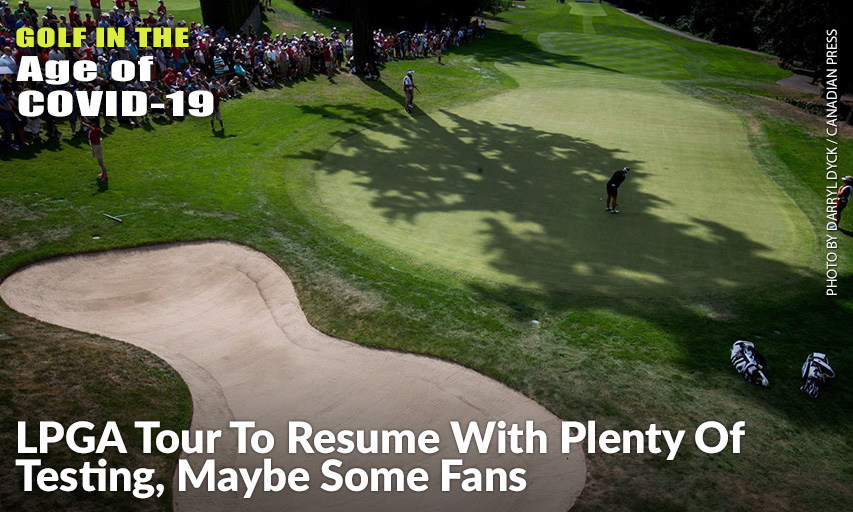 DUBLIN, Ohio — The LPGA Tour is ready to get back to work for the first time in nearly six months with a plan that includes saliva testing for the coronavirus and no illusions the rest of the year will go smoothly.

The LPGA Tour was last played on Feb. 16 when Inbee Park won the Women’s Australian Open. Three tournaments in Asia were halted, and then the COVID-19 pandemic shut down sports.

Four of the five majors were moved to later in the year — the Evian Championship in France was cancelled — and the tour already has lost 13 tournaments. Some of those cancelled events, in a show of support for the tour, have pitched in financially to help those that can play.

“I fully believe we’ll lose another event or two or three along the way,” Commissioner Mike Whan said. “I couldn’t really tell you which ones, but it would be probably naive of me to think we are just going to roll through our season and roll through different countries and be able to play exactly as we have slated.

“But I’m excited about what we have.”

Whan and his staff have been in constant contact with the PGA TOUR, now in its sixth week back.

The LPGA Tour is to resume July 31 with the LPGA Drive On Championship, a one-time event with a $1 million purse at Inverness Club in Toledo, site of next year’s Solheim Cup. It’s where Paul Azinger won the PGA Championship in 1993.

The Marathon Classic follows in nearby Sylvania, and Whan hopes by the end of the week to learn whether it will have fans. The Memorial on the PGA TOUR was supposed to be the first golf tournament with fans, a plan that was scrapped two weeks ago as cases spiked and players weren’t comfortable with widening the bubble.

Whan said the Marathon Classic would have a small footprint — no more than 2,000 fans — and two pro-ams (one on a different course) in which all amateurs would be subject to testing.

Players, caddies and essential staff would have a saliva test a week before the tournament, and another when they arrive, along with thermal screening and health questionnaires. The turnaround won’t be as quick as it is on the PGA TOUR, which has a mobile lab on site. The LPGA said a player tested Monday would get the result back by 3 p.m. Tuesday.

In the meantime, medical advisers said players would be fine to practice on the course, keeping their distance, while waiting on the results.

And he fully expects there to be positive tests.

“It is strange to get started in a time in which we know we’re going to have positive results no matter what we build,” he said. “It won’t be anybody’s fault. But positive results happen, so spending as much time as we are on what happens when they are positive is a strange time as a commissioner. But we are trying to make sure that we’ve built all the resources that they would need or we would need in going through these things.”

He also said caddies would be optional for the rest of the year, though Whan expects most players to keep someone on the bag. It was another example of giving players an option in terms of guarding their health.

After two weeks in Ohio, the LPGA heads to Scotland for the Ladies Scottish Open at the Renaissance Club and the year’s first major, the Women’s British Open at Royal Troon, before returning to Arkansas. After a week off comes the second major, the ANA Inspiration in the California desert from Sept. 10-13.

He said some players are eager to play, while others are cautious. Some international players might wait for Scotland.