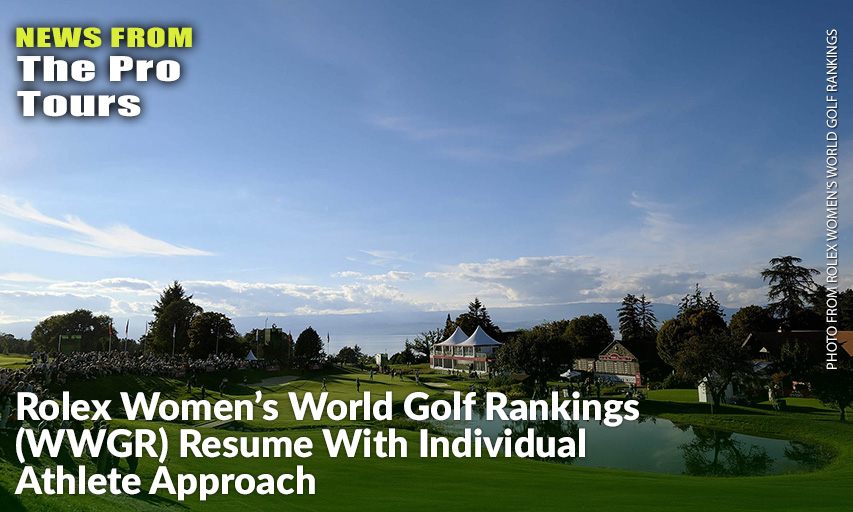 The Rolex Women’s World Golf Rankings (WWGR) Board of Directors announced a plan to resume the rankings with a temporary modification which focuses on the individual athlete and the weeks when she competes.

With the modification, on a week an athlete competes, her individual points, average points and divisors will continue to change and age based on her performance and her overall position on the Rankings will be reflected based on that performance.

On a week when an athlete does not compete, her individual points, average points and divisors will not change or age. However, her overall position on the Rankings could shift based on the performance of other athletes who are competing.

“The WWGR Board was keen to find a solution that was as fair as possible for the majority of athletes whether competing or not during this unprecedented time. As a level of uncertainty around Member Tours’ tournament schedules continues, focusing on the individual athlete and the weeks she competes made the most sense.” said Executive Director of the WWGR Board, Heather Daly-Donofrio. “While the Board understands there is no perfect solution in these challenging times, we believe we landed on an approach that is reasonable for athletes and also protects the integrity of the ranking system.”

Weeks between March 16 through May 11, when there was no tournament play, will not be factored into the 104-week rolling period for any athlete on the Rankings. The WWGR will be run in chronological order backdating to the start of the KLPGA schedule. Rankings for each week thereafter will be published but only recalculated on weeks where at least one Ranking tournament was completed.

During this approach, weeks of non-play for any individual athlete that happened during the pause will continue to be omitted until the player has a full 104-week period of Rankings tournament play.

The Rankings will revert to its historical approach of running Rankings each week regardless of tournament or athlete play in due time. The WWGR will continue to monitor when this will happen based on the restart of its Member Tours and the participation of the top 200 athletes on the Rankings.