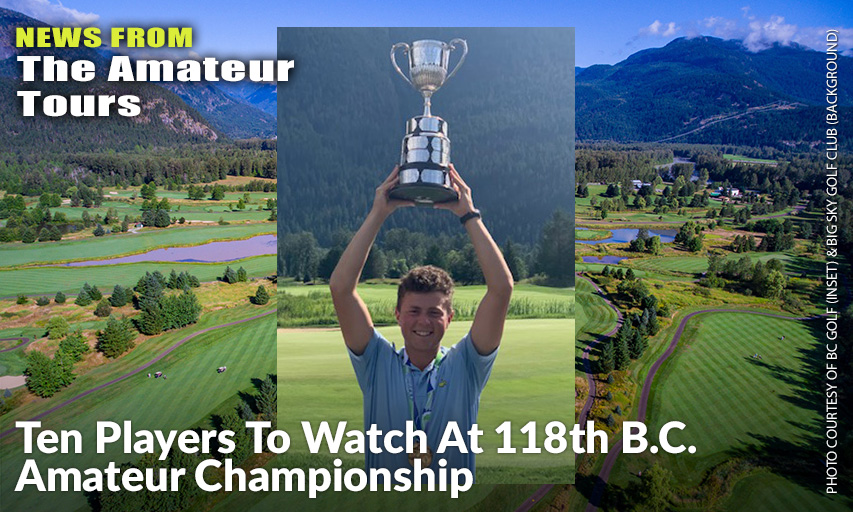 The 118th B.C. Amateur Championship begins July 28, 2020, at Okanagan Golf Club’s Bear course in Kelowna. This year’s event is 54 holes, not the normal 72, with no cut. The Junior Boys and Mid-Amateur championships are also being contested at Okanagan Golf Club. The 156-player field will adhere to strict COVID-19 protocols that include no caddies and no spectators.

Brad Ziemer looks at 10 players who have a chance to win the B.C. Amateur championship. - ed

Here they are, in no particular order:

Kevin Carrigan: Victoria product has finished third in his last two B.C. Amateur appearances. He’s a two-time Canadian Mid-Amateur champion, so Carrigan knows how to win. It would not be a surprise to see him hoisting the championship trophy on Thursday night.

A.J. Ewart: 21-year-old from Coquitlam is coming off an excellent, albeit abbreviated, freshman season at Barry University in Florida. Ewart tied for seventh at last year’s B.C. Amateur held at Big Sky in Pemberton. It’s probably a safe bet the former B.C. Juvenile Boys champion will finish higher than that this year.

Tristan Mandur: Former B.C. Junior champion from Duncan is about to enter his senior year at the University of Utah. Mandur has finished in the top 10 in his last two B.C. Amateur appearances and tied for 15th three years ago. Mandur figures to a contender again this year.

Cooper Humphreys: Yes, he’s only 15 years old, but Humphreys tied for third at last year’s B.C. Amateur at Big Sky. And he’ll be playing at his home course, Okanagan Golf Club. Humphreys is no stranger to playing in big events. He earned a sponsor’s exemption into last year’s GolfBC Championship at Gallagher’s Canyon and shot 30 on the back nine in the second round.

Dan Swanson: This former pro who was reinstated as an amateur a couple of years ago will be defending the B.C. Mid-Amateur title he won last year at Ledgeview Golf Club in Abbotsford. Swanson missed the cut last year at Big Sky but finished eighth at the 2018 B.C. Amateur at Rivershore in Kamloops.

Jeevan Sihota: Victoria teen is making his first B.C. Amateur appearance since tying for fifth place at the 2017 tourney at Morgan Creek when he was only 13. He’s added lots of length since then and should have plenty of birdie opportunities on the Bear Course. Sihota has a real chance to become the fourth Victoria resident to win the B.C. Amateur in past five years.

Brycen Ko: This 16-year-old from Richmond won last year’s B.C. Junior Boys title at Fairwinds Golf Course in Nanoose Bay where he demonstrated considerable poise and patience on a tight course that was giving many of his fellow competitors fits. This will be the Shaughnessy junior’s first B.C. Amateur appearance as he did use the exemption he earned by winning the Junior title to play at Big Sky.

Nolan Thoroughood: Victoria native became the youngest player, at age 15, to win the B.C. Amateur Championship when he captured the title in 2016 at Pheasant Glen Golf Club in Qualicum. Thoroughood, now playing collegiate golf at Oregon State University, has not finished worse than 20th in three subsequent B.C. Amateur appearances.

Jackson Rothwell: After finishing third at the B.C. Junior Boys Championship and then winning the B.C. Amateur at Big Sky in wire-to-wire fashion, this Victoria resident missed the cut at both the Canadian Junior Boys and Canadian Amateur tourneys. The question is, which player will show up at Okanagan Golf Club.